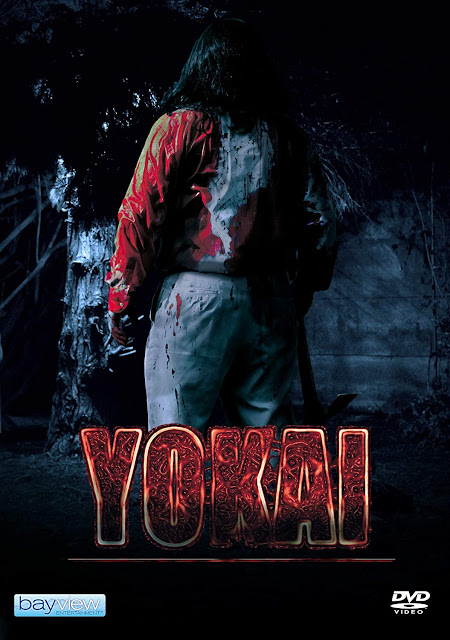 Everyone knows films that are so bad that they are good. The ones you can watch and admire for their sheer badness. With Cristobal Echevensko's Yokai you have a film that is created in such a demented way that it could easily be argued to either be a work of complete genius, or to be a huge mess. I wouldn't go so far as to say this is a good movie, but it is a darn intriguing one that had me delighted with every aspect of how this was put together and plotted.

Lydia (Francisca Sfeir) has a sick sister and needs money desperately in order to help her get better. She also has a friend who has a lot of debts, so together they come up with a plan to get money quickly. Lydia works at a jewellers, for Mr. Yokai (Diego Suazo), a sinister and stern Japanese man who she knows for a fact owns a huge diamond that he keeps in his lightly secured house. She convinces her friend to break in and steal the diamond, but things don't go according to plan, for it turns out Mr. Yokai is a serial killer..

I expected this might play out a little like The People Under The Stairs or Don't Breathe, in that the entire film would take place during the attempted robbery, with the protagonists trapped in the house. Instead I was surprised to see this part was just the first act. It began the surreal nature of Yokai as the characters don't change anything on account of finding out the guy whose house they are stealing from is a sadistic killer. They don't call the police, or even discuss doing so, and they insist on using the most inconspicuous orange car whenever they go to Mr. Yokai's residence. Even better is the fact that the killer knows exactly who the thieves are, and where they live, yet he too is content to play out this bizarre game. Both protagonist and antagonist become complicit in making the film really weird.

I don't know if it was due to not being able to get a Japanese actor, or if it was a stylistic choice but we, the viewer are never shown what Mr. Yokai looks like. He always appears on camera either directly from behind, or with him slightly off screen, such as having him sat in a chair but his head outside the frame. Whatever the intention was it worked, he became an ominous presence, the mystery of just what he looked like adding to the feeling of threat this cold blooded character presents. The scenes where he kills become the most abstract, these feature close-up blurry camera work that made it seem like the cameraman wasn't ready to film, yet again it just works with the off kilter vibe going on. Lydia is a strange heroine, she constantly looks utterly miserable, even when she is putting on a True Lies style awkrard strip tease in which she tries to carry out a blatantly obvious plan under the watchful gaze of Mr. Yokai. Her motivations are clear cut and her reluctance to do anything but the obvious was interesting.

With a run time of around seventy minutes the story doesn't have any down time. It could have possibly benefitted by giving more time to develop characters, but I think the fact that I didn't particularly care who won this battle of weirdo wills helped my enjoyment. Going by the dialogue and what happens here I think this was intended as a dark comedy. Things such as Mr. Yokai assuming the noises Lydia makes as she creeps around his house is actually down to ghosts, and then angrily phoning a business associate to complain that he needs to hurry up and move out of the house due to these constant ghost noises was funny to me. Of course, this being what it is these ghosts actually do make an appearance at several moments, and actually affect the plot. Usually I hope and pray for resolution in horrors, open ended can be annoying. Here though I was hoping for the opposite, and wasn't disappointed as this movie ends with every single plot thread unresolved, it literally just ends midflow, love it! Special mention has to go to the soundtrack, it doesn't fit what is happening at all, and it sounds like the soundtrack to a low budget creature feature movie from the 1940's, too dramatic and tonally out of place.

Yokai really is a strange beast, the story is weird, the characters are weird, the events that take place are all just so weird. It is this refusal to adapt and evolve that made my time with this film such an enjoyable one. I could easily see someone watching this and hating it, or at best thinking it is a poorly made mess, for me though its consistency was what gave me so much pleasure. Yokai is out now on DVD thanks to BayView Entertainment.