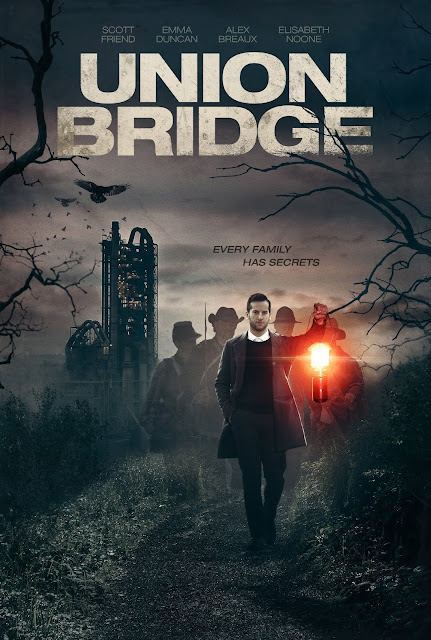 Union Bridge is a hard film to put into a solid genre. This is most certainly a drama, yet it also blurs the line into horror, and even into the historical genre a little bit. For the most part the story is grounded in reality, yet at the edges of this story there are elements of the supernatural. These elements eventually become the leading force in bringing the movie to its conclusion. This was written and directed by Brian Levin in his directorial debut.

Will Shipe (Scott Friend - The Dark End of the Street) returns to the sleepy town he grew up in many years after he left. He had been living in the city and had found some success, however the fast paced life was burning him out. His mother, Jeanie (Elisabeth Noone - voice work on Fallout 4, The Elder Scrolls IV: Shivering Isles) realising this has called him back home to get some rest. Will discovers that in the time since he has been gone, his childhood best friend, Nick (Alex Breaux - Depraved) has developed mental health issues. Night after night Nick heads out into the fields urgently digging for something, something which he said had been shown to him in visions.

This was a very slow burn of a film, there are countless long lingering shots of scenery, of streets, of fields, and of the industrial plant that seemed to be the life blood of the town. The film is so slow in fact that it wasn't until the second half that I could even decipher a story from all this. There are elements of a love story here, Nick growing closer to Nick's cousin, Mary (Emma Duncan - Chicago Med TV series). This also felt like a coming of age story, Will may be in his thirties but you get the impression he is a bit lost in life. Interspersed throughout Union Bridge are short flashback sequences that take place during the American Civil War in the 19th Century. These set up the idea that there may indeed be something buried, and also that Will's family may hold a dark secret in their past. It seemed that the ancestor of Will is actually played by Friend also. This actually becomes a plot point used in attempting to blend the fantastical with the mostly grounded in reality present day sections.

While this was not a dull film I did wonder at times just what the point of it was. As something to chill to I found this comforting, I have a soft spot for movies in which not much really happens, in which there are hardly any raised voices, and which have the long lingering shots of nature. There is a resolution of sort to the story, yet nothing is ever clearly explained, instead you are required to put the pieces together yourself. Anyone expecting any kind of deep resolution may be disappointed, the hidden object, whatever it may be is almost a McGuffin used to bring the story along.

Special effects are kept to a minimum, there are a few guns shot but there isn't any other type of effect needed, save the use of insects at a couple of points (such as the unexplained greenly glowing wasp nest whose inclusion I never got). The acting across the board was good, there was not a standout performance but everyone was fine enough. Personally I enjoyed the flashback sequences the most, I would have liked to see more of those. I also liked the montage sequences of Will drinking with other townsfolk, it helped make him into less of a bland character.

Union Bridge is a hard film to recommend. It isn't flashy and its story seemed inconsequential, more as a way to provide some beautiful filming (some lovely cinematography here). If you are after a film to relax to, and which doesn't require much of your attention this one may be just the ticket. Union Bridge is set open in Los Angeles on May 15th, and will come to DVD and VOD platforms on May 19th thanks to Breaking Glass Pictures.