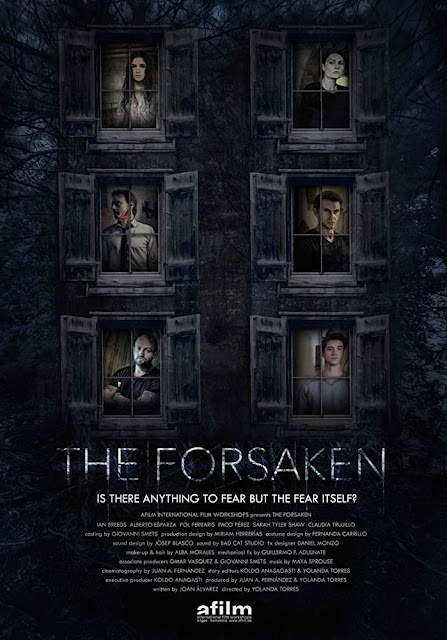 There are few things better than when a film you have zero expectations for blows you away with its quality. Such was the case with Yolanda Torres's The Forsaken (the director of The Odd Perspective, and co-director of The Afterglow). I was hooked from the very first shot of the movie, all the way to the end credits, I just could not look away.

A band of criminals that include among them, Mr. Bodie (Ian Breed - The Afterglow), Mr. Quartermass (Paco Perez), Mr. Blake (Pol Ferraris), Mrs. Peel (Sarah Tyler Shaw - The Afterglow), and Number Two (Alberto Esparza - Anunnaki The Fallen of the Sky) arrive at an abandoned house deep in the the Spanish countryside. They have very recently kidnapped the daughter of a wealthy businessman (Sara, played by Claudio Trujillo) and the house has been chosen by their boss as a place to lay low until the ransom is paid. It is not too long into their stay when they begin to notice strange things occurring, names written in blood mysteriously appear, strange noises can be heard coming from the locked basement, and not one of them is able to make a conscious effort to exit the house. The door to the property is unlocked, but each person is strangely unwilling to leave. It soon becomes apparent there is something evil lurking in the house, something that can see into the soul of a person and see the true ugliness lurking there. 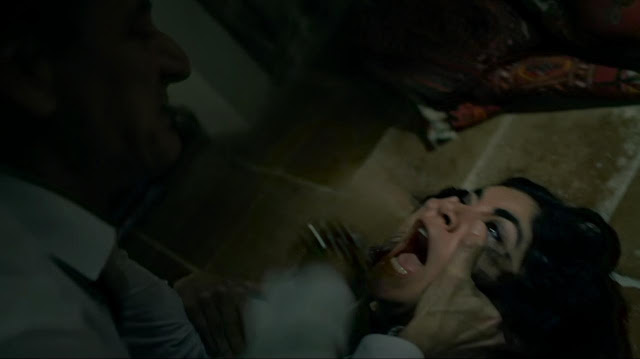 I loved this movie, I'm so glad it remained consistently atmospheric and thrilling throughout. As it got towards the end I was praying that it wouldn't drop the ball, and indeed it doesn't. The singular location, along with the survivors of a botched crime, and their hostage of course, was a similar concept to that used in Reservoir Dogs. Add in a stunning soundtrack that felt like a lost John Carpenter classic (most resembling the theme tune to The Thing with added sinister whistling) and a cast of characters who just about managed to stay the right side of cliche and you have a slow boiling horror show that constantly had me wondering what was going to happen next. The opening of a camera zooming in on the house, and then slowly sweeping around the rooms added atmosphere before things even started, this brought to mind the beginning of The Evil Dead. Then for the films finale there is a sequence that reminded me a lot of the ending of Return of the Blind Dead, no bad thing.


The film soon settles into its formula, each new name that appears written in blood on the wall signifies another character who is going to fall under the evil's control. The dread the characters feel each time a new name appears is palpable. I expected to dislike these characters, especially with them having kidnapped a girl. However they were not as mean and horrid as I first expected. Over the course of the movie their paranoia and mistrust spreads, but they are unified in the knowledge that they are facing an outside threat. There is a body count here but blood is used sparsely, even so the effects are effective enough to sell the violence going on. A highlight being a character who ends up with a pair of scissors through their eyeball! I liked how it wasn't the usual possessed person going homicidal, instead it felt more psychological, like each person was being judged for their hidden sins. There is a great moment where Mr. Quartermass asks Mrs. Peel when was the last time she was able to look at herself in a mirror. He goes on to say that it reaches a point nowadays where he has to turn away from his reflection. This fits into the whole theme of the movie in which these characters are being forced to confront their inner demons. The Forsaken even manages to fit in a part of H.P Lovecraft's Fungi from Yuggoth sonnets, these worked well in context.

Not much really happens here, there isn't much character development and yet this was directed and edited in such a tight way that there was nothing here that felt like it wasn't needed. Each movement of the characters, each line of dialogue seemed essential to creating a picture of the predicament the characters were in. The notion of something unknown stopping characters from even being able to attempt to open the front door, or the basement door was sold well. It might be a little predictable with who survives and who doesn't, but culminates in a satisfying way. Especially a later scene in which the viewer is finally shown just what is lurking in the basement. This is Lovecraft brought into modern day, not to say this is a scary film, but there is certainly an unsettling feeling, the house felt like a hostile thing, rather than just a location for the film.

I was completely neutral going into The Forsaken, and so it was with great pleasure I discovered just how fantastic this was. Occasionally the characters may seem a little bit too generic, but the situation they were in, and the atmosphere the film conjures makes for something really special. The Forsaken will be made available on Vimeo.