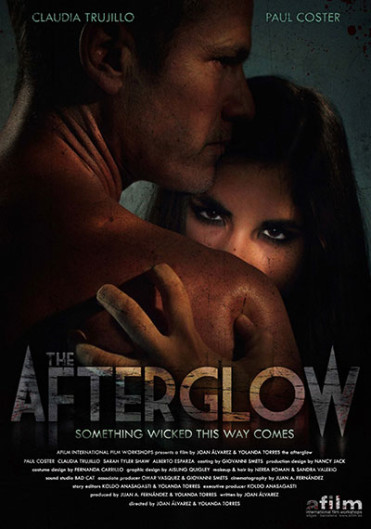 After having seen and enjoyed Yolanda Torres's horror film The Forsaken I was interested to see how other films of his compare. The Afterglow is a horror he co-directed with Joan Álvarez Durán (who also wrote the story for this one), and it features a few of the same actors from Torres's other film.

After his brother dies of an unknown illness, Oliver (Paul Coster - Cyborg Invasion) discovers he had been living with a young woman, Laura (Claudia Trujillo - The Forsaken). This woman had apparently tried to kill herself after finding his brother dead, and while she survived her attempt she has lost all memories of who she once was. Oliver decides to help Laura recover, hoping she will regain her memories and be able to give more details of his siblings final days. The more time they spend together the more they begin to fall in love, but it seems the closer Oliver gets to Laura, the more sick he also begins to get... 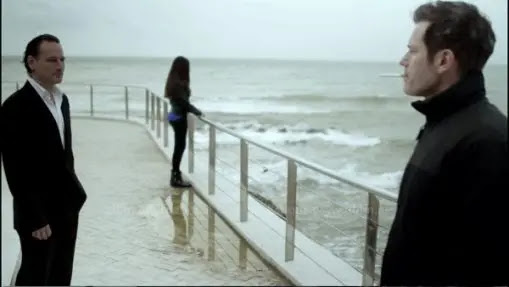 The Afterglow is certainly not a fast paced horror, the story moves at a glacial pace and its story remains wrapped up in a mystery. This was a mournful film that has at its core a love story, but one that is draped in melancholy and loss. It keeps with it an ever present sorrowful piano score that occasionally seemed a little heavy handed but sure helps this keep its bittersweet edge to it. The film centres squarely on the two main characters, the older Oliver, a successful author who finds himself drawn to the mysterious, younger Laura. Then there is Laura herself, someone who is a blank slate due to having lost her memories. Just who she was, was a question that kept me drawn to this, whether she was malevolent or innocent kept me guessing. Don't expect any moments of thrilling horror though, outside of some nightmare sequences that features a reoccurring man speaking in riddles, and a flashback sequence showing Oliver as a child seeing a ghost, it is all just suggested.

The film spends nearly every scene with these two main characters, but was nice to see a couple of familiar faces from The Forsaken here, Ian Breeds plays a hypnotherapist in one pivotal scene, and Sarah Tyler Shaw also features in a small, yet important role. The budding romance between the two leads felt natural in how it unfolded but I felt that the character of Laura had the potential to be more sinister than she ever felt. Lost and confused as opposed to secretly malevolent, the character had a few great scenes, the hypnotist visit being one of them. Generally the dialogue between characters was nothing too special, but outside of an overly dramatic argument it was fine enough. The Afterglow succeeded in building up a layer of mystery, with enough evidence dripped throughout the story to keep you questioning things. This was only ever designed to be a sorrowful slow boiling drama, and so while I wish it had had more bite to it I appreciate it for what it was.

The Afterglow was another decent film from Torres with good performances from the two leads. While I would have liked the story to go somewhere a little differently than where it did I still found the films story to be a compelling and memorable one. The Afterglow will be made available on Vimeo.