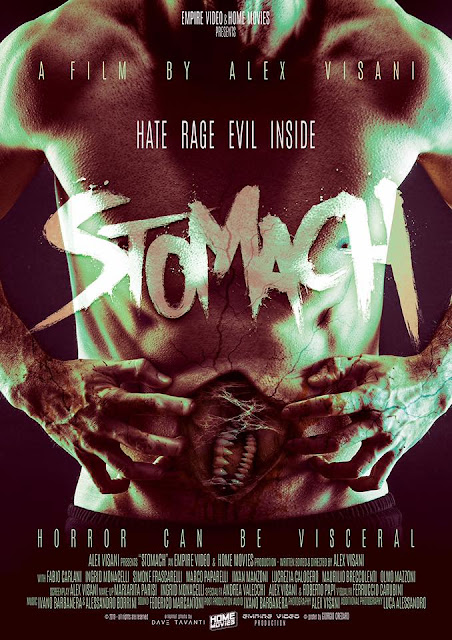 Stomach is an Italian body horror that comes from Alex Visani (The Pyramid, Mindcreep) who both wrote, directed and did a lot of other jobs here. I'm not usually one for body horrors, and this one tells a story that for much of the running time was a bit abstract and hard to get my head around, however it was well made and I liked where this went.

Alex (Fabio Carlani) is a loner who hides a terrible secret. There is something not right with his stomach, and certainly not a normal medical condition. When his darkest emotions get too much for him they physically manifest in the form of a demonic stomach creature (Carlani also). Alex keeps himself to himself and works small menial jobs, however an incident at his work place results in the demon once again manifesting. Alex finds himself on a desperate race against time to stop his monster before it gets to the objects of his desires, a woman he works with named Anna (Ingrid Monacelli). 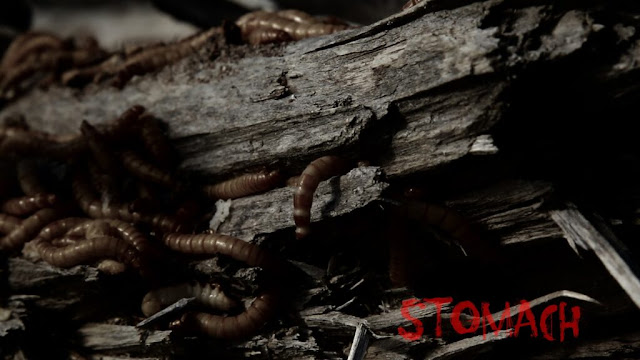 Stomach is a bloody reimagining of the classic Jekyll and Hyde story. Alex himself is meek and timid, but instead of turning into a monster his ugly side manifests to commit the deeds he would not dream of. Due to this duality of the two beings there was an almost arthouse style contrast between their actions. While the demon is out killing and raping, Alex is shown to be at home, writhing around in agony. The way the character acts makes for a protagonist who isn't that likeable, but with such an odd story he needed to be odd himself. The story is very low key in that it takes place over the course of a few days and is restricted to just a handful of characters. Stomach can be quite a nasty film, and this is shown with such things as multiple rape scenes, one of which was particularly nasty to watch. There are no strong female characters here, all of them are shown to be either subservient to the male figures in their lives, or to be dominated physically by the male characters. To be fair though there are also no good male characters here, a variety of abusive and mean spirited ones populate Stomach.

There was a lot of blood and gore here, resulting in some satisfying moments that had special effects that were pretty decent looking. Highlights include a character getting fed their own intestines, and a head that is ripped off a character, a series of quick cuts hiding this effect, particularly nice was the spurt of blood coming out the stump! For the creature itself it reminded me a bit of a flesh coloured morphsuit with lots of veins on it. That is a bit of disservice, the creature looks decent, the pointy teeth I liked as well. With a lot of the movie taking place at night it could on occasion be a tiny bit difficult to tell some of the characters apart at times. This felt like an eighties exploitation horror in terms of the themes, but the look is very modern. The picture quality was always sharp, and it had some good choice for the music, the death metal style end credits song was strangely fitting.

The plot itself was simple but effective. I think it was kinda obvious where this was all heading but it has such a weird way of telling the story that it didn't feel that predictable regardless. Alex and his stomach monster are presented to the viewer with no fanfare, so it was puzzling exactly what was going on, but I think that was the point. The idea is of course ridiculous, but this is played seriously and it manages to work.  Monacelli was the stand out actor here, in particular the whole third act she does a very good job of selling a horrific couple of scenes, managing to give a physical and verbal performance that seemed authentic. While this is in Italian with English subtitles the acting seemed to be strong across the board. Alex was not a compelling protagonist though, he felt like a personality vacuum that was too hard to identify with.

Stomach succeeds as a much more bloody take on a classic story, and features some strong moments of body horror and bloody mayhem. It is brought down by the bland protagonist, and a story that is a little too simple. Even so, this remained a brief feeling yet fun horror. Stomach was released on DVD and Blu-Ray in Italy last year, it will soon be distributed in North America and Canada.

Why so many words? This movie is simply a great mountain of shit, very simple!

Two things, firstly it would look like a spam post if I summed it up like that, secondly I would also need to add reasons why it was to back up my opinion! Thanks for the comment though :)