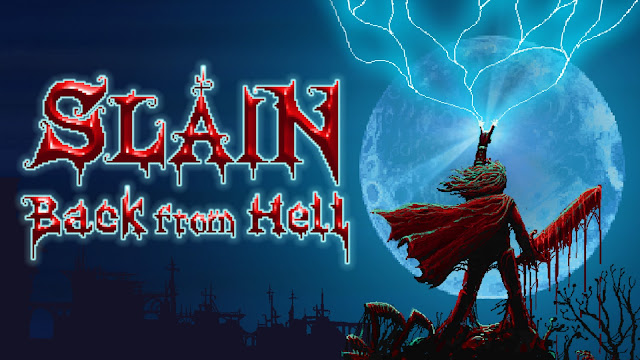 I have gotten to the stage where both my hard drive and external hard drive on my Playstation 4 are totally full up. I had been dipping my toes into various games I owned to see if they felt like ones I could easily get through. Upon playing Slain: Back from Hell I soon realised I was totally addicted it, eventually I played through the whole thing in around four different play sessions.

The game takes place in a dark fantasy world in which the all powerful Lord Vroll has conquered the lands with his army of monsters. The world has been completely consumed by evil with nothing but darkness and death around every corner. An angel like being resurrects an ancient hero and tasks him with setting forth from his tomb and defeating Lord Vroll. 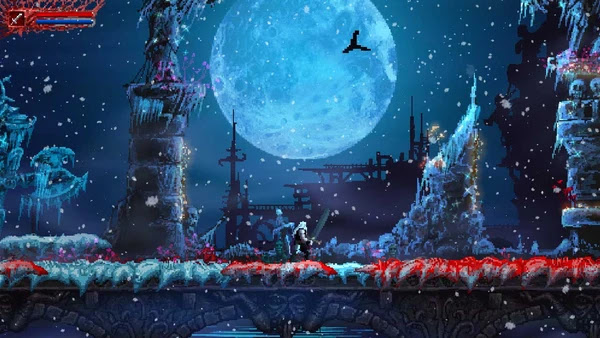 The first noticeable thing about Slain: Back from Hell is how damn beautiful it is. This is a 2D hack and slash adventure game that is displayed in gorgeous pixel art. The levels appear as living locations, they are layered in so much detail, from blood rain sweeping across the sky, to undulating slime. Horror rarely looks this attractive. Playing this I was reminded of the early Castlevania games. You sword wielding character is about the same size as the characters in those games, and action plays out in a similar fashion. It also bizarrely reminded me of Hotline Miami. This is a game in which you will die a lot, a heck of a lot, and so when everything comes together and you finally get through a tough area, avoiding all the traps, killing all the enemies it feels really quite satisfying.

As you progress you learn a few different moves, but not anything overwhelming. You have a charge attack, you can shoot magic projectiles, and you get the ability to change the element of your sword from steel, to fire, and to ice. Each enemy type is weak against a particular element. Witches for instance burn up pretty well, while skeletons and ghosts are more weak against traditional steel. You can also reflect back projectiles that enemies fire at you, this becomes a key part of the gameplay loop, especially when dealing with mages, and the fire and ice beasts. Some enemies can be opened up for a powerful attack should you be able to block their own attacks. It is all simple but things get mixed up enough that it was always fun to do. The levels have frequent checkpoints, so as hard as this game can be you are always slowly chipping your way through. This even applies to the end of game boss, it is a three stage affair, but handily it saves your progress after each stage. On the surface Slain: Back from Hell seems like a very tough game, but these design choices really stop it from being frustrating. Normally when you die it is up to you, the player, not taking the appropriate care rather than anything else. 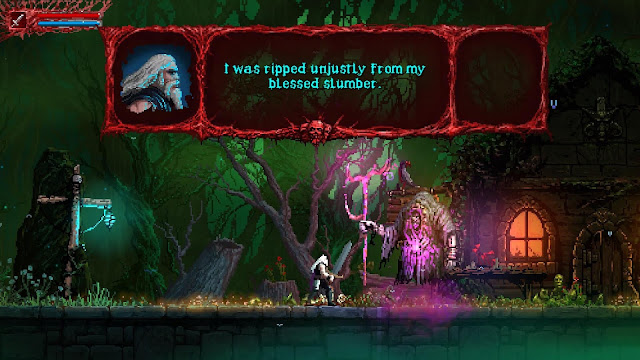 The game takes place over around ten levels, many of which can be accessed from a little hub world. I didn't really see the point of this hub world as it seems to give the illusion of choice, but in reality there is only ever one level at a time you can access. The levels are varied with each one having its own distinct look and sound. These levels include a slime covered sewer, a tower of ghosts, highlands, forests, and of course the Castlevania style assault on Lord Vroll's castle. A nice addition is the intro text you get when starting each level, this adds characters to the heavy metal hellscape you are fighting through. Talking of heavy metal, that is the games soundtrack, it is like cover art of music albums has been brought to life. Not really my sort of music but it never irritated, and plays constantly, even when you die the track continues on. The levels require simple puzzle mechanics, such as flipping switches to open doors, occasionally you will get trapped in a room and forced to defeat a whole host of enemies, I found these parts to be the most dull sections.  The story was very basic, this was to be expected, but despite the depressing sight of a world completely overtaken by evil there is a weird playfulness with the dialogue that adds moments of humour that I didn't think was the right approach to take.

The best thing Slain: Back from Hell has going for it is how addictive it is, there are zero load times, and so even if you are repeatedly dying there is never the sense that you are wasting your time. I loved the look of this game, and I had a lot of fun playing it, however I didn't feel a need to return to it once it was all over. A difficult game at times, but also one that I had a lot of fun with.

Posted by Daniel Simmonds at 07:35