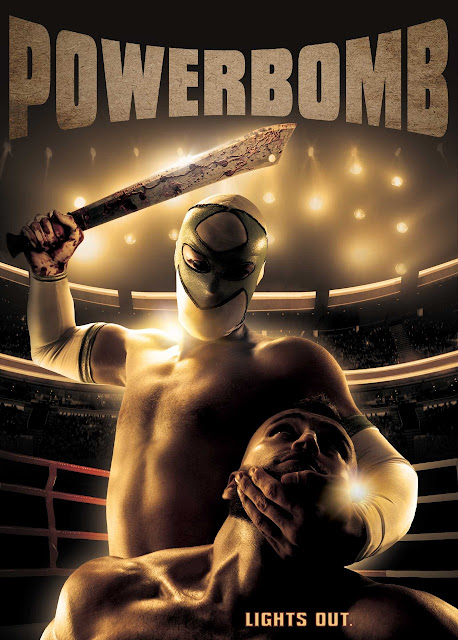 Pre lockdown here in the UK I would usually get drunk with a friend every two weeks on a Saturday, working our way through the WWE Network back catalogue of PPV's chronologically as we did so (I believe we are currently in 1991). Hearing there was a new horror out that melded wrestling and horror together I was interested to see how it would work. Things start off well with co-directors, R. Zachary Shildwachter and B.J Colangelo's Powerbomb, it starts off with a cool wrestling match, but the pace soon significantly changes into something far more talky than I expected.

Matt Cross (played by Matt Capiccioni who wrestled under the name Matt Cross himself) is a competent and experienced wrestler who despite being much loved has yet to make it out of small time independent events. This may well be down to his degenerate money stealing manager, Solomon (Aaron Sechrist) who is deep in debt, something he blames on Matt's wife, Amy (Roni Jonah - a wrestler herself I believe) who left the business in order to look after her and Matt's young son, Cash (Cash K. Allen). One night after a match Matt is ambushed and kidnapped by Paul (Wes Allen, who also wrote the story). Matt awakens to find himself chained up in Paul's basement. His abductor reveals himself to be a superfan, and that he has captured his idol in order to train him up to superstardom by any means necessary...

Powerbomb was a bit of a strange movie. This was due to how talky this was, and how little action there is compared to what I expected. Cross may be the protagonist here but it is Paul who seemed to be the real heart of this movie. Much of the film, a good chunk of the middle section in particular was almost like a video essay. There is scene after scene of Paul monologuing about the essence of what wrestling is, why it appeals to fans, the empowering it provides. It comes across as very preachy, but in a way I found kind of fascinating, Allen must be a real life wrestling fan to frame wrestling like he does. Paul is 37, overweight, and still lives with his mother, spending his wages on Japanese porn and wrestling memorabilia. While he appears quite insane, especially with regards to Matt, who he sees kind of like a performing monkey rather than an actual person. There are scenes however where he reveals that he really doesn't like himself. Perhaps one of the best scenes in the movie has Paul looking into a mirror, doing a fake wrestling promo, while he holds a hand puppet who berates him for all his real failings in life. He made for a good adversary as he is almost the opposite of Matt. Matt is in good shape, he has a loving family, and good friends. Paul on the other hand isn't in good shape, hates his family, and is all alone in the world. Capiccioni wasn't bad in his role, it was just that Allen was a much more captivating character due to being more layered. The most we get out of Cross is a very interesting monologue about his childhood, but then this is later revealed to be false. As much as Paul is twisted at least he is realistic about his failings.

The main storyline was the best part, the meandering subplots are not as well handled. Solomon is a fine enough character, a sleazy cokehead who almost, but not quite shines. Then you have the character of Amy whose storyline sees her beginning to question if she has made the right decision in life by quitting the sport she loved. The message felt tonally off, all the bad characters throughout Powerbomb were telling Matt and Amy that wrestling is what matters, and that fame and fortune are more important than anything. That then kinda becomes the conclusion that Matt and Amy come to by the films conclusion so their journeys felt a bit pointless. There was never much sense of peril for the characters here which led to the tension in scenes being low, especially with Matt and Paul, there was never much actual threat. I did enjoy the narration that Paul provides, some of what he said really did make sense. I especially liked the way he said that rather than seeing wrestling as being fake you should rather see it as people who are fighting against the fates, a novel spin on things.

There was something a little off about Powerbomb, the strange pacing, the odd mix of disparate subplots, and messages. The horror was slight, and the story was played a little too safe and sweet, but there were highlights here also, in particular with the character of Paul, a character who deservedly got a lot of the screen time (some great set design for his house also). Powerbomb released on 14th April on DVD and Digital thanks to Indican Pictures.