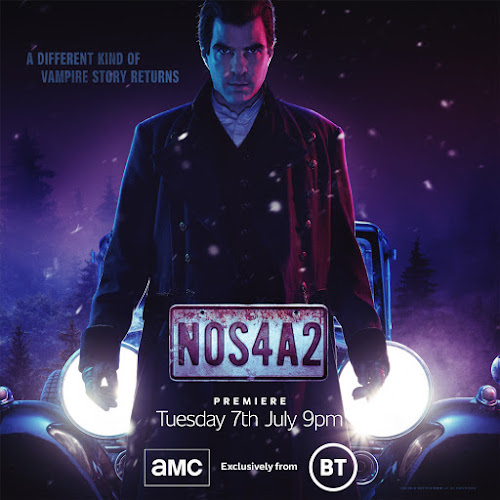 Until I covered news of the upcoming second season of NOS4A2 I have to admit I had never heard of it. I figured from the title it would be something about vampires, but that is only half right, it is something a little bit different. The show is based on the 2013 book of the same name by Joe Hill (Stephen King's son). Having only read a plot summary of the first season on Wikipedia I went into this new season pretty much blind, and while some of the particulars were a little confusing I quickly picked up where all the characters were now at. Currently I have only seen the first four episodes and so rather than be a full review this will be my thoughts on those. Unavoidable spoilers for that first season will follow.


Season 2 picks up eight years after the events of the first season, in which the supernaturally gifted Vic (Ashleigh Cummings) managed to finally defeat the child soul eating Charlie Manx (Zachary Quinto). The seemingly immortal Manx has been in a coma ever since his defeat, but with the help of his lackey, serial killer Bing Partidge (Ólafur Darri Ólafsson) Manx has returned, thirsty for revenge. 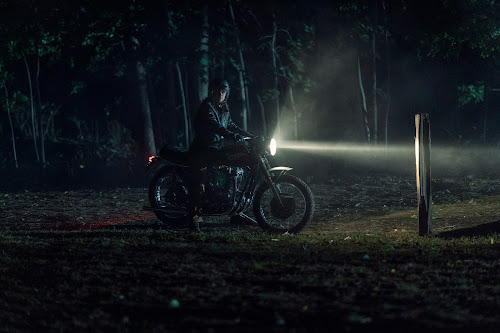 It didn't take too long to get into the swing of things with season 2. It is quickly established that this is very much a story about a battle between two unlikely foes. Vic and Manx both share the screen time almost equally. Picking things up for myself it seems that Vic's power is that she is able to locate any missing person or object by riding through a certain bridge near her home. This bridge acts as a kind of teleporter taking her instantly to whatever thing she is seeking. This is a problem for Manx as he is a man who doesn't want to be found. I found both characters to be really interesting. With Vic, in the intervening years she has suffered PTSD, obsessed with Manx, and an alcoholic she tries to balance the burden of being the only person able to stop the child killer, as well as care for her young son, Wayne. I expected Quinto to be good here as he is a strong actor, and he seems to relish playing the smooth talking Manx. His character's very life force seems to be tied to the supernaturally charged Wraith that he drives around in, and which allows him to feed on the souls of children. He also has somehow created a unique alternate dimension, a place he calls 'Christmasland'. In this place he leaves his victims, children now altered into a more monstrous form, there they are looked after by his daughter, Millie.


The first episode, Bad Mother quickly sets up the focus of the new season. Detailing Manx's return, as well as putting a spotlight on the effects Vic's battles have done to her mental well being. This is followed up by Good Father which does something I really like in shows. What it does is focuses solely on the bad guys, Manx in particular is given plenty of character development. It is third episode, The Night Road when the show really starts to step up a gear, this one provides the motivations for the two leads going forward. The final episode I watched, The Lake House that continues on the unfolding plot while giving some more screen time to characters who up to this point had only had brief scenes. That episode ended on a cliffhanger that made me thirsty for more. 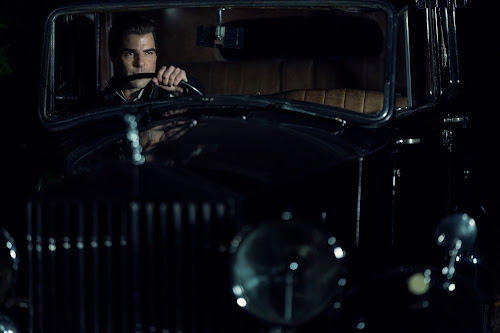 Having not seen the previous season it still wasn't hard to fall into enjoying this one. While I don't really understand just what makes Vic such a threat to Manx, he himself is a fantastic bad guy. This is helped both by Quinto's acting, but also by giving him an interesting underling in the form of Bing. A lot of the acting across the board was good, and my confusion as to aspects of the story didn't dampen my enthusiasm for watching this thanks to that acting. The story here is high stakes and urgent enough yet I found this to be relaxing to watch. It is so far removed from reality, and features characters who are so out there in terms of personality that watching each episode was like a hot knife through butter. The time flowed quickly, with me always eager to see what was next.

NOSFA2 season 2 premiered on Sunday 21st June at 9pm on AMC in the U.S and has it's UK premiere on Tuesday 7th July at 9pm also. Of course I feel I missed out on the story by not seeing the first season, but this one does a good job at bringing you up to speed. I liked the insular feel of two main characters up against each other, with both the actors doing great jobs, and while it is not a stunning show it makes for some really easy and comfortable viewing.
Posted by Daniel Simmonds at 13:51