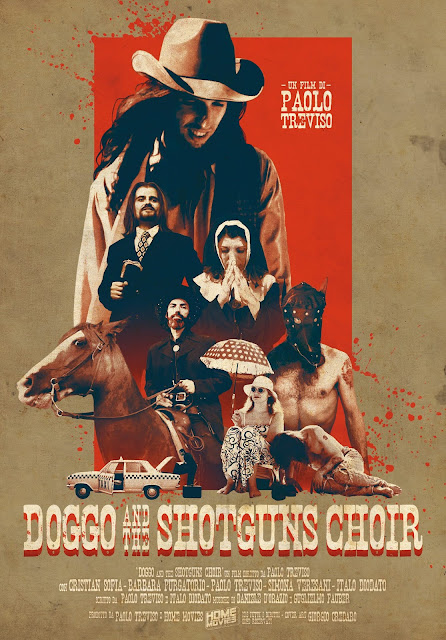 Doggo and the Shotguns Choir is a surreal Italian film that was an abrasive mix-up between two different styles of film. Directed and co-written by Paolo Treviso (Crappy Toilet) this was a hard film to follow, though admittedly mainly due to the fact the screener I watched for review featured no English subtitles. I had to try and piece together the intent from the acting, and what was shown on screen. I have seen non subtitled Turkish horrors before (Baskin), and non subtitled Spanish horrors before (Omnivores), but this was my first Italian one. The plot summary is pieced together from what I gathered was going on.

There are two different stories playing out over Doggo and the Shotguns Choir, initially these seem very unrelated but as both the plots play out they begin to show certain similarities in the themes present. In modern day, and shot in black and white, a freak show attraction known as 'Doggo' escapes his cruel captors and heads to the nearby city where he becomes befriended by a blind woman seeking companionship. Elsewhere, and in colour, seemingly in Wild West times, a lone cowboy goes on a bloody path of vengeance to get revenge for the woman he loved. 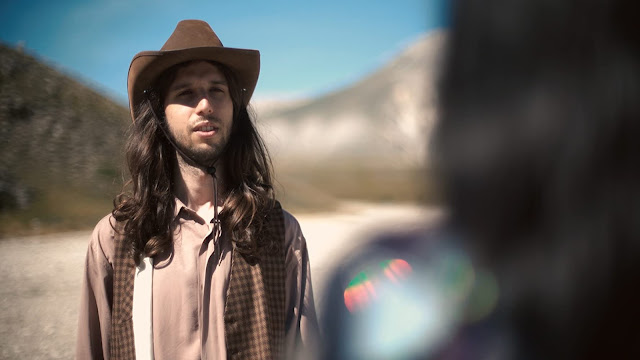 This was a movie of two halves, with the two very distinct stories playing out over the top of each other. If this had purely been the Western story I would have loved this I feel. This part of the movie gave me real nostalgia for the classics, and most keenly a yearning to go back and watch El Mariachi. That may not be set in olden times like this part of the film seemed to be, yet both shared a similar feel in how the story basically plays out. Much of this story features the lone gunman walking through a gully, encountering various people who I imagine were hallucinations. There was a light art house feel that could be seen through characters whose clothing changes between shots. My favourite parts of this were the gun duels, all the classic Western tropes like close ups of characters eyes, and their twitching hands as they go for their guns. In particular the finale here was excellent, taking place by a sunflower field, and featuring an element that was very unexpected (and which I loved). The camera work here was lovely to see.

The other part of the film I didn't enjoy as much, perhaps because there was a lot more dialogue, but also because I found the story being told to be a lot more weird. Doggo is a man who acts like a dog, walking around hunched over and led everywhere by a chain. Flashbacks reveal the abuse he suffered to change him into this, but I could never work out if people thought he actually was a dog or not. Surreal elements such as dog catchers capturing him and taking him to a dog pound for instance suggested he was seen as an animal. A lot of this part featured him and his blind owner who shared many scenes together in a kind of gentle love story. The very best part of this one was the films introduction with the charismatic sideshow man introducing each of the 'freaks' at his show, loved how this part was filmed. 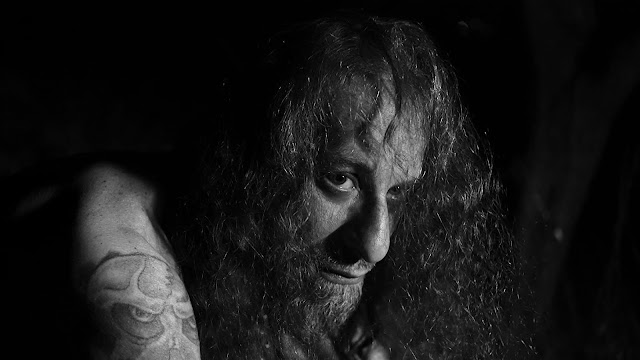 The special effects are minimal, I think this was on purpose, possibly to do with budget constraints, though I feel maybe this was a stylistic decision. Often, such as with gunshots and other injuries blood shows up later on rather than when the injury would first show. The films soundtrack I did enjoy, the manic carnival music that introduces the film was perfect, but it was the Western side of the movie where I adored the music.

Sure, having subtitles would have been nice, but even without those I felt I got a good idea of what the film was about. If this had purely been the Western side I think I would have enjoyed this a lot more. The more abstract black and white story line I didn't find as involving. It isn't an exaggeration to say there isn't anything quite like this unified whole out there, and so if you are after something different then check it out. Doggo and the Shotguns Choir is due out on DVD in all regions thanks to Bayview Films, and the release will include subtitles. For more information check here.

Posted by Daniel Simmonds at 12:01