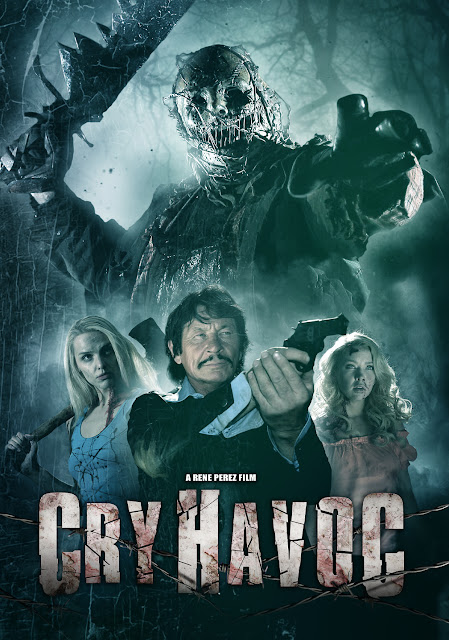 Cry Havoc is the latest horror from writer/director Rene Perez and appears to be a follow up from his Playing with Dolls slasher trilogy, which included, Playing with Dolls, Playing with Dolls: Bloodlust, and Playing with Dolls: Havoc. I'm not sure if it is a continuation of the story told there, or if it is a quasi-sequel, but at the very least it follows the continuing escapades of the hulking brute known as Havoc.
Emily Sweet (The Final Level: Escaping Rancala) stars as a reporter who has managed to secure an exclusive interview with a wanted fugitive. The man, known only by his moniker 'The Voyeur' (Richard Tyson - Black Hawk Down), is on the F.B.I's most wanted list. This is due to his passion being to make snuff films, films that star a cold blooded killer he has dubbed 'Havoc'. In order to conduct the interview the reporter is taken to a secure location, her thirst for the fame her story will bring dulls her to the danger she may be in. Meanwhile, a mysterious man (Robert Bronzi - Once Upon a Time in Deadwood) has followed the woman to the compound, and soon he opens an all out assault on the place... 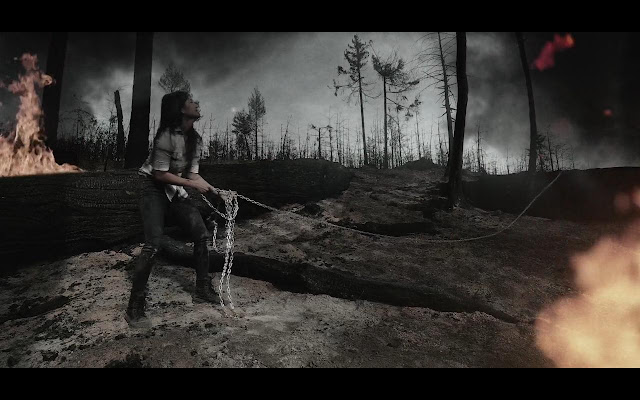 I get the strongest impression watching this that it was part of a much larger collection of films, didn't exactly take a lot to realise this. This felt very much like the middle part of a much larger story. There are plenty of deaths here, but a lot of them are shown in such a way as to suggest they have taken place in the past, I'm not sure for certain but I assume a lot of these death scenes used footage from previous films. Cry Havoc also ends abruptly, there is no conclusion, instead the credits roll when key characters are still in motion. Sure this worked in making me want to find out what happens next, but there isn't really much of an ending. There is a suitably dramatic 'end of movie' fight sequence but it doesn't involve much to it. The story, as it was I did enjoy. I liked how this felt like a cross between Saw and Friday the 13th. It was interesting to have characters trapped in a hellish sort of game, but at the same time being hunted by an eighties style silent slayer.
The voyeur is often shown watching events from camera that are placed around the wood the film mostly takes place in, his best part though was the interview he conducts in the films first act. There are a whole host of characters here, many of which take the form of hired goons that are partaking in a film long gun fight between the man attacking the place. Then there are a bunch of (often) half naked females who are either running away from the titular Havoc, or are chained up and having their intestines pulled out by him. The reporter and the man are the two most detailed characters. The man in particular was amazing. He is a middle aged, straight faced hero who looks like he stepped right out of the 1970's with the clothes he is wearing, and the facial hair he has. I loved how calm and collected he was, often walking purposely in slow motion as bullets whizz around him. The sound design for gunfire was a highlight of Cry Havoc. The noise they make, as well as the visual effects of bullet wounds, and wood chipping off trees was attractive to watch. I loved how this man's side plot interacts with the main story of the reporter. Even when he is not the focus you can still hear the gun fire in the distance, bullets occasionally flying past the reporter in her own story line.
The design of Havoc was pretty cool. He has the frame of a Jason Vorhees, but wears apparel that reminded me a lot more of Leatherface. He himself wears a mask of human skin, with barbed wire wrapped around it for good effect. His weapons of choice are all very rusty and weathered. There are some great kills here, an early highlight being when he pulls the jaw off someone he comes across! Favourite kill was a chainsaw to the particulars, I have a feeling this was a clip from one of the previous films though. The special effects were always fun to see, and there is plenty of blood and gore to round out the satisfactory view.
I'm glad films like Cry Havoc are still being made. The general idea is a very old one, and there are not that many surprises, but regardless I had a good time with this one. I found out some very bad personal news about a close family member just before watching this, this film helped take my mind off of that, so it is hard to be too down on this for being exactly what it looks like it is. Cry Havoc was due for release on 5th May.
SCORE: