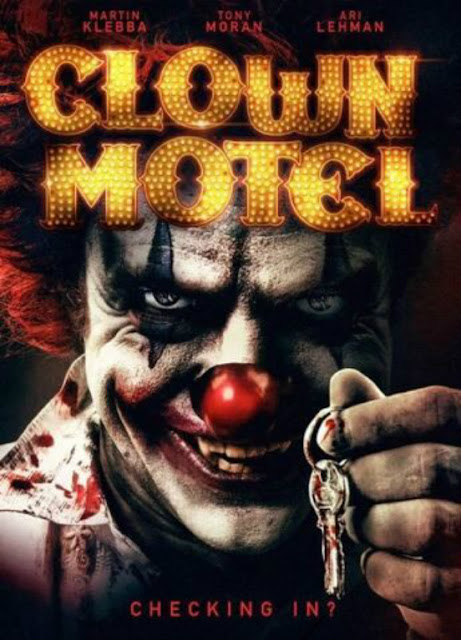 I never understand the fear many people suggest they have of clowns. Obviously they are well represented in horror, everything from the It series to Terrifier and Clown, but on the few occasions I have encountered them in real life I have found them to be funny. Still, in Joseph Kelly's (Bloody Island) Clown Motel: Spirits Arise the clowns are certainly creepy enough. This was based on a short of the same name that Kelly released in 2016, and was partly funded via Kickstarter. There has recently been a new and successful campaign to raise funds for a sequel.

Brooke (Elinor Price - In the Shadow of the Moon) is travelling home through the desert, along with her three best friends, after going to Las Vegas for a Hen's night outing. While driving they notice a run-down looking Clown themed motel, and are unnerved when it keeps appearing on the horizon despite them seemingly being on a straight road. Eventually, assuming they are lost they head to the motel to try and get directions. Meanwhile a trio of friends who make online videos about ghost hunts have also ended up at the motel, thinking it would make for a great new video. With the place seemingly deserted the two groups meet up and decide to spend the night together partying in a room. The next day they wake up to discover a message written on the window in blood, and that is just the start of their nightmare... 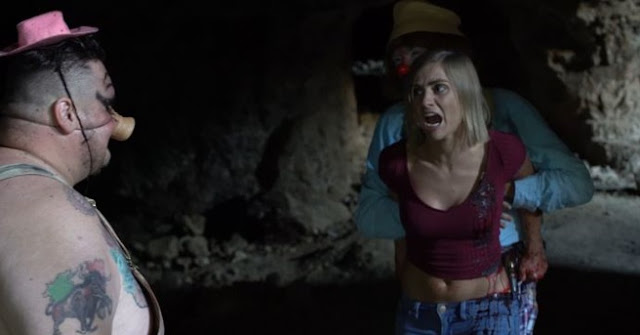 The desolate location brought to mind The Hills Have Eyes remakes, while the motivation for the ghostly clowns felt far more 2001 Maniacs. This was filmed on location at an actual Clown themed motel in Tonopah, a setting that serves as the inspiration for everything that transpires here. With the motel itself being obviously sinister in look, it also happens to have a graveyard right across the street, and a graffiti strewn networks of caves round-out the small checklist of places you most definitely wouldn't want to be. I liked how much world building was set up here, the motel and its ghostly residents have an interesting backstory that almost, but not quite creates a degree of sympathy for all the characters and ghosts. There were supernatural elements about how the protagonists get trapped in a bubble almost, that I would be interested to see explored in the sequel, especially due to how this all ends.

The clowns here may be supernatural in origin (the prologue seeing a commune of clowns in the 1970's getting burned alive in the titular location) but they are far more physical, and can even be killed. There is some nice lore built up for exactly how these creeps came to be haunting the place, this lore also provides the motivation for why they are trying to indiscriminately kill everyone they find. I liked the physicality of these clowns, while the information given for how they manifest handily explains why they are not more in number. Among their number are a few notable faces from classic horror. The head of the group is played by Ari Lehman (the original Jason in Friday the 13th), and you have Tony Moran who of course was the original Michael Myers (Halloween). The clowns all have their own distinct look and personality to them, such as the foul mouthed, crowbar wielding Loco (Martin Klebba - Pirates of the Caribbean: Salazar's Revenge) and the hulking pig faced Hammy (Johnny Perotti). Of course there is a body count, the first few deaths mainly happen off screen but look messed up, later on there are more enjoyable deaths which does include someone getting both their arms ripped off! The special effects are not fantastic, but they are still fun to see, and I did like how the death scenes used practical effects, outside of CG blood spurts. 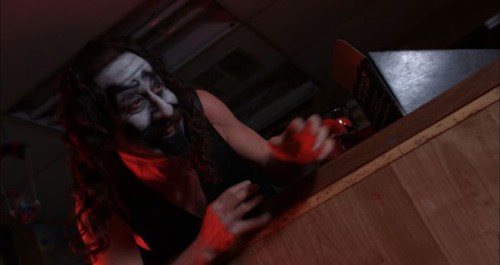 The cast of protagonists were very cliched, but fun character types to follow. Brooke's friends are all walking caricatures, included among them is the slutty one, the nerdy one, and the feisty one, and all act as predictably as you would expect. The male leads were decent as well, I appreciated how innocent their dealings with the girls are. I expected them to be a human menace, but they actually had noble interactions, while providing moments of comic relief. These leads made the best of the sometimes corny script, and least they were perfect for what was required of them. I found some of the clowns lost some of their allure when they talked, as the acting was sometimes not fantastic. Unfortunately the very start of Clown Motel features some of the worst acting in the movie, I was glad when that part was over. Bad acting or good acting, it doesn't really matter in the end as this was designed to be entertaining over anything else, and so you get a film that is very braindead (not saying that is a bad thing).

I expected Clown Motel to be a rough looking horror, but instead this was not a bad indie movie, it looks the part, and the limitations of the budget are disguised well. Sometimes the story gets a little too dumb, and there are some elements of the story that don't hold up that well to scutinity, or make cohesive sense but overall this entertained me enough that the thought of a sequel (currently titled Clown Motel: 2 Death Do Us Part) is one that intrigues me.