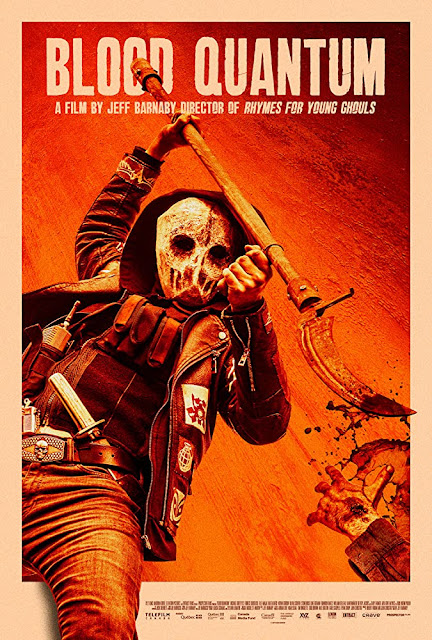 I was shocked to discover the other day that the horror streaming app Shudder was charging me £50 annually to renew my membership. I say shocked because I came to the realisation that over the past two years I had only seen two films on that, so each film was £50 a pop! I love Shudder despite never using it, and so decided that as I had cancelled my Cineworld card (who knows when cinemas are going to return in a form that I am comfortable with!) I would instead watch a Shudder film each Sunday evening, using a term I called 'Shudder Sunday'. It recently came to my attention that phrase was already one in general use! Anyway, I started off with Blood Quantum, a newly released zombie film, written and directed by Jeff Barnaby, which was a no brainer due to zombies being my favourite genre of horror. The idea behind this one sounded like it was going to do something a little bit different, sadly though it was just a little bit different, and was a lot that was very similar.

It is 1981 and a fisherman (Stonehorse Lone Goeman) from the Mi'gmaq community in Canada is shocked to discover the fish he has just gutted are still seemingly alive and kicking. It soon becomes clear something apocalyptic is happening, with infected animals and people turning up everywhere. These zombies (for that is what they are) exist to feast on human flesh. In a twist it is discovered this plague only affects white humans, the native people are somehow immune to the virus. Fast forward six months and a group of survivors live in a fortified compound on Mi'gmaq land. The place is run by former sheriff, Traylor (Michael Greyeyes) and contains within its cargo container walls a mix of native people and white skinned people. Taylor's two sons have very different views on how the world should be run now. Joseph (Forrest Goodluck) spends his days outside the walls searching for survivors to bring back into the camp, his brother, Lysol (Kiowa Gordon) however, harbours an intense hatred for the white folk and sees them as nothing but a potentially dangerous drain on resources. 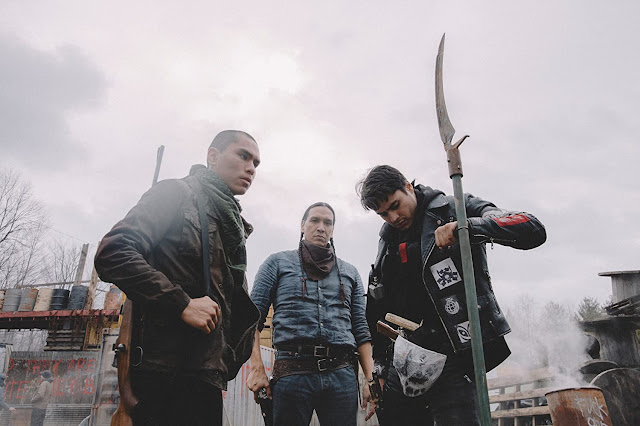 What drew me to this film was the notion of only white people being able to be changed into zombies from a bite. In a way this stands as a contrast to the bloody origins of the country as it is now, the native people trying to do their best to survive, but being under assault from the overwhelming invaders. Where this began to fall down for me was with the character of Lysol, I just did not understand this character at all. He is so full of hatred that he would rather everyone dies than co-exist with other people. He was the driving force in the films story unfolding but I never once could see things from his point of view. I get that he mistrusted white people due to them being able to become the undead, but I never got his desire to try and kill everyone, as if to make some kind of point. Everything around the native people and their history and customs was interesting, but Blood Quantum devolved into a typical zombie film that did not have many surprises.

The first act, taking place at the start of the apocalypse, I was on board with this, I enjoyed that quite a lot. I also enjoyed the films third act in which zombie attacks become a much bigger part of things. I found the whole middle part to be a bit dull, most of this segment takes place within the confines of the base. There wasn't a particular character that I thought stood out, they were all fine, but unexciting usual suspects of protagonists that had surprisingly little character development, and whose character arcs were pretty uneventful. You have Joseph's white girlfriend who is worried their baby might become a zombie, the local doctor (Elle-Máijá Tailfeathers) who is the films strongest female presence and a bunch of others, but no one character really stood out as anything special. 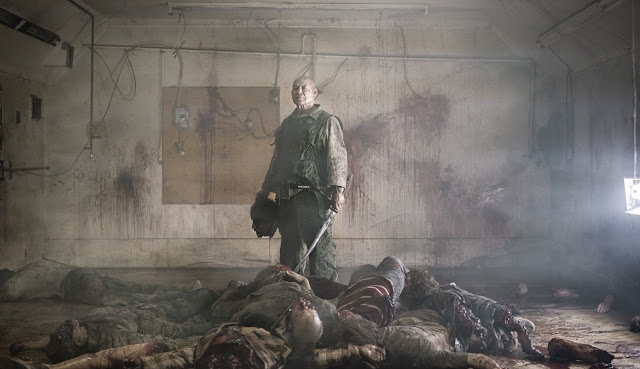 Until the third act the undead don't show up in huge numbers, but they look decent enough. They are of the running variety, and there were plenty of shots of them swarming over people and eating intestines, but I never felt that threatened by them. Even the high action scenes when characters are desperately running or fighting them I just didn't feel the tension, I'm not sure why. The special effects are often satisfying, a chainsaw right through the centre of a ghouls face for instance had me smiling, and limbs get lopped off a plenty thanks to one character armed with a samurai sword. It barely excited me though, and I think that was down to how by the numbers the unfolding of the story all was to me. The one part of this I thought was cool was the 'immune to infection' part. Having characters covered in bite mark scars from previous encounters was a nice idea, and having characters actually being able to be bitten made for some more urgent survival sequences.

I really wanted to love Blood Quantum, and it had some parts of it story wise that I thought were great, especially using the undead to make some social commentary, just like Romero used to do all those years ago. I think with a better developed, and more interesting cast of characters this would have been more watchable, as it was though, despite the unique angle, this was too similar to plenty other zombie films during the high stakes moments, which lead to a degree of over familiarity. Blood Quantum is currently streaming on Shudder.

Posted by Daniel Simmonds at 11:28