Beyond the Shadows is a found footage style faux documentary that follows a bunch of ghost hunters filming a live show. It was written and directed by David James Gustafson (High Note). The coolest thing about it is that it is free to watch on YouTube. There are moments of greatness to be found here, and some fantastic casting choices, but the slow pace of this meant I was ready for the credits long before they rolled around.


Drexler Faust (Tyler Roy Roberts - Z Nation) and his friends, that include among them Sam Olive (High Note) as Jonathon Coxman, are the stars of a hit online ghost hunting show. A lot of their popularity is down to their slickly produced and edited videos, and they are not without their detractors, their main one being Dr. Calvin Harding (Cameron Lee Price - Vengeance), who sees them as fraudsters. It is soon established the team do indeed fake their videos, but they jump at the chance to do a live video of their latest haunt, in which Calvin and his team, as well as some super fans are going to be in attendance. Drexler feels that it will be great publicity for them if they can manage to convince the Dr. that what they do is legitimate, while also relishing the challenge of faking things live, rather than by editing afterwards. The location chosen is an old lodge, said to contain the spirits of Native Americans slaughtered in the area in the 1800's. Unluckily for all involved though it turns out there may be no need to fake the footage, as the place seems to be actually haunted... 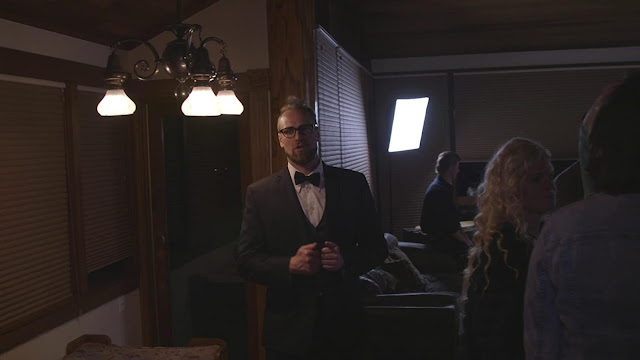 I felt like I was waiting the majority of Beyond the Shadows for things to get moving. The horror part of this horror comedy began around fifty minutes into the hour and a half run time, but even from this point events are slow to occur. Finally, with ten minutes left the film finally got to a point where I was really enjoying it. There was a fantastically edited sequence of events that was set to this great and haunting piano music. Everything about that segment was wonderful. Prior to this a lot of set up. Initially we follow Drexler and his friends at a previous ghost haunt. This part was good at establishing the characters, I found both Roberts and Olive to be strong and easy on the eye protagonists. After this we are slowly introduced to the rest of the cast that featured some real gems among them.

Ty Boice (High Note) plays Monty, the manager of the lodge the characters are staying at. He had a real screen presence to him, and at certain times was the best character. However many of the comedic moments feature him in bizarre compromising situations, such as him dry humping a mattress, or shaving his privates, these scenes really added nothing at all to the film as well as not being funny. It is the more serious moments in which this obviously good actor got to shine, sometimes the weird persona he brought to the camera really did work in an involving way. Another highlight in terms of the actors was Gabrielle Malate as the spirit medium Phantasma. Her character worked as she wasn't given anything silly to do, and she carried an air of mystery about her. Sadly she was sparsely used, but the couple of scenes she appeared in were some of the most captivating ones to be found here. There is a late scene in which her and Monty have a conversation by a bathtub that I found so special that I had to skip back to watch it again immediately afterwards.


Beyond the Shadows would have been a much better film if a lot of the comedic fluff had been taken out, I didn't find any of the comedy here to appeal personally, and it distracts more than anything. There is a recurring gag of people hearing unexplained noises, then investigating to find two characters making out. It didn't work for me the first time, so then to go back and have the exact same pay off just felt like it should have been cut out the movie. Due to the humour here I didn't really realise when the horror had started. There is a body count, but the first death featured very obvious CG blood and so going forth no matter which characters died I just assumed it was all meant to be fake and that no one was actually dying, that there would be an epilogue to reveal it had in fact just been another slickly edited video of the fake ghost hunters. It is likely a matter of personal preference but with so much of the comedy not hitting for me I found it to be a real distraction from the story going on here. There were enough good ideas that this could have been played seriously, moments such as a character explaining just how horrific the genocide of the Native American people really was feel at odds with the cartoon like personalities of some of the characters.

In terms of the actual filmmaking and acting there is not much to complain about. This has a good soundtrack, some really interesting characters, and a few nice moments. There was a feeling that there were not enough ideas going on to fill the feature length run time, for me I found myself clock watching, waiting for things to happen. While I didn't find this the most exciting film as a whole, there are individual scenes, characters, and moments here that really were stunning, they were just hidden among a lot of stuff I didn't enjoy so much. Still for you the humour may work, and if it does I'm sure you would get a lot more enjoyment out of this. The opener to Beyond the Shadows can be viewed on YouTube here.