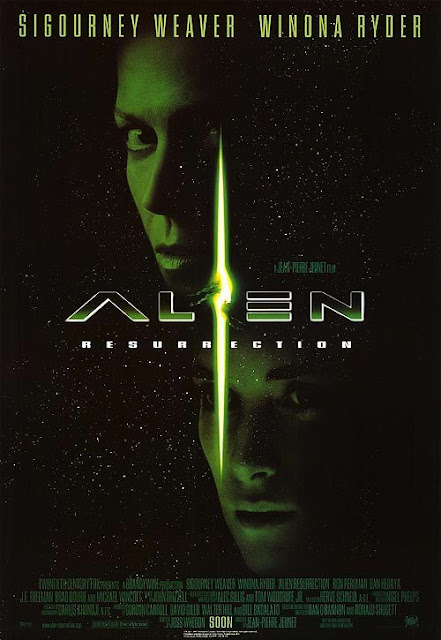 Alien: Resurrection is the last of the proper Alien films and is one I hadn't seen for decades. Technically I still haven't seen it for decades as for this review I watched the '2003 Special Edition' which includes a new opening and closing scene. Apparently out of all the special editions for the Alien films this is the only one where story elements are not changed up. This adds around four minutes of additional footage, as well as removes some parts that were originally included. It opens with an intro from director Jean-Pierre Jeunet (Amélie, The City of Lost Children) who explains somewhat grudgingly that the new version of the film isn't the directors cut, he states the original theatrical version was his directors cut as it had everything he wanted in it.

This takes place 200 years after the end of Alien3, in which Ripley (Sigourney Weaver - Alien series, Ghostbusters) killed herself in order to stop the evil Weyland Yutani corporation from getting their hands on the alien growing inside her. That company has long ceased to exist, however a shadowy branch of the military has managed to clone both her, and the alien inside her on a secret military space vessel. They plan to breed an army of aliens to use as weapons but are unaware of how dangerous this plan is. A group of space bandits, that include among them Call (Winona Ryder - Stranger Things) and Johner (Ron Perlman - Hellboy) arrive on the vessel not long before the resurrected and fully grown alien Queen escapes from confinement, along with a whole bunch of new, more intelligent aliens. Now these bandits must team up with a couple of soldiers, as well as the Ripley clone (that has alien type abilities) in order to escape the doomed vessel. 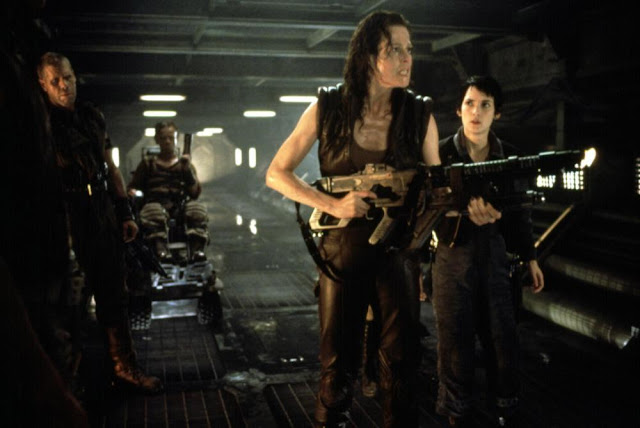 In my mind Alien: Resurrection was not a great film, I recalled enjoying it but felt that at the time too much time had passed between this and the third film. In reality it wasn't so long. Sure it was five years, but then the gap between Alien and Aliens was seven years, and the gap between that and Alien3 was again another seven years. Getting past the slightly dodgy way Ripley is once again alive and kicking (apparently she was cloned by a blood sample that was retrieved from the prison complex in Alien3) this was a fun film that tries to be an amalgamation of past ones. The horror and suspense is almost non existent, so this has more in common with Aliens, though a much more low key adventure. The aliens are not in huge abundance and usually only appear in ones and twos, or to kill or attack characters from off camera. Along the way you get both facehuggers, the typical aliens, the alien Queen, as well as a new human/alien hybrid who becomes the third acts monster antagonist.

I was impressed with the special effects at times, and at other times they did not hold up so well. I thought the look of the hybrid monster in particular was great, and there were some really fun kills here, my favourite being an infected character weaponizing his chest bursting moment! There are plenty of shots of the iconic extendible mandibles being used to puncture through characters body parts, these always looked great. CG use here is abysmal though, and that includes the very first shot of the movie. This moment was left out of the original film due to budget, and was finished for the special edition. However, the opening shot, starts on a close-up shot of an alien fly, this insect was all CG and looked so incredibly basic and unfinished that I honestly assumed it was a graphic for a title card of a production company. I was amazed when the camera pulls back and reveals this awful looking insect itself to be a part of the actual movie. Amazingly bad CG there! The additional ending however I did enjoy. Originally the survivors make it to Earth, this new ending actually reveals what Earth looks like. Again not the best CG, but it works better here when it is a static image being used. 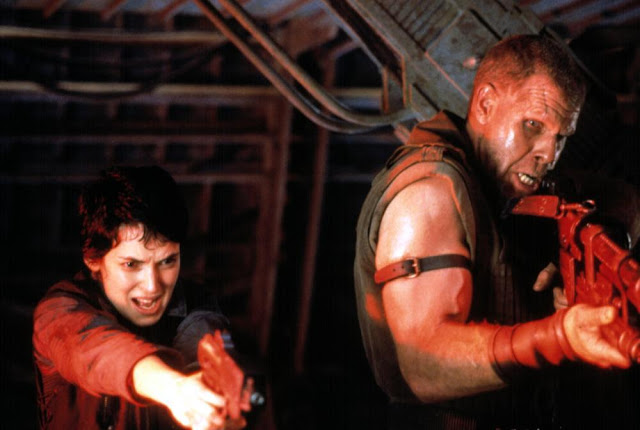 There are a lot of iconic actors here, some of which I had forgotten were even in this. Brad Dourif for example (the legendary voice of Chucky from the Child's Play series) puts in a spirited performance as the head scientist. Elsewhere you have Dan Hedaya (Mulholland Drive, The Usual Suspects) who is just fantastic as the captain of the ship, he has the most amazing facial expressions, and Michael Wincott (The Crow, Robin Hood: Prince of Thieves) who is criminally underused, his starring role is quickly revealed to be a fake-out. Weaver is great in her role as she always is, here, being a clone she gets to act like the heroine she always was, but with the vulnerabilities removed. This was an interesting decision, turning her into a Terminator type good guy, but it also meant the peril for her character in particular was very low.

I was prepared to discover Alien: Resurrection was no longer any good at all as a movie, but it turns out it is a really enjoyable entry in the series. With each subsequent entry the films lost more and more of the magic, but even diluted as it was this fourth entry was a fun and stupid ride with effects that mostly hold up really well today, well outside of the terrible CG.

Posted by Daniel Simmonds at 10:49

100% agree. Douriff, Raymond Cruz, Hedaya, Gary Dourdon, Michael Wincott, and Leland Orser I forgot were in the movie completely. I only remembered Weaver, Ryder, and Perlman from my original viewing on VHS in 1998.

Weaver rocks in this. She's having fun, and so do we. Yes, I agree, she never seemed to be in peril. That was pretty clear when she was able to remove a facehugger from herself purely on her enhanced strength, but after the close of Alien, I never worried about her survival in Aliens or Alien 3. Her death was a twist, but even then, it wasn't because she was in peril from the alien itself, it was to kill the species before her chest exploded.

From what I recalled from watching it in '98, I was more expecting her to make some sort of Terminator-like suicide move, I.E. T2. She'd make sure everyone was out, then do something to kill herself again while also killing the alien threat. She'd be bulletproof until the finale, then take a bullet to save the remaining humans. I was actually glad that she beat the menace and then decided to keep right on going.

Rewatching this in 2021, the thing that most surprised me is that seeing Weaver's great take on this new...Improved? Version of Ripley, that when the credits rolled, I was actually slightly disappointed to know that we never got another theatrical outing or two with the character. I'd have paid money to see an Alien 5 and 6 with Ripley 8.

More films in a similar vein would have been cool, unlike the Terminator and Predator franchises the core four Alien films were all good in their own ways despite the flack the later ones received.