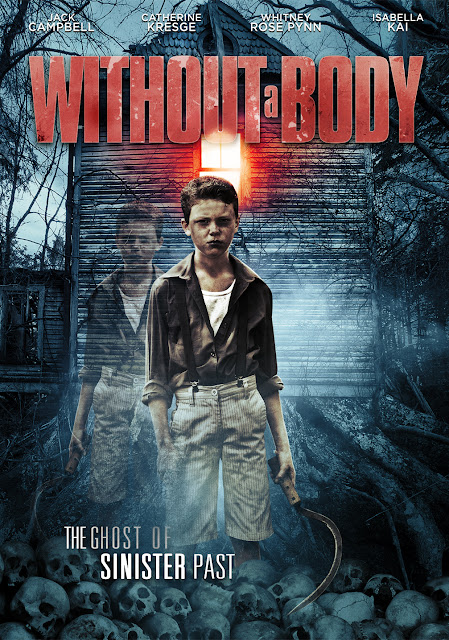 Without a Body (also known as Asmatous) is a supernatural horror that was directed by Harvey Lowry (A Deadly Dance). The general idea behind this one brought to mind both Sinister and The Conjuring, but in an indie package. There were some good ideas here, but there was also a whole load of them and the amount of things going on led to some of these ideas getting diluted.

Alex (Jack Campbell - Gabriel) has recently moved into a run down property along with his two daughters, Rachel (Whitney Rose Pynn - Aquarius TV series) and Sophie (Isabella Kai - Pretty Little Liars TV series). Alex is a published author whose topic of work is debunking alleged haunted places, in fact the very reason he has moved into a new home is to be at the location where a murder suicide took place. The property is said to be haunted and so he wants his next book to be about showing why it isn't. The only problem, as his two daughters quickly realise, is that the house is of course very haunted, both by twin ghostly boys, and a terrifying old lady (Rena Owen - Sirens TV series) who seem to want him and his family to join them.

I've gotten to the stage today where I feel I could watch a movie about a static block of cheese and still find it a solid piece of escapism. Without a Body is not a fantastic movie, I have seen its ideas in plenty of places before, and I felt like there wasn't enough screen time given to really explore the things it brings up, but still, it was a distraction. The general set up may be familiar to Sinister but there are no real scares to be had here. The fact that Alex is there to write a book kind of fades into the background a bit, the first two thirds of the film revolve around him and his interactions with his daughters. A tragedy killed his wife in the recent past and so the older of the two sisters, Rachel has taken it upon herself to become a motherly figure to her younger sister. I felt that far too much time was dedicated to this part of the film as when things get crazy in the last half hour there is too much going on to satisfyingly bring the film to an effective conclusion. By the end there is plot twist after plot twist, each coming so hot on the heels of the other that there isn't enough time to properly integrate them. It became dizzying and almost farcical with the speed characters are having to react to changing situations.

Without a Body features three main characters that each display a different mindset. Alex refuses to acknowledge there is anything supernatural going on, he is a complete skeptic. Rachel is in the middle, she agrees with her father in theory but she begins to doubt him after what starts happening. Then you have Sophie who is happily going off and making friends with the resident ghosts, too young to understand the danger she is in. Rounding out the small living cast you have Catherine Kresge (R.I.P.D) as friendly neighbour Hannah, and Kevin Sorbo (Hercules TV show and movies) as psychic Malcolm. The problem with Malcolm is that the character is an essential component of the film, yet he only appears with twenty minutes of film time left to go, his sudden appearance just adds to the manic and out of control progression of the story by that point. 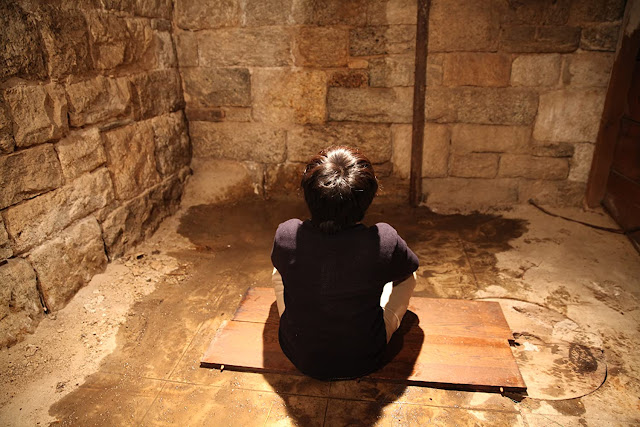 The highlight of Without a Body comes in the makeup and design of the ghosts. While they have a very physical presence (able to attack characters using their bodies rather than using ghostly powers) they look suitably creepy, especially with the old woman ghost. There are some nice moments, such as when a phone line repair man is in the basement, but the payoff is usually never anything huge. The part involving a game of 'Blind Man's Bluff' was very effective though, the highlight of the whole film. The majority of scenes involving the ghosts ends in events fizzling out, the ghosts seemingly having no real power to do anything. In general not a lot happens, figures are seen walking in the background of some shots, doors and objects move around on their own, but the threat level didn't feel high, and I didn't feel any tension about the characters being in the house.

This was a film that had ideas going for it that were underdeveloped, and the story occasionally got a little bit too sweet. Some of the twists and turns were unexpected but they were not presented in the best way. Still, this did its job as escapism, to be honest anything that does that in these current times is fine by me. Without a Body is released thanks to Acort International.

Posted by Daniel Simmonds at 05:15