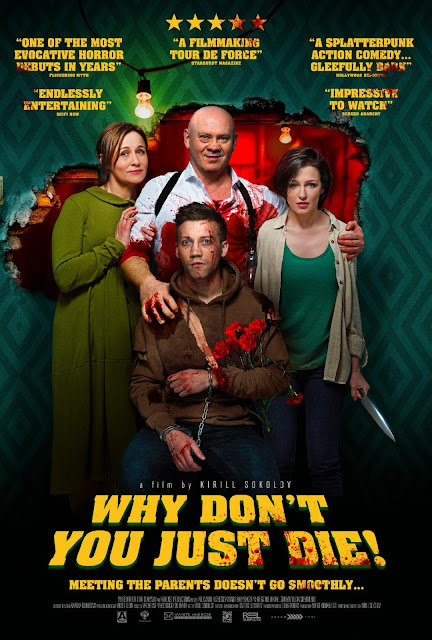 Why Don't You Just Die! (original title Papa, sdokhni) is a darkly comic Russian horror that was written and directed by Kirill Sokolov in his feature length directorial debut. It is also by far the bloodiest film I have seen in a long time, by the films conclusion the small apartment it is based in is drenched in blood on almost every surface, no bad thing! While it is in Russian the subtitles are perfectly fine.

Matvey (Aleksandr Kuznetsov) turns up at the door of detective Andrey Gennadievitch (Vitaliy Khaev) with the intention of murdering him on behalf of his daughter, Olya (Evgeniya Kregzhde). However it is fair to say things don't exactly to plan and soon he finds himself chained up in the bathroom. This is just the first in a series of events that brings mayhem and bloodshed to all involved in an ever increasing chain of double crosses and insanity... 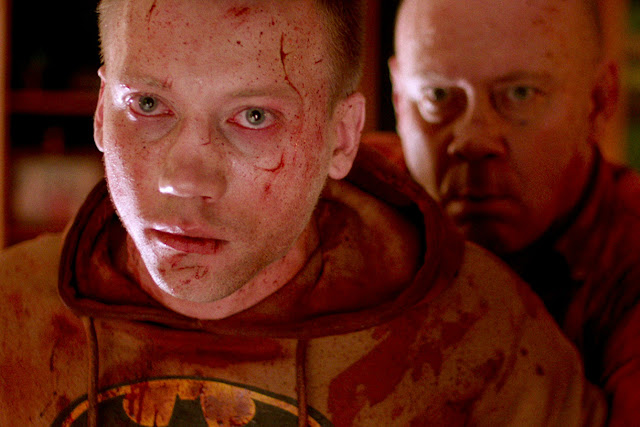 This gets into things straight away with the film opening with Matvey just about to knock on his girlfriend's Dad's door. Motivations and explanations for all that occurs takes place as a series of flashbacks. Eventually we get brought up to speed on the mostly silent protagonists reasons. It was like the unlocking of a big puzzle, with each flashback more context is given, which impacts on future scenes. Sometimes the story plays out in an unreliable way, an early example being Matvey managing to pick the lock on his handcuffs and fleeing the flat. Then more information is provided and we go back in time to show Matvey in fact unable to pick the lock. Each character in the film is there for a specific reason and acts as part of the overall puzzle. Each subsequent visitor to the apartment adds on to the very farcical nature of what is unfolding.

The humour is jet black (or I guess dark red), this isn't a film where you get amusing witty dialogue often. There are a few choice moments, such as when Andrey's detective partner comments that what Andrey has done to Matvey could make him seem a bit pathological, and the running gag that everyone who knows Andrey suspects a rumour put out about him could be true (both of these are made funny by the way the characters are acting, doesn't translate well to text it turns out!). Mainly the comedy elements are usually quite visual, almost slapstick levels of characters slipping around in blood, and ridiculous fight scenes that include in them such parts as a character getting their backside stuck in a wall, and a thrown TV that smashes into a characters face in slow motion. There is a lot of blood here, and some parts became gruesomely violent, a power drill to the leg for instance. With how the movie starts with a long fight sequence I thought it was possible that the entire film was just going to be a fight scene which would have been something. Instead the title mainly refers to the one character, but nearly all the characters seem to have extra reserves of strength that allows them to do things they really shouldn't be able to after taking fatal wounds.

With all that transpires it felt like a Shakespearean tragedy, but one that comes off as so ridiculous that it becomes delightful. Being set in a brightly lit apartment decked with lime green wallpaper was an inspired choice, this contrast between the location and the events always felt so at odds with each other. There are also strong elements of the films of Tarantino to be found here, it shares the black comedy to be found there, and even the structure of going back and forwards between the present and the past. This was filmed in a very stylish way, the camera rarely stays still for too long, and a lot of neat tricks are used to really brings everything to life. Camera angle changes to the blast of a shotgun, a close up x-ray view of a bone snapping, and tight up close shots of characters often gormless expressions are all set to a fantastic soundtrack of music and songs that always create an off kilter feel. The main morale of Why Don't You Just Die! seems to be about the effects corruption has on the family unit, and on society as a whole, here it shows how this evil force can literally tear families apart. While Matvey is hardly an innocent bystander he becomes almost the 'every man' ideal, his silence turns him into a silent observer, much like the viewer is. He may have started off the chain of events but his role is tertiary to what happens.

Why Don't You Just Die! gets things right on a number of levels. The camera work, editing, sound design, set design, makeup and special effects, these all look fantastic. The blood is over the top but it works perfectly, while the collection of flawed characters make for an always interesting and often amusingly chaotic story. Initially this was due to have a limited theatrical release in the US and UK, but COVID-19 saw to that. Currently Why Don't You Just Die! is due for digital and Blu-ray release on April 20th thanks to Arrow Video. It will also be on the Arrow Video channel on 4th May.