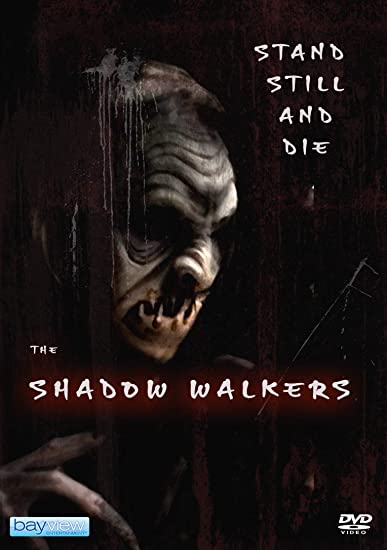 The Shadow Walkers is a very B movie feeling horror that is exactly what it at first appears to be. Directed by Mark Steven Grove (The Black Hole) this tells a tale that is traditional in every sense of the word. It is a film of no thrills and no surprises, bad acting and basic storytelling, yet it is because of these that it became something hard to be too down on. It knows it is a shoddily made genre film and never tries to pretend it's not.

A group of scientists and soldiers awaken in an underground research facility with little memory of how they got there. They soon discover the place is full of genetically altered mutants and so seek a way to escape. Unknown to them, they are being watched and studied by an ominous military force who seem to want to use their struggle as combat data to perfect the mutants. 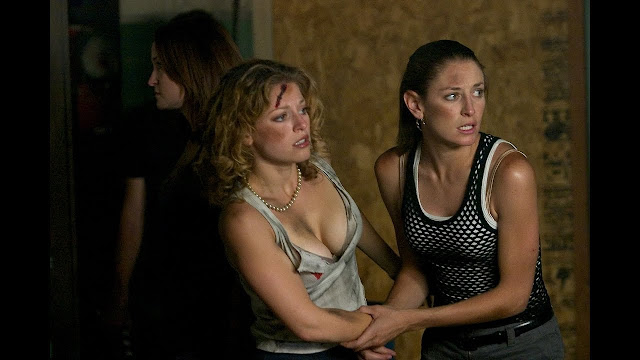 The general outline of the story made brought up similarities between this and Resident Evil, but the low budget of this one means a more fitting comparison is to the sci-fi horror Xtro 2. Locations are dimly lit, effects are minimal and characters seem to delight in dramatic over the top reactions to everything. Right from the start you can tell this isn't going to be anything cerebral with a bunch of shocked scientists getting butchered by a unit of soldiers. There is nothing wrong with brain dead movies, they can be decent escapism, but The Shadow Walkers falls into the trap of also managing to be quite dull at times. The mutant creatures reminded me a lot of zombies, they even have the ability to infect people they bite. Much of the films subplot revolves around one of the survivors who has been bitten and is slowly transforming. This aspect I quite liked, there are a bunch of flashbacks to show the jobs and roles the various characters had before their amnesia, with the insight that the characters were not the most noble of people.

The look of the mutants is quite basic, aside from long claws on their hands the only sign they are not normal is average looking prosthetics on their faces. The faces are pale green with huge fangs in their mouths, but the design is also very static with not much ability for the monsters to emote. Gunfire is wimpy, and some of the props, such as a severed foot looked poor. However there are plenty of moments of violence that do look decent enough. I especially liked one part where a mutant rips the spine out of a character! With tonnes of these creatures I would have gotten more enjoyment, but there are only one or two encountered at any one time, most meetings devolve into a character fighting a mutant using hand to hand combat. There are some nice kicks and throws but the fight scenes blur into one a bit due to the amount of times they happen.

Characters are an assortment of bland people, I struggled to tell any of the female ones apart, but the male side has some more interesting stereotypes. I thought the evil scientist Clay (Clay Adams - Teenage Mutant Ninja Turtles TV series) was spirited in his role, the goatee was a nice touch as is the universal sign of a bad guy. The main hero guy (I never caught his name) was also perfectly fine, he looked the part at least. I found the plot about the military secretly monitoring the events to be a cool touch, a bit underused but it created a break from the murky goings on at the underground base. It almost brought to mind the military segments from the great The Return of the Living Dead.

The Shadow Walkers is unapologetic in the way it has been created, and while it works as escapism it could have done with standing out a bit more from the crowd. As it was the biggest thoughts I had while watching it was just how familiar it felt, and how it really had no surprises to the story it was telling. All that said though, going into this with the right expectations you may well be entertained, it is the perfect example of a low budget B movie horror. The Shadow Walkers has been released on DVD thanks to BayView Entertainment.