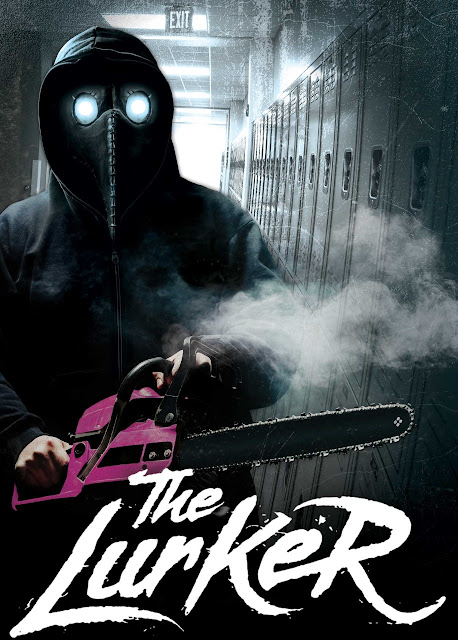 The Lurker is a modern day slasher that takes its inspirations from the classics of the eighties, this much can be seen at a glance at the high school this takes place in being called 'Crystal Lake High'. It was directed by Eric Liberacki (Anti-body) and stars Scout Taylor-Compton in a role that felt really unsuited to her. I loved her in Rob Zombie's Halloween reboot series but here it is a bit much to be expected to believe she is a high school student when she obviously looks a heck of a lot closer to thirty (as of 2019 when this movie came out she would have been turning thirty). Now I'm not age shaming her or anything, thirty is not an old age, however it is an old age to be playing an underage student, it lent new meaning to the title of The Lurker.

It is the last year of high school and Taylor (Taylor-Compton) and her drama friends are putting on the final show of Romeo and Juliet. There is a rumour going around school about her and despite her best attempts it just seems to be spreading. That turns out to be the least of her worries though as there is also a crazed psycho going around school butchering students and teachers alike, and who it seems has a special interest in Taylor...

It is a shame that the very best part of The Lurker is the first five minutes. We get a nice early kill; death by umbrella, and then a suitably eighties intro credit sequence replete with synth music. Problems soon turn up when a heck of a lot of the students look really quite old for high schoolers. When students look a similar age to some of the teachers you know there's a problem. One of my biggest issues was not with that though, it was with how completely unlikeable the vast majority of the characters are. Taylor appears to hate her friends, her friends appear to hate her, her teachers seem to hate her, in fact the only character outside of her mum (Domenica Cameron-Scorsese - Cape Fear) is the obvious red herring that is the janitor (Eddie Huchro). It makes for an unpleasant experience with there being no one to root for, in fact the majority of the characters I was more than happy to see killed off, Taylor included, they are all so mean spirited and horrible. This all plays to an incident in the past that is constantly being hinted at via brief confusing flashback sequences. Rather than be intriguing as to what happened it was instead made frustrating as this event served as the key motivation for nearly all the characters, and so by this not being shown to the viewer everyone's meanness was hard to understand.

One area where The Lurker isn't so bad is the amount of kills on show here. It follows the tried and tested way of no two victims being killed off the same way. Death by cinder block, drowning, someone even gets sawn up by a chainsaw! The kills often lack a sense of urgency with how they are filmed, and occasionally become unintentionally funny. One poor character is instantly killed the second they make their initial appearance into the film, I'm not talking about the prologue, this is a good two thirds of the way in. They walk on screen and about half a minute later they are dead, a look of confusion that felt more like they hadn't even been aware they were in a slasher flick than anything else. The killer is dressed all in black and wearing a plague doctor style mask. This look was fine, the mask fits in due to the Shakespeare play being put on, however I guessed right away who the killer was, and I was spot on. There is more to it than initially appears, to be fair that was not something I expected but I did miss the usual guessing that goes on in teen slashers, as it was so obvious as to seem totally unlikely anyone else could be the suspect.

The pacing and the acting were a garbled mess, there is no sense of threat or urgency and characters seemed to teleport around from location to location, one second in the woods, the next at a party at a students house (that featured the great scene stealing actor Rikki Lee Travolta, by far the best part of The Lurker), and then inexplicably in the school. For a bunch of teens getting killed off one by one none of them seemed the least bit afraid of what was happening. This lack of urgency really hampered the effectiveness of the films third act, characters are not behaving much differently to when they were back drinking and smoking pot. This wasn't helped by the script which was not the best in the world. I can see it was paying homage to eighties slashers (at one point a character says the iconic line "I'll be right back") but it just added to the feeling there wasn't something quite right about the direction this horror took.

I feel with more relatable characters and less confusing camerawork, as well as better pacing this could have been improved drastically. As it was this wasn't too enjoyable outside of the inventive range of kills and the pretty decent soundtrack, and at least it's only around an hour ten minutes long. The Lurker came to Digital platforms and DVD on April 14th thanks to Indican Pictures.