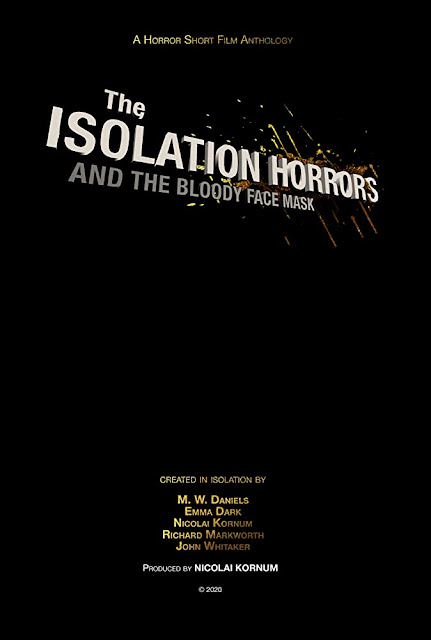 The Isolation Horrors is a very topical anthology, so much so that I bumped it up my list of films to watch so that a review could go out as soon as possible. It is low in budget but for the best of reasons. This short horror anthology was produced in March and April of this year. Each of the five shorts here were made by five different filmmakers from their own homes, an idea that came from multi-award winning filmmaker Nicolai Kornum (Undertaker, Umbilichord). The idea was that it could entertain horror fans during the lockdown so many of us are facing. This anthology becomes all the more impressive when you consider each one was filmed using phones, and with limited resources. I also liked that each of the five directors star in their shorts, playing a fictionalised version of themselves.

The wraparound story is The Bloody Face Mask, written and directed by Kornum. While outside one dark night Kornum discovers a bloody face mask in the street. Concerned that it might have belonged to one of his neighbours he decides to video call them one by one. This forms the pathways into the individual shorts. Initially there didn't seem much to this wraparound story, it seemed merely to introduce the other directors rather than tell its own story. However this one got better as it went along, leading to an excellent finish, and becoming my second favourite of the films here.

Goryõ is the first proper short and was written and directed by Emma Dark (Seize the Night). Emma receives a message on her laptop purporting to show the death of a Japanese idol, along with a warning not to click on the link. She does so anyway and soon begins to regret her decision. This was the shortest of the films here, the idea was one I had seen used plenty of times before, though with a topical spin to it.

Next up was Across The Landing which was written and directed by Richard Markworth (Carrigan Wakes). This one takes place as a series of video diaries recorded by Markworth in his isolation. As the days go by he starts to appear more and more paranoid and desperate. This was a simple idea but I loved the format of various days passing, especially with the English flag in the background that gets more and more decrepit in appearance as time goes on, a visual indicator of the fictional Markworth's deteriorating condition. It was just the other day that a delivery driver at my work told me a story he had heard that played out almost identically to what happens here, giving this one a greater feeling of realism despite the comically exaggerated persona of the protagonist.

The penultimate short was John Whitaker's Anomalous (as composer 1i2c his music has been woven essentially into such trippy horrors as Zombie and Bed of Nails). Shot in black and white this follows Whitaker after he has returned from shopping with a stockpile of toilet rolls. This comedic horror was my favourite of the shorts, what I loved here was how he managed to make a simple toilet roll become something creepy!

Finally is Ghosting Isolation by M.W Daniels. The time spent alone begins to affect his mental state resulting in some The Shining style hallucinations. I wasn't entirely sure what was going on here but it wasn't bad.

At around 25 minutes long this was a joy to watch, but then I have a lot of time for anthology films. You could say that some of these appear quite basic, but then that is the point, these are filmed and produced in isolation and so the look backs up the authenticity they legitimately have. The editing and visual effects these had was impressive, my score for this reflects my appreciation for the constraints the various directors had. The Isolation Horrors will be available to watch as a YouTube scheduled premiere on Friday 24th April at 9pm GMT at this link.