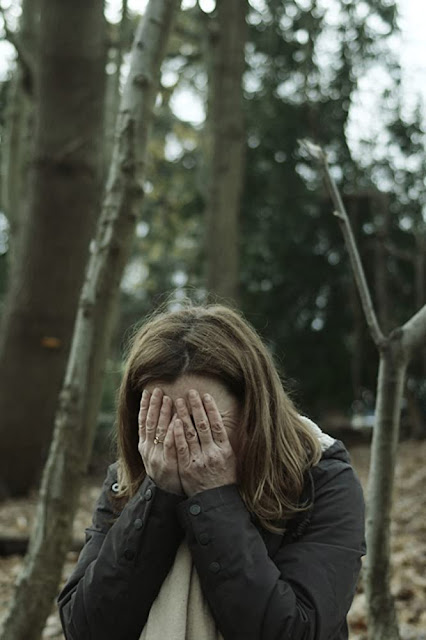 The Erl King is a twelve minute short that was directed and co-written by Callum Windsor. It had a strong folklore vibe to it and so I wasn't too surprised to discover it was inspired by an 18th Century poem Erlkönig by Johann Wolfgang von Goethe, which was about a young boy haunted by a supernatural being known as the Elf King who eventually kills the child.

Lewis Hyman co-stars as Alfie, a young boy whose father recently died in a car accident that occurred when he was trying to steal the boy away from his mother, Julia (Louise Elliker). Alfie is nearly recovered from the physical injuries he suffered, but Julia is struggling to form a connection to him. The boy is convinced he can still see his father (Simon Victor), and his delusions comes to a head during a visit to a fair when he runs off and is found in some nearby woods clutching an old book that he swears the 'Erl King' gave him.

This film shows once again that short films doesn't need to equate to a low budget look. This looks good and has a fantastic score that both felt fairytale like, but was also mournful in its tone. At its heart this is an exploration into grief, mainly with the mother, Julia who despairs at the thought that Alfie seems even closer to his father than ever before. It is suggested the father was not a good man, which makes the child's distance from his mother all the more painful. The whole mythos of this elf like being (also played by Victor) made for the most compelling parts of the movie. There is a scene involving a haunted nutcracker in the shorts middle that was the most horror based segment. It was well put together and vaguely creepy but it felt a bit seperate to everything else that was going on. There is a section of the poem narrated by Hyman at the films conclusion which was atmospheric, but I did have to rewatch it with the subtitles on to make out what was being said.

What I enjoyed most about The Erl King were the scenes involving the two characters, and I thought the idea of the titular being was handled well. The music is what brought this all together for me, and while I am not entirely sure what the plot was all about this was an atmospheric and haunting enough. Check it out for yourself below.