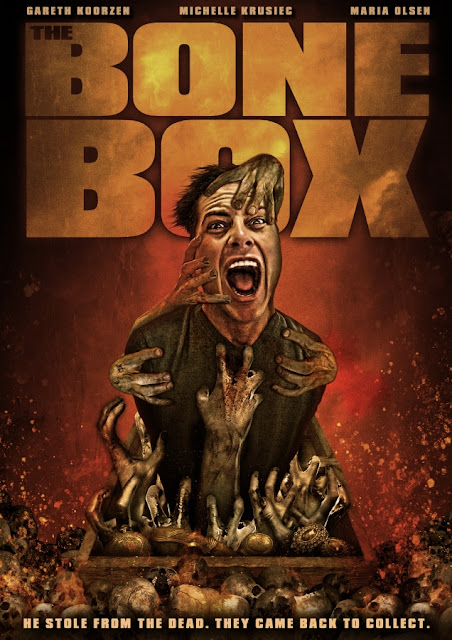 The Bone Box is a dramatic horror that was written and directed by Luke Genton in his directorial debut. Outside of the intro the entire film takes place in a small house, and due to the way it plays out it felt very much like a stage play. Because of this it is a very talky film, a lot of the hour and a half run time events proceed at a sedate pace, though technically a lot is happening.

Gambling addict Tom (Gareth Koorzen) owes a lot of money to local thug Benji (Aaron Schwartz - Guardians of the Galaxy: Vol 2) and in his desperation he has gone grave robbing in the cemetery that is next to his recently widowed Aunt Florence's (Maria Olsen - By Day's End, The Daughters of Virtue) house he is staying in. Tom begins to start seeing things around the house, things that seem to relate to the people whose graves he robbed. Has his guilt over his crime gotten to him, or is there something far more supernatural going on?

I wasn't prepared for how slow The Bone Box was going to be, but once I realised the type of horror this was I got more on board. The general plot reminded me quite a lot of Edgar Allan Poe's short story The Tell-Tale Heart. By all accounts Tom has gotten away with his crimes, yet his insistence that he is being haunted by the spirits of those he has wronged is what propels the story to its tragic conclusion. This is all subtle, and much of what he is hearing and seeing takes place around other characters who are not experiencing the same things. One of his victims was a young boy who got killed in a hit and run while on his tricycle, and with this one for example Tom keeps hearing the ringing of a bicycle bell. The horror is constant but it is never over the top. It slowly bubbles, and shows itself in moment to moment glimpses of shadowy figures that are there one moment, gone the next. The Poe feeling comes mainly from the box in which Tom keeps his stolen trinkets, he keeps finding himself drawn back to it, to check the contents are safe, and to look for new places to hide it.

We are shown the film from Tom's perspective and so it is never made clear if what is happening to him is all in his mind. Co-conspirator Elodie (Michelle Krusiec - The Invitation) serves as the films voice of reason, she gives far more rational explanations for everything that Tom says is happening to him, but as to her own character she was kind of bland. Tom was a hard character to like, he appears remorseless for his crimes, and when you take into account he has even robbed his recently deceased Uncle's grave it's hard to pity his situation. He is in a desperate pickle, yet the film goes out its way to show this was one of his own making. Even with the knowledge that his wife died tragically a year back is not enough to elicit much pity with him, we only see the character at his worst, there are several flashbacks but these are not enough to make Tom seem human, as he appears almost outwardly sociopathic at times. Olsen does a great job as the Aunt, she gives an understated performance which is what was needed and was a highlight for me.

Due to what happens throughout The Bone Box I couldn't shake the feeling this would have worked great as a stage play. The small and sterile looking setting of the house means the focus is very much on the protagonist at every point of the movie. With the majority of this being figures appearing around the house it did begin to get a bit stale feeling at times, the same tricks are used time and time again. Some, like a figure in a painting moving position were effective and suitably strange. That was an outlying example, though even with the repetition here the scenes always felt and looked good, thanks to special effects that were low in frequency but of decent quality, and is proof that jump scares are not needed in horrors if you are making your film correctly.

The Bone Box was a nice modern interpretation of a classic ghost story, and one where despite the reuse of ideas it never became a bore to watch. My main complaint is that I wish Tom had been vaguely more sympathetic, as the more this went on the less I found myself caring what would happen to him. The Bone Box was released on 4th March on Prime Video thanks to Terror Films, additional viewing platforms are to follow. It is also due to premiere on Shudder at some point this year.

Posted by Daniel Simmonds at 08:43