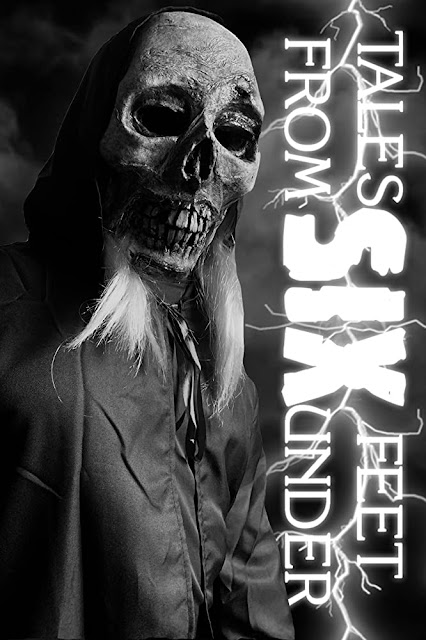 Tales from Six Feet Under is the latest horror film from Nicholas Michael Jacobs (Night), and like his previous movie; Urban Fears, it is also an anthology. At forty five minutes this one is shorter than his previous films, but it also is the most well made one. Again, like with Urban Fears, the short films included here all take place in an urban setting, but here it is all shot in black and white. This also coincidentally is the second anthology I've seen in the past month that features a graveyard as the jumping off point for the various shorts, the other one being the great Nécrologies.

Tales from Six Feet Under is made up of three different short films, and a very brief wraparound segment. A ghoulish figure named The Visitor (Jacobs) visits the graves of three different people who died in horrific circumstances. The first short is Joe Roth (2000-2017). In this one the titular Joe (Brian Jacobs - Urban Fears) is asked by his dad to clean the basement. While tidying it up he comes across a Ouija board and despite his father's warning text to leave it alone he decides to give it a go. Out of the three shorts this was the least interesting one, purely because it felt like the least original, and I didn't feel the monster design looked that good (the monster played by Gianna Jacobs from Night). This started the trend of referencing past films, something Jacobs always does well. Showing a box set of Tales from the Crypt at one point is a clear reference point to Jacobs inspirations for this anthology (along with Creepshow), and seeing a poster from the Ash vs Evil Dead series was another cool moment. Later shorts in this anthology feature references to both Night and Urban Fears, while there is even a comic titled 'Tales from Six Feet Under' a character is seen reading. While Joe Roth was the weakest it is also the shortest so it was quickly time to move onto the second short.

Sam Hooper (1998-2018) was a clever short that was also quite meta. In this one Jacobs plays a fictionalized version of himself who is sat a home trying to think of what his latest horror film should be. There are a series of false starts with different genres of horror being shown up to a certain point until the footage pauses and you are brought back to the filmmaker character sitting in his kitchen. Genres covered include disaster, slasher, and found footage, with that last genre in particular it seemed maybe Jacobs was making fun of his previous work when he comments something along the lines of it seeming a bit dull (the found footage segment in Urban Fears didn't get off to the most exciting start). This short got more ridiculous as it went along, but in a good way. Set to the background plot of a killer on the loose in the area the two stories eventually meet up to give a fun and stupid conclusion.

The final story is titled Jennifer Burton (1999-2019) and features Alexis Beacher as the titular girl. It is her birthday and her boyfriend has stood her up, so when a stranger starts texting her, purporting to be a friend from her past she finds herself drawn into the text conversation. This one played out like an urban legend and I enjoyed the place it went to. A lot of this short is made up of a text conversation between Jennifer and the texter, I did feel this part went on for far too long and found myself a bit impatient for the story to move on. 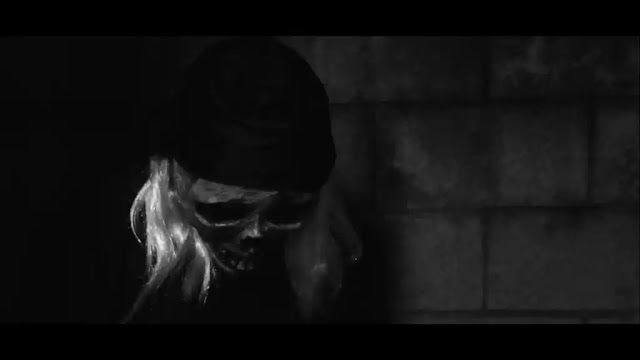 You can see indie films where they strive to do too much and fail, and then you have ones like this where it is obvious Jacobs knows his limitations, and so sets out to tell a story playing to his strengths. Each story featuring mainly just the one character works for this format, and this is all backed up by a simple, yet effective score that maintains atmosphere that would otherwise be lacking. Jacobs describes the film as a comedy horror and that term works, it allows for the effects to not be the strongest, while allowing an element of fun. The filmmaking here felt more polished than the directors previous films, especially with regards to the sound design. A complaint I had with Urban Fears was that it sometimes felt padded out to fill a longer run time, here, with the exception of the text chain in the last story everything seemed a lot more streamlined. The short length meant I was left wanting more, the end credits took me by surprise as I hadn't realised it had been going for that long. I will take that over being bored and clock watching any day of the week though!

Tales from Six Feet Under might not seem amazing budget wise when you compare it to other indie horrors, but this is indie horror in the legitimate sense. This can be seen from the cast that seems to be mostly made up of family members, and also the end credits that has Jacobs credited with being responsible for pretty much everything. When it comes down to it, I am partial to anthologies and this one wasn't bad at all. Tales from Six Feet Under is due out on Amazon Prime Video on 15th April.