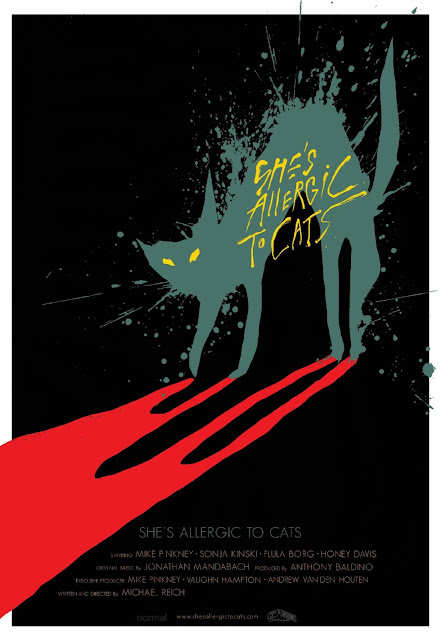 I figured the one good thing about this pandemic would be the amount of free time I would have to work on my blog. Instead it is the opposite, ended up not only still working full time, but the added bonus of all holiday being cancelled and so I'm not going to get a chance anytime soon to catch up on my outstanding posts. I'm currently fit to bursting with movies to watch for review and so I need to be a bit more picky. Director/writer Michael Reich's She's Allergic to Cats didn't sound like horror in the traditional sense, but it sure sounded unique and so I knew despite my new found pickiness I had to check it out.

Mike Pinkney stars as Mike, a dog groomer in Hollywood with aspirations to make films. As a hobby he makes video art, and his big dream is to re-make his favourite horror movie Carrie, but with cats playing all the parts. One day at his day job he meets the mysterious Cora (Sonja Kinski - Holidays segment "Mothers Day") and instantly they form a connection. They agree to a date, a date that will tragically change their lives forever... 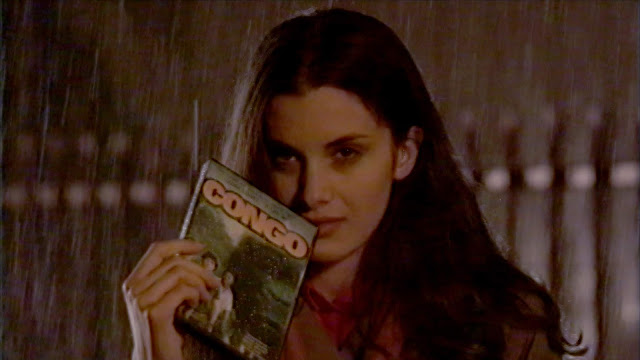 She's Allergic to Cats is a really bizarre film, and that aspect is what drew me to it. It straddles several different genres, it is both horror, romance, and comedy wrapped up in an art house bow. Art house can be a tough style of filmmaking to love, I sometimes feel the abstract nature of it can hide deficiencies in the storytelling. Here it is pure art house at times, my unofficial criteria of this genre includes nightmare sequences, non sexulised nudity and a general unraveling of cohesiveness. This had the feel of a more indie Garden State, helped by the fact that Pinkney really reminded me in look of Zach Braff, and how the main characters of that film were also oddballs like Mike and Cora were.

What I liked about this film is how there is a shift in tone as things progress. The film is split into three segments. The first third is the most out there. Mike's video art is something he is shown making in his rat infested apartment, but the film itself also includes his art as part of its makeup and so it all becomes a bit meta. Is the film itself a creation of Mikes or is it coincidence the style exactly matches what he makes. I loved the subplot about him wanting to make a cat version of Carrie, these parts were so surreal, segments of his dream film bleed into the actual movie at many different points.
The middle section of the film became like a positive acid trip and was where the romance part came in. The whole first section of the date that the film had been leading up to was like a fuzzy dream. Characters talk quietly to each other, and their journey in the rain had a hazy magical feel, always underlined by the reality of the world they were in. It is the final third where it felt like the acid trip turned bad, a nightmare sequence of abstract images, sounds and sights that was wonderfully put together. This whole five to ten minute moment was superbly edited, ending on a strong image that typified how strange this whole film was. 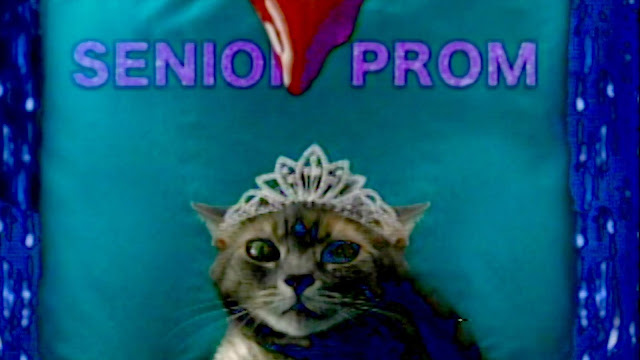 Occasionally She's Allergic to Cats can be a bit exhausting to watch. The plot itself is simple, but there are so many strange elements due to the visual thought patterns of Mike being displayed on screen, with all sorts of effects and filters that the film can look quite busy. It reminded me of the little video title card animations you would find on early 90's MTV, or in a more modern sense the tiny intro credit sections of Better Call Saul. Some parts of this grossed me out a bit, this shows the world in a raw sense, bits like explaining in detail how to clean particular parts of dogs I could have done without. Cora became the standout character here, and it was cool how this is shown to be a meeting of minds rather than a physical attraction for the characters. It is well into the second half that Cora is finally shown on screen without her features being blurred out.

She's Allergic to Cats isn't going to be a film that appeals to everyone. If you don't like art house then there is nothing here that will change your mind. I thought the romance part of this was beautifully done, and it ends on a strong note. It did at times get a little too busy with the amount of things it is showing to the viewer but it was something that was far different to other films I have seen recently. She's Allergic to Cats came out on VOD on 7th April, it can be rented or bought on iTunes and Amazon Prime Video thanks to Giant Pictures.