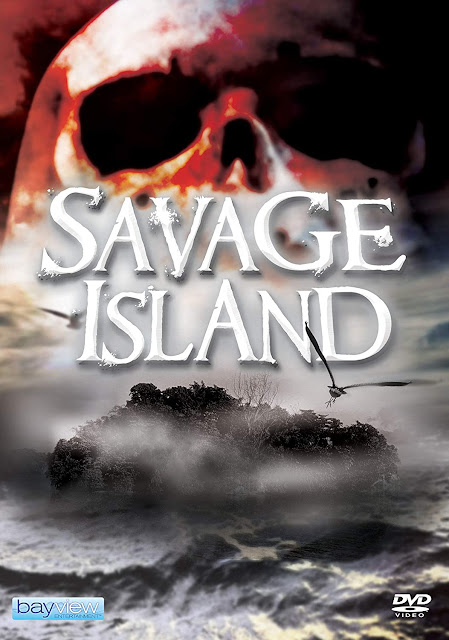 Savage Island is a nostalgic time capsule from when all indie films seemed to suffer technology limits and so had a certain 'look' to them. It was the first film from writer/director Jeffery Scott Lando, and going by the vibe of this one I'm not surprised to see his future film credits include Alien Incursion and Roboshark. This is low budget, and at the nasty side of horror, yet the script is so bad, and the performances often so off that this became something that was hilarious at times. Seeing as how the director went on to make actual comedy horrors I can only think this was done purposely.

Julia (Kristina Copeland - Alien Incursion) and her husband Steven (Steven Man - Alien Babes) have travelled to the remote Savage Island along with their baby, in order to spend some time with Julia's family who live there, which includes Don S. Davis (Twin Peaks, Stargate SG-1) as Keith, her father. Also living on the island are the Savages; a family of rednecks who are squatting on the land. During a drive from the shore to the family home, Julia's brother, Peter (Brendan Beiser - The Boys, The X Files) accidentally hits and kills the squatters youngest son. The Ma and Pa of the group demand the visiting couples baby as payment for the death. Obviously this offer is refused and so begins a night of bloodshed and mayhem as the rednecks do all they can to claim what they see as rightfully theirs... 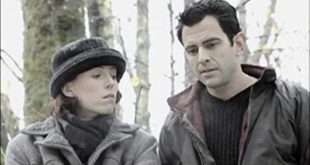 I don't know if it was the particular screener I received for review but the picture quality in this film was terrible, it was grainy and murky often with colours appearing desaturated. The night scenes in particular took a hit on quality, and as far as I can tell, all outdoor night scenes were filmed in black and white for some reason. This poor quality actually improved the picture I think, there was a strange dream like feel, not like a calm collected dream, but more like an off kilter nightmare in which anything can happen. The horror here is nasty, the family reminded me a bit of the one from The Texas Chainsaw Massacre, and they are certainly a sadistic bunch. There is a fair bit of violence dished out, highlights include a character getting their tongue cut out, a wooden stake thrown like a javelin into the belly of a character, and someone else at one point getting an axe embedded in their back. Due to the low quality footage this all looked pretty good. Not as much blood as you would expect but it all looked dirty and raw.

I wish this had stuck to just being a nasty genre flick without the need to have so many different actors all doing their best to over act. To be fair it could be down to the script which was terrible from start to finish, but it isn't helped by the actors. Julia's brother Peter just might be the most irritating character I have ever seen in a film, Beiser speaks all his characters lines like he is on stage doing stand-up, it was impossible to take him seriously. Even when he discovers he accidentally killed a child he is still over empathising his lines like it's all part of a zany skit. Then there is the character of Steven who has all the personality of a sponge, it's no wonder him and Julia are having marital problems. On the redneck side you have half of them acting like caricatures, one in particular, an obvious inbred spends the whole run time hootin' and hollerin'. Half of the performances sounded like they were dubbed over voice work for a cartoon (some of the characters voices were in fact dubbed it turns out). Picking the best of a bad bunch I thought the character of Julia was not half bad, Copeland does a decent enough job of the confused, distressed and drugged out her mind girl, and her drug trip scenes were kinda neat. Davis was pretty fun as Keith for the most part. Then there was the leader of the redneck family who almost felt like Negan from The Walking Dead with the self confident way he acts, but his character was ruined in one scene where he charges at someone while yelling, comical.

The story was really stupid but kudos for it to playing out a bit differently than I expected. There are shocks and surprises along the way, some of the characters really surprised me with what happens to them. I figured it might be some type of Straw Dogs type siege movie, instead going far more Chainsaw Massacre (as previously mentioned). The ending was the icing on the cake, completely implausible yet also entertaining in a silly way.  At times it almost felt like it was entertainingly bad but for me there were a few too many irritating moments.

Savage Island is a terrible looking movie that earns points for its crazy storyline, and nice looking effects. However, with half the cast being fantastically annoying this repelled me as much as it drew me to it, but was a fine line. Savage Island is now out on DVD thanks to BayView Entertainment.