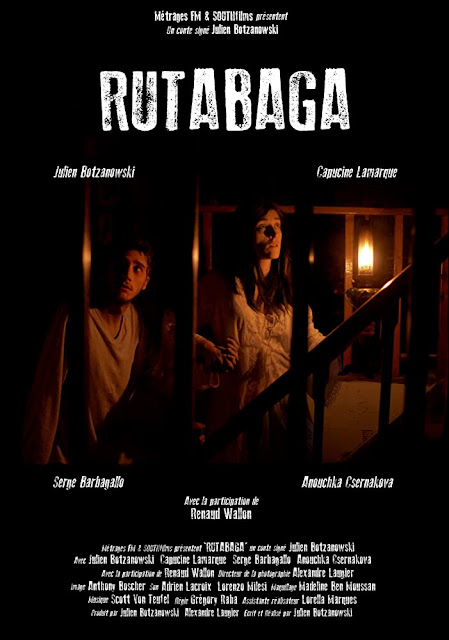 Rutabaga is a French horror that was written and directed by Julien Botzanowski, who also stars as the main character. I at first assumed 'rutabaga' was a French word, but as it is revealed in the movie it is actually the name of some sort of turnip hybrid. This was an odd one to watch, not much at all happens, yet this wasn't a slow film, there is always things going on. The story is purposely vague, open to interpretation and often to a fault.

After an argument with his girlfriend, journalist Adrien (Botzanowski) is given an assignment deep in rural France. He has been asked to go to a newly opened remote guest house in order to write a promotional article. He is greeted by one of the owners, Mademoiselle Agathe (Anouchka Csernakova), and spends the next few days there, his article facing some difficulties due to no electronics seeming to work in the area. When he is due to leave the owners insist he stay a little while longer, but the more time Adrien stays at the guest house the more he begins to suspect that something really is not right with the place. 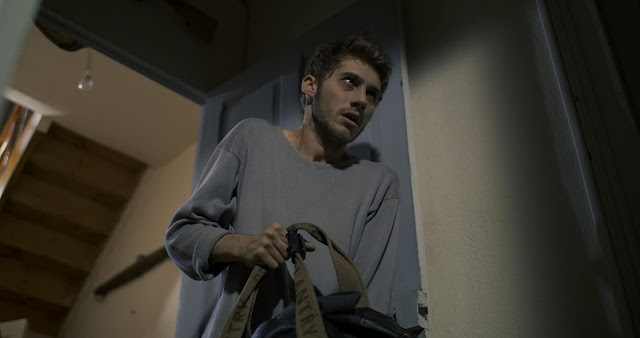 At seventy minutes in length it is no small wonder that this felt like it raced along at breakneck speed. Usually if not much happens in a film you would feel like it is a slow burn, here there is a whole lot of nothing, but this nothing maintains some solid atmosphere. This could be accused of being a bit tame in terms of what is shown, but for me the mystery was just about worth it. There are times where characters see things off screen and react to them, but the viewer never does get to see what they have seen. There is a bunch of exposition thrown in towards the finale, but it is said in such a way that the character speaking assumes prior knowledge and so it was never clear exactly what was going on.

There are the four main actors here, and there is no real insight into the type of people the characters they play are. With Adrien he plays the fish out of water protagonist, bumbling from one situation to another, not really even aware of the danger he is in. Capucine Lamarque plays Héléne, a maid working at the place. I liked how this character wasn't sexulised, one scene has her sharing a bed with Adrien but there isn't even the slightest hint of anything more than comradery, with her just as in the dark about the strange goings on as Adrien is. The story often was on the border between being baffling and mysterious, it just about manages to win as I was able to come to my own conclusions due to the amount of information you eventually get. That isn't to say I was confident in my assessment, it would have been nice to get a little bit more explanation. 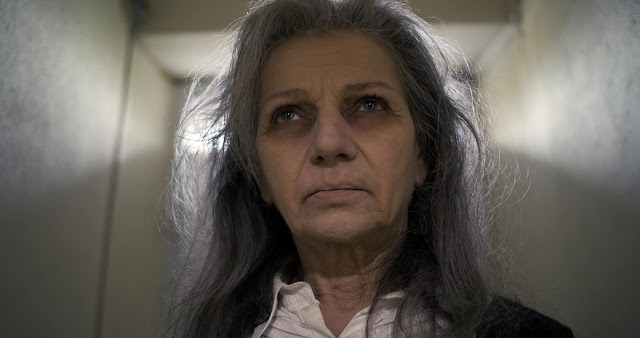 For the longest time I was not sure how far down the horror route this would go. Eventually we get to the stage where The Blair Witch Project style stick figures, and bundles of sticks are appearing, and with Mademoiselle Agathe and her friend and co-owner Monsieur Pierre (Serge Barbagallo) acting the weird way they do it began to feel more and more like the Baker family from the Resident Evil VII: Biohazard video game, no bad thing to be honest. Events do ramp up to a point where Rutabaga becomes pure horror, but even then this is a bloodless affair, it is more the suggestion of horror which makes the film tick along.

Rutabaga uses little to tell a lot. Throughout there was a good sense of atmosphere and a feeling of isolation. Adrien might not be the most compelling protagonist but Botzanowski does a fine job, as does the rest of the small cast. Light on spectacle, but competently made makes for a bizarre and vaguely unsettling ride. Rutabaga will be released worldwide through TMAA Releasing, and is on Amazon Prime thanks to Bayview Entertainment.