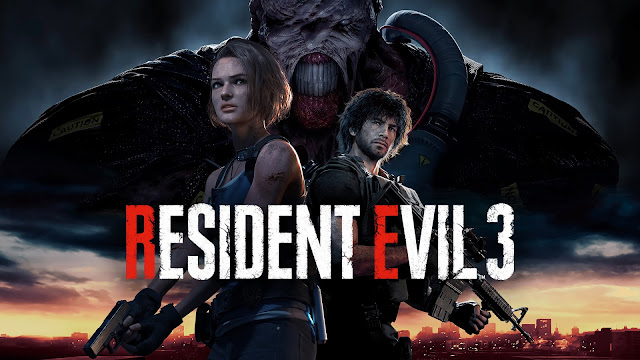 It is a good time to be a Resident Evil fan, last year saw the remake of Resident Evil 2, and now hot on its heels is the Resident Evil 3: Nemesis remake. The second game in the series is one of my all time favourite horror games and its remake could not live up to the legacy, so I looked at this latest remake with a critical eye. Last years game was undoubtedly fantastic, yet the reduction in changes between the A and B playthroughs, and key enemies and locations missing irked me. Resident Evil 3: Nemesis was the weakest of the original three games, and so I was more inclined to enjoy the way things have been changed up, and boy have they been changed up! Something that can be seen immediately. I will try and keep spoilers to a minimum but some things happen so early on that it would be impossible not to mention them. Also, as this is a remake I think it is fair game to mention enemies and locations that feature in both this and the original, after all it is over twenty years old.

Former S.T.A.R.S member Jill Valentine tried to expose the Umbrella Company after her and her team found a secret bioweapons lab of theirs hidden in the Arklay mountains (the events of the very first game). However, Umbrella's hold over Raccoon City was so strong that her report was suppressed, and she was kicked out of the Police. A few months after this happens there is an outbreak, the same virus that transformed the staff at the secret lab into flesh eating zombies has now spread across the city. Jill's plans to escape Raccoon are brought forward with the arrival of a hulking great bioweapon codenamed Nemesis that is on a mission to kill her and all remaining S.T.A.R.S members. With the creature forever in hot pursuit, Jill teams up with an Umbrella mercenary named Carlos in order to both try and rescue the surviving civilians, as well as find a way to escape the doomed city...

I had heard from early reviews that Resident Evil 3 was a heck of a short game, and then someone on Facebook gave the news that his initial playthrough only took him four and a half hours. For a full priced game that is in no way value for money. Thankfully, my initial playthrough took me nearly seven hours, that includes roughly fifty minutes of retries (I died nine times over the course of the game). My second playthrough did actually take me just four and a half hours and I reckon I could shave at least an hour off that time. I had a hell of a blast playing this, it is not all perfect but the first two thirds of the game in particular were some of the most fun video game times I have had in recent memory. It isn't a lie to say on many occasions I was grinning ear to ear. With the original game so fresh in my mind it was an absolute joy to see how they have changed up locations, objectives, motivations and characters. After a fantastic live action intro (that I was not expecting!) you get thrown right into the thick of it, the Nemesis monster appears much earlier than I had expected. My final problem with the game is the boss battles, there are only four in the game, two of which play out almost identically to each other.

It feels like the original game got disassembled and then put back together in a way that always surprised and delighted me. One example is that it is now Carlos who heads back to the Police Station (the setting of the second game) rather than Jill. This segment was one of the absolute highlights, it shows how some of the many corpses came to be there in the second games remake, most notably, we finally get to see how poor Marvin Branagh got bit, and that destroyed wall in the shower at the station? We finally get to see how that came to be broken. There are now two moments in the game where you control Carlos rather than one, in total I would say his sections are at least three times longer than the time you spent with him in the original game. A complaint I have always had with the locations in three is just how small they all were, here there is at least one location that is far bigger than anything seen in the original, while there are a whole host of new locations that Jill ends up in. It plays with your expectations by the way the game is all arranged. An example is the clock tower location, this makes an appearance here, but in a different way than you might expect.

Characters have been changed up, notably with Tyrell Patrick. I am sure Tyrell is meant to be the character who is shown getting killed by the human antagonist Nicholai at the hospital in the original. Here he becomes a key side character, one who has a large impact on the events of the game. It was also a real geek highlight to see how Brad Vickers is treated here. Some twenty five years or so since he abandoned his teammates at the Spencer Mansion he finally redeems himself in a small but very memorable role. Characters often have slightly different motivations than they once did, and events play out differently to what you might expect. The graphics are frequently stunning, the lighting is wonderful and character models beautiful. I loved how battle damaged Jill gets, while Carlos's hair is magnificent. I always felt Nicholai was a decent bad guy, here he looks the part as well, a real scumbag (with a great voice actor) which characters are quick to point out. There is a load of swearing throughout the game, both vocal and in files found, coupled with the more realistic graphics makes for a mature feeling game. I have to say just how surreal it is to be playing a game about a virus loose in a city when we are living in such times as these, the hospital setting in particular felt really weird with uncanny similarities in some of the files and reports you find.

A lot of the enemies have returned, often with new designs. The frog hunter monsters now look like an enemy from Silent Hill 3 and are in a far more logical location, while the insectoid monsters have had their presence reduced to just the one location, and made a lot weaker and smaller. The highlight for me were hunters (reptilian creatures), they looked terrifying, not helped by the fact they are still able to one hit kill you even if you are on full health. Zombies are plentiful, and have some upgraded versions to them. Like last years remake there are also missing enemy types, once again spiders have been kicked out the party, and gone are infected crows (they you can hear them at times), leeches and even the giant worm boss (it's location at the graveyard is also MIA). Nemesis plays much less of a part here. The Nemesis in the original felt like an agent of chaos. Sure he had scripted moments, but he also had a lot of times where he was in the level hunting you down. You could never quite relax, worried if behind every door he would suddenly pounce. In this game however he only free roams in the games first third, after this he is relegated to heavily scripted chase sequences, boss battles, and cutscenes.

The third game in the original series was where the action really ramped up, and so this remake doesn't deviate from that. Gone is the mine launcher, its ammo now appears as part of the grenade launchers repertoire. There are no additional weapons that I could see, you get various types of pistol, a shotgun, and there is a magnum hidden somewhere (I managed to miss it on my first playthrough!). Carlos still has his assault rifle, and both characters get grenades and stun grenades to use. The dodge mechanic is here as it was in the original, but works a lot better than it ever used to. Time it perfectly and you will briefly become invulnerable. Combat was a lot of fun, but the guns, even the higher powered ones sound pathetic when they are fired. The terrific epilogues are no longer in the game, nor are the branching pathways. It was disappointing to learn this, but replay value comes in the form of a shop in which you can buy such things as medals which when held in your inventory increase your defence, healing and attack points, new guns, useful items, more item slots etc. Sure it is fun and all, but surely it couldn't have been much work to create a series of new epilogue screens?

Having played the game twice over now I can state that the criticism of its length doesn't bother me, this became something that was like watching a playable movie in which you still have agency, joyous brain popcorn. Also, this game released with the multiplayer Resident Evil: Resistance, so technically it is only one part of a larger package. I really enjoyed my time with Resident Evil 3, while it does falter a bit in its third act and Nemesis isn't in the game as he should have been these elements were not enough to lesson my experience.
I wasn't that much looking forward to playing Resident Evil 3 unlike I was for last years release. That maybe why I am just so blown away by this game, I would say it eclipses my enjoyment of the original, something that couldn't be said of Resident Evil 2. Even with its flaws this is a game that exemplifies just why video games are such an important part of my life, perfect, wonderful escapism. Included is my entire streamed playthrough.