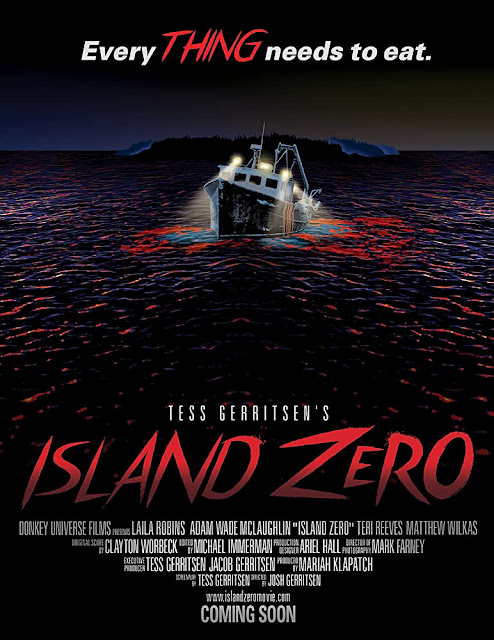 Sometimes a film just comes out of nowhere and smacks the hell out of you with how enjoyable it is. Such was the case with Island Zero which funnily enough I had zero expectations for. This was director Josh Gerritsen's directorial debut, and it was written by his mother, Tess Gerritsen. It starts off like a typical sea based creature feature, the underwhelming prologue brought to mind the dreadful Creatures of the Abyss, however this soon turned into something really quite special.

This takes place on a remote Maine island whose inhabitants one day find themselves cut off from the outside world. The electricity and phone lines have stopped working, and the weekly ferry fails to show. Days pass and eventually the generators run out of fuel, a few boats head out to make the 40 mile trek to the mainland but are never heard from again. The remaining survivors that include among them marine biologist Sam (Adam Wade McLaughlin) and his family, local doctor Maggie (Laila Robins - Homeland TV series), and visiting author Titus (Matthew Wilkas - The Mummy) soon find themselves being hunted by some sort of creature from the sea. 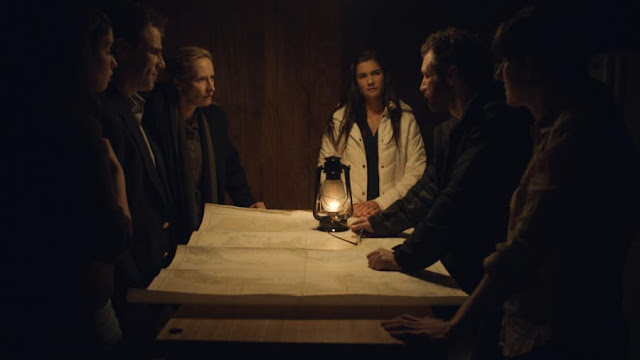 There is a gradual shifting in gears of the horror that is unfolding. Initially this plays out with the focus on the residents and their dwindling supplies, scenes such as one set out a general store in which the shelves are empty, and shoppers are fighting over supplies brought back memories of the stock piling mass panic that seemed to sweep the globe at the start of this damn epidemic we are facing. To bring up the urgency this first act plays out as a series of segmented days, each day bringing with it more and more hardships. The second act deals more with the unseen threat from the sea, and as the story progresses this threat becomes more and more prevalent. This condenses the scope of the danger, leading upto the third act in which characters literally have no option but to make a stand. The feeling of unknown danger is the backbone of Island Zero, characters spend most the film reacting to unfolding situations rather than the usual sort of ridiculous plans protagonists often dream up. I got the strangest sense of both The Mist, and The Thing while watching this, I think it was to do with a handful of characters being trapped in an isolated location, hunted by a mysterious entity. This feeling prevailed all the way up to the ambiguous ending that gave off a tiny sliver of hope even if a lot of awful events had occurred, and with the cast of characters dramatically dwindled down from the movies start.

For anyone who didn't already know, sometimes less really is more. It is huge credit to the filmmakers that they build so much tension and suspense in a picture where you don't actually get to see the threat until a good hour and twenty minutes into the one hour forty run time. Surprisingly this does not make for a boring film, instead I was glued to the screen. Characters get attacked from off camera, and victims bodies are discovered in really gruesome ways. A memorable part was when the bloody remains of a skeleton are discovered laying on a bed. As to the attacks of the creatures it is shocking with just how violent things get, to give an impression, at one point a character is literally ripped in half with no warning, it just happens. The violence always comes right out of nowhere, the lack of build up and tension makes it all the more impactful. One of Hitchcock's most famous quotes was about how suspense is much better than surprise, Island Zero on occasion proved itself to be the exception to that rule. 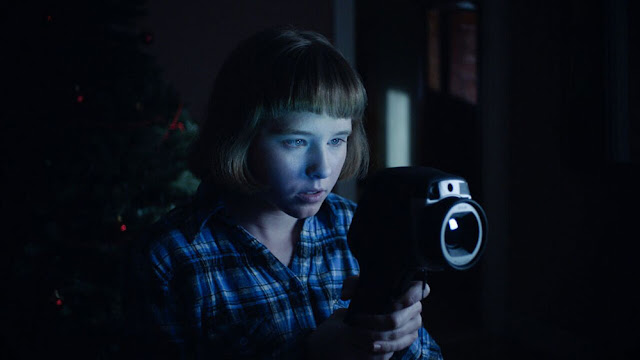 The characters here were a strong bunch, I liked the performances of all the actors, even Sam's daughter wasn't bad, I'm assuming she was meant to be autistic, but this was downplayed rather than made into a plot point. One of the ways characters are kept interesting is by how they have hidden layers to them, Maggie and Titus in particular had character paths far different to what I initially expected them to have. It was also neat how the seemingly unrelated prologue is later given much greater context. For what could have been a typical uninspired creature feature this instead goes to some genuinely interesting places, twists occur that I just did not see coming. It isn't all perfect though, such as the discovery of a fatal weakness the threat has, something that always occurs in these sort of movies. Also, something that bugged me is how Titus's laptop was still working long, long after the electricity had gone out and the generators had run out of fuel. Maybe he had extra batteries for the thing, but who does that? It sounds like a small thing, but when literally every single item requiring power had died many days previous it seemed weird that darn laptop was still in perfect working order. Also, while this film never dragged I still felt it could have benefitted by being sliced down by five to ten minutes.

Island Zero was a fantastic low key movie that maintains a rich atmosphere of mystery and hidden peril all the way from the start (ok, with the exception of the bland prologue) right up until its thrilling finale. How this manages to do so without really ever showing much on screen is a marvel of the modern age. Like a fish caught on a line I was hooked with this movie, the 4.6 average rating on IMDB be damned, this was a great film. Island Zero is due to be released later this year thanks to High Fliers Films. Also, the effective soundtrack is out now on various music platforms, I'm currently listening to it on Apple Music as I write this.