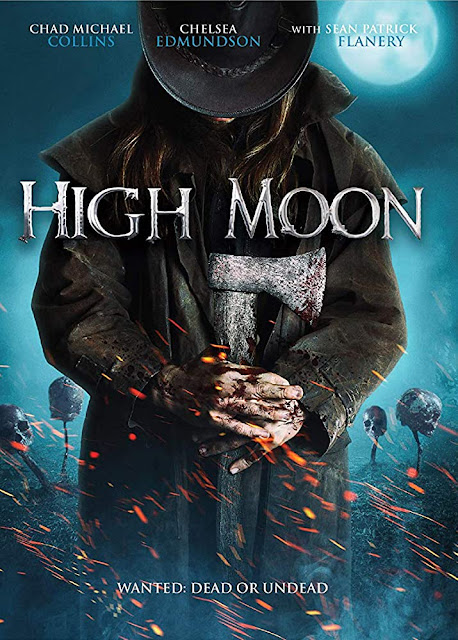 High Moon (also known as Howlers) is an action horror that was directed and written by Josh Ridgway - The Sector). Werewolves are one of my least favourite movie monsters, I just find them so bland and unexciting and so the prospect of watching a film with them as the enemy wasn't one I found that appealing. However, while it is a small pool High Moon might just be the most entertaining werewolf film I have yet to see. High Moon is basically Demolition Man crossed with Near Dark.

In the 19th Century, gunslinger Colt (Chad Michael Collins - Creepshow TV series story 'Skincrawlers', Lake Placid 2) is a monster hunter. In a Wild West town he has a final showdown with a gang of werewolves, led by the notorious outlaw Willie Price (Tom Zembrod - Silhouette, Knucklebones) and he manages to kill them all with the aid of an ancient sceptre, before being killed himself. In modern day Colt awakens to find himself mysteriously resurrected, and soon learns the gang of werewolves have also somehow been brought back to life. Teaming up with the woman who discovers him, Lucy Andrews (Chelsea Edmundson - Killer Eye: Halloween Haunt), as well as the sheriff of the town he finds himself in, Ethan (Matthew Tompkins - The Harrowing, Sicario) he sets out to once again defeat his old foes. 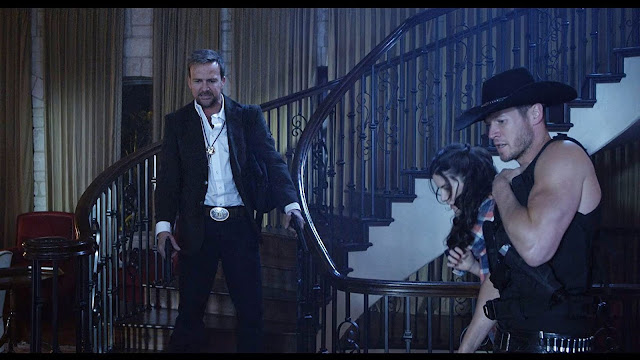 I said in my introduction that this felt like a couple of different films combined, and that is one of the most compelling parts of High Moon. Demolition Man had two longtime foes transported from modern times to the future, and making the most of the future technology to continue their fight. Here you have the same but it is from the Wild West to modern times. For Colt this means he learns how to drive a car, and gets access to far better weaponry. For Willie and his gang they upgrade from riding horses to riding motorbikes, an early scene having them brutally taking out a local biker gang to steal their stuff in The Terminator fashion. Being a fish out of water there are many fun moments of Colt being confused and amazed by new technology. His character may be a warrior but he is friendly to all he meets, and so became a protagonist that I liked. Willie and his gang sadly take a little bit of a backseat to the story, they are the antagonists but mainly only appear in action sequences. There is only one moment of dialogue between the bad guys outside of fighting, it would have been nicer to see more of them as Zembrod made for an interesting bad guy. The rest of the cast were surprisingly pretty decent, and was nice to see Sean Patrick Flanery (The Boondock Saints) in a bit part as a corrupt Mayor.

The Near Dark influence is felt by the look of the werewolves themselves. These aren't people who change into actual wolves, or ones who actually require a full moon to transform. Instead these can morph at will, though even in their more human form they continue to have long nails and pointed teeth. They have a really grimy dirty look to them, that coupled with the small town the film takes place in felt similar to Near Dark's vampires. The makeup effects on them looked good, but in their werewolf forms these enemies did also happen to look kind of silly. Thankfully there is plenty of blood and violence, no end of people being bitten and clawed by them. The special effects are mostly pretty good, I did notice some obvious CG use to simulate bullet holes, and some blood sprays also seemed a little artificial. 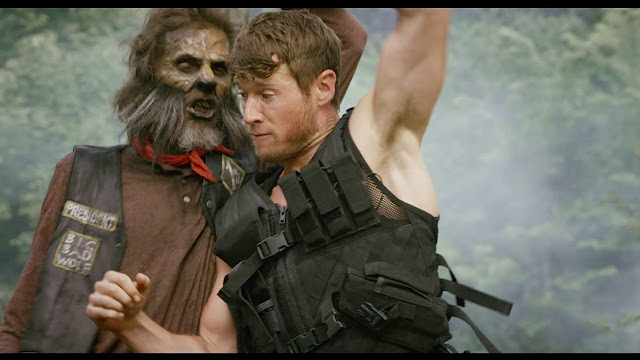 Some parts of the story for High Moon and some parts of the pacing felt slightly off. An early fight between Colt and the werewolves in a factory doesn't finish, the film suddenly cuts to Colt and his allies in a totally different location talking amongst themselves with no explanation for how they got away. The films ending was also a bit abrupt. There are plot threads left open for a possible sequel, I have no problem with that. What I didn't like was how much of the story was wrapped up via a news report, this includes mentioning the death of key characters. It felt like maybe they ran out of time or budget to make a more satisfying finish. Then there are parts of the story that felt underdeveloped, the whole supernatural aspect was perhaps wisely not explained very well, such as how Colt and the others came to be resurrected. There are also silly convenient moments, such as when Colt discovers Lucy happens to be on possession of a bunch of silver bullets, zero explanation given, but it helped to move the plot along.

I really enjoyed my time with High Moon, something I did not expect to do. Sure the story is dumb, but it is also entertaining and had me fully invested in what was going on. I also liked how the werewolves were shown here. Just about missed out on getting a higher score from me, but this was an entertaining movie. High Moon is due to be released later this year thanks to High Fliers Films.

Posted by Daniel Simmonds at 01:23