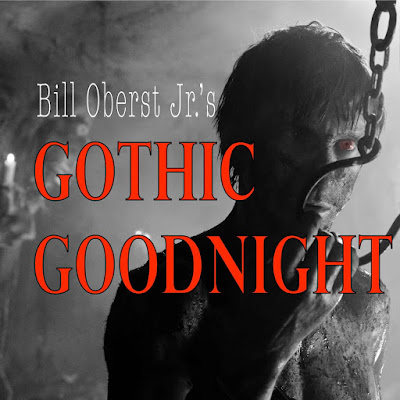 Bill Oberst Jr. (3 from Hell, DIS) is one of my favourite cult actors and so when I learned he had started up a horror podcast I knew I had to check it out. When he contacted me about Bill Oberst Jr's Gothic Goodnight towards the end of March there were just two episodes out, now there are five so it seems like the podcast will be a regular thing. He states this was a 'corona-virus-cabin-fever inspired podcast'.

Each episode is roughly thirty minutes long and mainly comprise of excerpts from classic Gothic literary work. Oberst Jr. presents himself in the persona of the keeper of an ancient library stylied on such icons as Vincent Price and Boris Karloff, who also did dark radio readings. The thing with Bill is that he has a voice made for speaking (I definitely do not have a voice for speaking!) and so anything he says just sounds amazing. He brings such inflection and gravitas to what he says that you can't help but be hypnotised. What works so well here is that he may be playing into a bit of a persona but he gives his own thoughts on the works he speaks about, not only that but he melds them into relevance for the current situation most of us are living in.

The podcast is designed to be listened to late at night, midnight specifically, and so he says even if you are listening in the day time to darken the room you were in. I admit when I first put this on to listen to my heart sank a bit to see there were now five episodes and not two to get through. That was before I had listened to any of it though. This was based on previous podcasts from people I admire, such as the comedian Bill Burr. Sure he is funny but his podcast in which he just talks about his life was not for me. Here though I was hooked, I listened to four of the five available episodes of Gothic Goodnight one after the other unable to stop. It was only because I wanted to experience an episode at night that I saved the fifth one. That was quite an experience, episode five has him reading Nathaniel Hawthorne's short horror story The Minister's Black Veil, which was first published in 1832. As I was listening to this, laid in bed in the dark of night (coincidentally at midnight) I started to drift in and out of sleep, my mind ripping me out of it each time I started to fade away so that I could hear the tale to its haunting conclusion. Bill speaks in such a quiet and intimate way that it feels like he is speaking to you directly, something which voice notes other listeners have left also attest to.

There is something comforting in these podcasts despite the Gothic excerpts, poems and short stories he reads. All the episodes feature this format, with some having a particular theme to them. Episode 2 for instance; 'Speak Of The Devil' explains itself, there an excerpt from Robert Louis Stevenson's 1884 story Markheim is read out, Episode 3, 'A Whole World Dying Tonight' is about sleep, specifically the sleep of death, while episode 4 titled 'Poe Boy Sandwich' features several works of Edgar Allan Poe, including my favourite story/essay of the whole podcast series so far, the amazing The Imp Of The Perverse, which was originally published in 1845 and which talks about something that is still relevant today in modern times. The choices for what are read out are perfect, at least to me who has never heard them before. To my shame I even own a huge compilation of Poe stories that I have yet to read. At the time I received it many decades back I had just started getting into the works of H.P Lovecraft, and that addiction had caused that other collection to fade from memory.

All this is to say that Bill Oberst Jr's Gothic Goodnight is my new favourite podcast, and the best thing about it is its free, available from a whole variety of places (I downloaded it from the iTunes podcast section). Check it out, and see for yourself, and check out the site for it also (here). I will sign off this review using the closing line to each of his episodes - It's always midnight somewhere...and in someone's soul...goodnight.

SCORE (based on the first five):

I thank you and your Rotting Zombie team from the bottom of my creepy little heart. It's an honor to be mentioned on the great RZ, and what you do for indie horror is appreciated by all of us who slave in its bloody trenches. So glad you liked the new pod.

I really should check my comments more! Thank you for bringing it to my attention, is the perfect thing to listen to last thing at night.