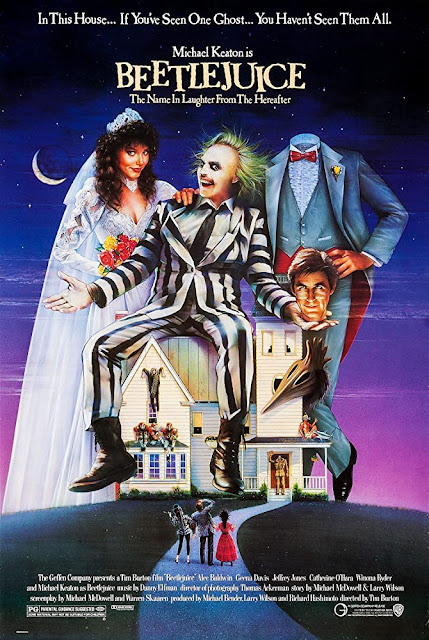 I was never taken with Beetlejuice when I saw it as a teen. At the time Tim Burton was my favourite director, Batman Returns remains one of my favourite films of all time, but for me there was something a little off about Beetlejuice. It shares plenty of elements with the horror genre but I never felt it went far enough. With its recent appearance on Netflix I decided to give it another chance, but it turns out this is one of the few times where my adult self and my childhood self have pretty much the exact same thoughts.

Adam (Alec Baldwin) and Barbara (Geena Davis - The Exorcist TV series) are happily married, and live an idyllic life in their sprawling house by a sleepy village. One day they get in a car accident which results in their deaths, a fact which they soon become aware of when they return home to discover quite some time has passed, with their house sold and a strange new family moving in. The family is made up of tasteless designer Delia (Catherine O'Hara - Home Alone, Frankenweenie), her long suffering husband Charles (Jeffrey Jones - Ed Wood, Sleepy Hollow), and their goth daughter, Lydia (Winona Ryder - Edward Scissorhands, Stranger Things). Adam and Barbara are distraught at all the changes the family are making so come up with a plan to scare them away, but in the process unwisely call on the services of a ghoul named Betelgeuse (Michael Keaton - Spider-Man: Homecoming, Batman) who specialises in getting rid of unwanted pests. 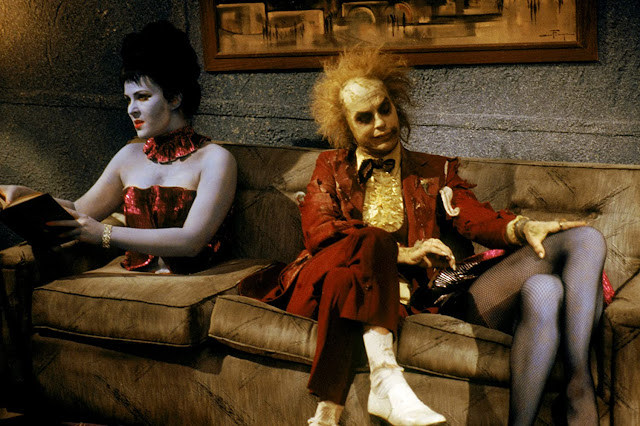 While it is not one of my favourites it doesn't take more than a few moments before it is clear this is traditional Burton in every sense of the word, usually a good thing. There is the typical Danny Elfman theme tune, while the monster designs are very familiar, I wouldn't be surprised if some of this design served as inspiration for the look of The Nightmare Before Christmas. Things such as the black and white pattern that appears throughout, and the gothic looking architecture. I can't recall what I thought of the effects at the time, but now they have dated a bit. That is not me saying it looks bad, practical special effects stand up a whole lot better than the truly atrocious CG of the early 2000s, but the stop animation worm for example do not look the best, nor does the super imposing of characters onto the desert hellscape that occasionally pops up. This is inventive though, parts like the couple visiting the afterlife waiting room are real highlights, including sights like a delivery man who is being moved around via a noose around his neck attached to a metal frame, and the explorer with the shrunken head. The moments where Adam and Barbara change their faces into monstrous visages also look fantastic still.

Where this film has always fallen down for me is with the story, and the pacing of the story. Rather than one clearly planned movie this often feels like a variety of ideas that play out together but never feel that well connected. There are many moments where scenes feel almost there own little mini skits rather than part of a larger picture, a weird fragmented feel that makes the simple story of the couple trying to get people out of their house seem more complicated than it needed to be. This also applies to the motivations of characters in the story, namely Betelguese. His character is treated as an ominous figure who must never be summoned, but then it goes on to show it is in fact really easy to get rid of him once he is summoned. There is an attempt also to turn him from comedic bad guy into a proper antagonist, a bizarre sub plot comes to the forefront that I still don't understand, something about him somehow being trapped at the house, with the only way for him to become free by marrying a human woman? This notion made little sense and just seemed to come out of nowhere to give his plot somewhere to go. 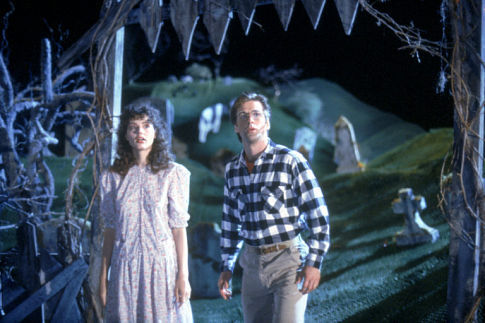 The actors are well cast, Keaton is random in a Jim Carrey type of way with the foul character he plays, but the character also become quite iconic, mainly with the way he overshadows everyone else with his manic actions. Adam and Barbara are needfully bland characters, the family they are up against made up of more crazy characters to fit the films oddball tone, both O'Hara and Jones are great in their roles, as is Ryder, but it is the character of Otho (Glenn Shadix - The Nightmare Before Christmas) who became my favourite.
The subject matter is horror, but the way it is presented is more fantastical. The scare tactics the couple use are lame but do make for one of the best scenes in Beetlejuice, the dinner party scene where the guests all get possessed and start a song and dance number remains endlessly entertaining to watch. In fact literally endless as once my best friend got so obsessed with that scene that she made us watch it on repeat for what felt like a good hour! Betelgeuse's scare tactics are presented as much more frightening and lethal than Adam and Barbara, but this doesn't translate to what is actually shown. His scene does look great, and are memorable, they just isn't scary either and so there becomes a disconnect between the terror the humans are displaying to what appears to the viewer to be crazy, yet hardly terrifying.

There is no doubt that Beetlejuice is a classic, it has stood the test of time and I can see why people would like this so much. For me, I just couldn't get myself fully immersed in this, the weird way it paces itself out, the baffling story elements, and the maybe too deep Tim Burton stylings made this a movie that I still think is fine enough, but isn't up there in the films I really hold in high regard.