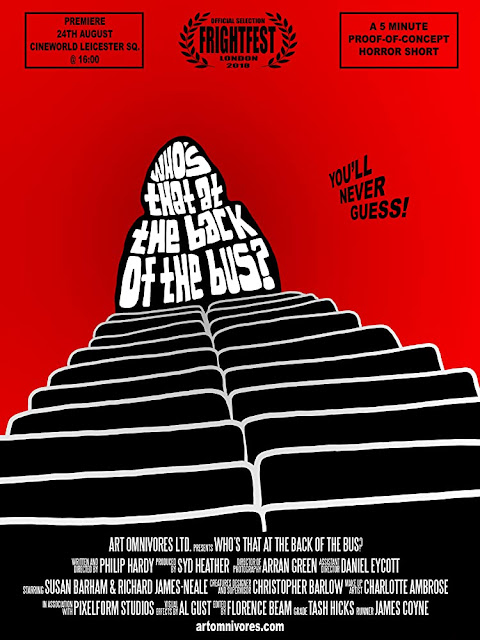 Who's That at the Back of the Bus? is another surreal horror from director/writer Philip Hardy (Moose Limbs). This takes a typical short horror film idea and does something to it to make it a little more unique.

An old lady (Susan Barham - Seven Boxes) gets on a nearly deserted bus at night. With a drunk man being on the ground floor (Richard James-Neale - The Legend of Tarzan) she decides to go to the top floor where it appears she is alone. However the reflection in the window in front of her seems to tell a different story...

At under five minutes I predicted the type of short horror this would be. These types of horror are dime a dozen, so usually a film of this type wouldn't stand out. However, there is what seems to be the usual Hardy twist in that rather than a ghost or demon, it is something far more silly presented as the threat. A lot of the film has the woman constantly checking the window reflection where she sees that it appears she is not alone, and then looking back to see nothing. it is the last minute where things ramp up. I liked the change up from the usual antagonist, and it is as darkly bizarre as I had come to expect. It also had a good design to it, more blood in one scene would have been cool, I can see why there wasn't though.

While the general idea behind this has been done before this was a skillfully made horror that again invoked something like The League of Gentlemen with the jokes removed. Its short run time means that Who's That at the Back of the Bus? is definitely worth checking out.