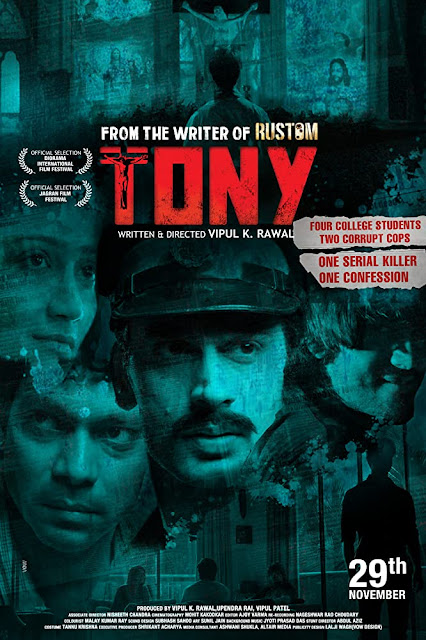 Much like Turnabout I had a feeling that Vipul K. Rawal's Indian thriller Tony might not actually be a horror film. Due to the subject matter I took a chance on it, as the synopsis did have some horror elements. In terms of the quality of the film making, and the general idea behind it this was decent enough, but the key part that drew me to this actually became background to the core story being told, and I think that was to the movies detriment.

Psychology student Ashish (Mahesh Jilowa) is discovered to be in possession of an unlicensed gun after he is stopped at a police roadblock. The frightened man is hesitant to reveal just why he had a firearm, but eventually he decides to tell his story. He, along with three other students had been given an assignment in which they had to analysis a person of their choosing. Martin (Dhruv Souran) decides to do something a little different, he secretly filmed a confession booth at a Catholic church in the hopes of being able to interview someone who had a dark secret. He thinks they have struck gold when they hear the confession of a man named Tony (Yashodhan Rana) who talks about having murdered many people. They manage to get in contact with this serial killer and the man tells the group that if they go along and witness his crimes then he will give them all the information they need for their project. Thinking this will make their careers the friends all agree to his terms. 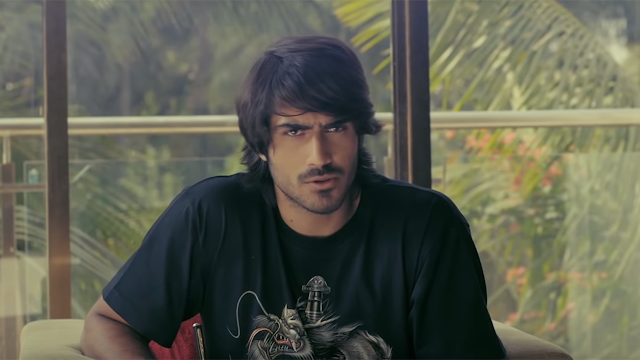 It seemed to begin with that the majority of the film would be Ashish's account of what led up to him getting found with a gun. In actuality it is around half the film that takes place in the past, huge chunks are dedicated to the present day, with a police officer investigating Ashish's claims. I figured the serial killer part would be where most the film takes place, but this is sadly left to fade into the background. There are a fair few murders on screen, but these are brief, and a chunk of them even take the form of a montage. To begin with the character of Tony felt suitably cold and calculating, but then there is a strange shift in which the students begin to idolise him, especially Martin. There didn't seem to be a realistic reason for the change in these students attitudes. There is no sense of remorse or guilt at witnessing the killers crimes from the group, except for Ashish. The characters were also not that well developed, Kartik (Kabir Chilwal) as an example had barely any lines until towards the films climax. The character of Tony also took more of a back seat, with him hardly figuring in the present day sections. There was no real sense of threat from this guy.

I was impressed with the quality of the camera work and music choices, it is all dramatic and suspenseful enough. I also felt that the look of the actors, if not the roles they performed worked well. The corrupt police officers had the right feeling of 'good cop, bad cop' to them. The focus was more on this corruptness of the police than of the murders themselves. The victims have even less time given to them. Aside from a scene in which a woman is set alight for adultery there is no explanation given for why the people are being killed, there is no showing of the ramifications of these acts. There is a little bit of blood every now and again, but it is cursory, to illustrate the violence, rather than to be there for entertainment purposes.

To begin with there was a strong feeling of The Usual Suspects to the movie, I had all sorts of thoughts in my mind as to what could actually be going on. The reveals were never surprising, this went in a far more predictable direction than what I had hoped for. It leads up to a third act that really brought the film down for me. It was overblown, melodramatic, and played out so clean and neatly that it felt like I was watching a power fantasy dream of one of the characters rather than actual events. Real life is never so clean cut, so seeing that here took me out of the experience a little bit. This was in Hindi with English subtitles, aside from the odd word here and there that was spelled slightly wrong, or had the wrong word used, these subtitles were pretty decent and were one of the better parts of Tony.

Being a horror focused blog I had hoped that Tony would have more horror to it. Despite the subject matter this was far more of a drama, with thriller elements to it. It doesn't describe itself as a horror, so it isn't fair to bring it down due to that. However, the story got so over the top dramatic that I just felt my enjoyment slipping away as it went on. At nearly two hours long I also felt it was stretched out a little thinly, with a tighter paced movie this might have benefitted, as it was things just seemed to wrap up all a little too neatly and unsatisfactorily. Tony is being released in North America thanks to Bayview Entertainment, it should be available digitally and on DVD through Amazon. TMAA Releasing will be releasing it outside of North America digitally.

Posted by Daniel Simmonds at 15:30