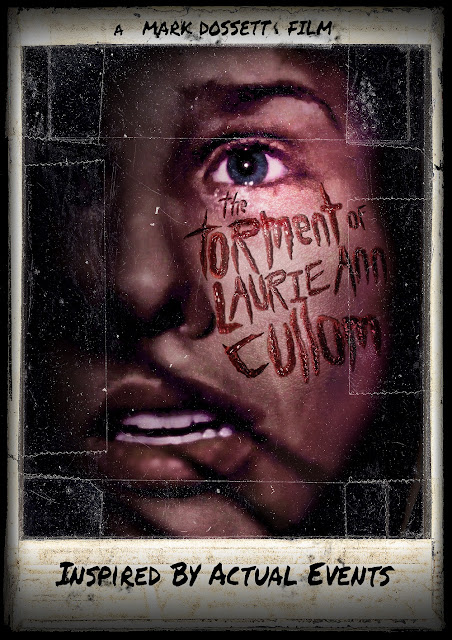 The Torment of Laurie Ann Cullom is a throwback eighties slasher style horror that was written and directed by Mark Dossett who also appears as an actor in not one, not two, but in four different on-screen roles. Again showing its indie roots is lead actress Shannon Scott, who herself appears in three different on-screen roles. These two also provided a lot of the voice overs within the film itself, and did a multitude of production jobs that include among them script supervisor, set design, graphic designer and stunt coordinator.

After a traumatic incident in the past, Laurie Ann Cullom (Scott) suffers extreme agoraphobia and is unable to leave her house. It is now 1988, and her mother has gone away on a business trip, so she is left alone for a few days. Strange things start occuring around the house as the days pass, doors are found open when before they had been closed, objects subtly move, and soon Laurie begins to fear there is someone in the house with her. Meanwhile, Sheriff Parks (Dossett)  gets some progress on his search for a local girl reported missing in the area. 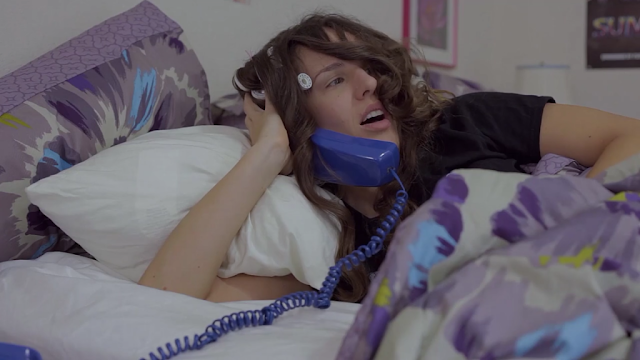 Apparently this was inspired by real events, but that is a dime a dozen nowadays. More interesting was how this starts, a screen of text saying that the movie is a recreation of the last 72 hours of Laurie, a series of events that the text says has turned into something of an urban legend. What this film does do right is everything involving the titular woman. Agoraphobia is the perfect excuse for why the character doesn't just flee the house at the first sign of danger. I liked how at the films start her house is her safe space, the outside world is scary and full of peril, but she is happy and content in her own little world. This gradual build up over the films first 45 minutes inverts this with it becoming clear to the girl that what she believed to be true has been turned on its head. At times (excluding the subplot), from musical beats, to the decisions made this felt like Halloween if the entire film had been laser focussed on one victim. Ideas such as not showing the antagonist until the films third act, even the way the killer moves around are shout outs to eighties slashers. The way the killer cocks their head to the side at one point in particular made me think of Michael Myers.

With the intro text seeming to make it clear Laurie would not survive, and with the promise of a 72 hour time frame I did expect more to happen before that dramatic third act. By keeping the reveal of the antagonist hidden completely, and not having read any blurb about this I began to wonder if what was happening was all in Laurie's head, or if there was even a supernatural explanation. As a character she did seem to get inexplicably panicked about the most minor of these odd occurrences. The subplot involving the sheriff featured a few throwaway scenes that didn't really feel like they added anything, but I did like the actual character of Parks. More strange was the way they go about hiding the fact that actors play multiple roles. The camera often centres on characters legs, or in the case of the mechanic his back. Three of Dossett's roles worked well, but I did feel the comedy character of the dirty mechanic didn't fit in to the film as well, nor did the character Becky (also Scott) who was a walking talking eighties stereotype who came across as far too exaggerated. 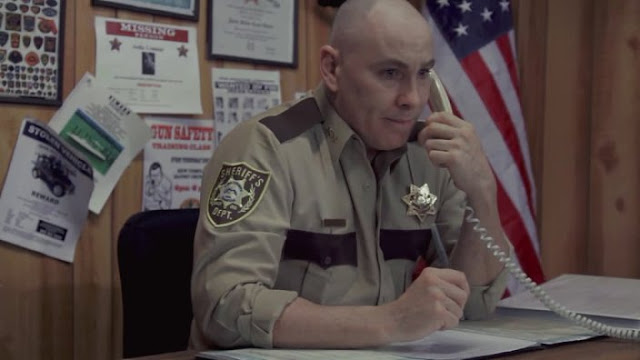 When The Torment gets going it also improves a lot. I especially liked a scene where a record is playing, the actions on screen match the music going on, including when the record gets stuck, each thuds of the record matches up with a camera angle change. A cheerfully happy song playing against the horror of a home invasion was a lovely juxtaposition, by far the best sequence of the film. The later darkness here works perfectly for the killer. The killer had a presence that felt similar to Kane Hodder's Jason, he always looked an intimidating force. It leads up to plenty of blood, much more than I expected, with some effects that made my skin crawl in a moderately similar way to a memorable scene from Revenge.

There is a lot here that shows the indie roots of this horror but it all comes together in the end. Maybe this takes a little bit too long to get going, but it features a likeable and rootable protagonist, an effective antagonist and just a dash of eighties nastiness. The Torment of Laurie Ann Cullom debuted on digital platforms on 2nd March, with the release spanning several months. Platforms hosting the film include Prime Video, Tubi TV, Google Play and others, all thanks to Terror Films.