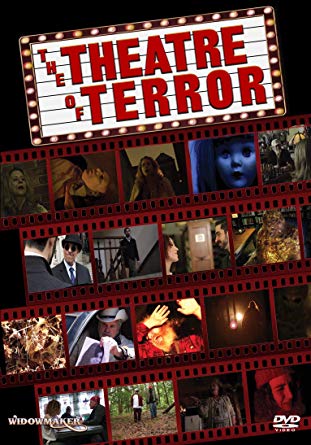 Whenever I review an anthology I say this, but here goes again; boy do I like anthology movies, there is always something new just around the corner when watching them. The Theatre of Terror is an anthology that was directed and written by Tom Ryan. It contains within it four different short films, each of which was also directed and co-written by Ryan. Rather than be created specially for this, each of the shorts was a previously released stand alone short that was brought together, there isn't really a theme, though I guess you could say the theme is New Jersey, as each of them was filmed there.

After finding a flier that talked about requesting help to keep an old theatre running, Amber (Lauren Renahan (Pretty Fine Things) heads there to give her assistance. Inside the building she encounters a strange man (Ryan) who tells her the theatre has closed down now, but that he is more than happy to give her a tour before she leaves. In the main room he starts to tell her stories of four different people who once frequented the place. This part makes up the wraparound story; The Theatre of Terror. The story here didn't really go anywhere, aside from the introduction this is more a vehicle for each of the shorts to be introduced, there are environmental hints that lead up to the beginning of each of the shorts. 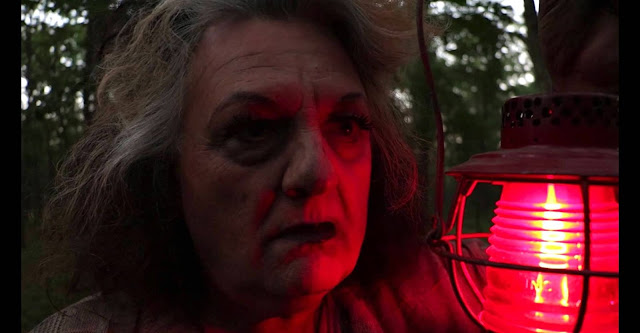 The first one is The Gift. Here, a prostitute (played by Heather Brittain O'Scanlon) ends up in a antique shop while on the run from an accidental death she caused. The shopkeeper sensing her anguish gets the woman to recount the events that led up to her situation, promising he will be able to give her a gift that will give her what she wants most. Most of this short plays out as a flashback, showing how the lady came to be a street worker. The horror part comes towards the end, with the old adage of being careful what you wish for. What happens here is coincidentally similar to a short story in the Black Mirror episode 'Black Museum', obviously that had a much bigger budget and so was able to explore the idea further. While this was one of the better shorts here I did feel it took a bit too long to get to the really interesting part, it felt like it was stuck at the end with no real time to develop the idea. I did like the design of a creepy doll and what was done with it though, that part was a highlight.

Next up is The Bookworm which was based on a short story. A book enthusiast (Scott Gorbach) buys an old library with the intent of shutting himself away from the world to read (not a bad idea in current times!). However once there he not only keeps meeting a mysterious woman (Sarah Schoofs), but also keeps finding strange mucus everywhere. The idea behind this was one I thought was decent, but this felt like it never really went anywhere. Despite the short length it felt slow, with not much happening. It had some good creature designs and effects but again, it felt the core horror element of this one wasn't explored too deeply.

The third film, Abducted, switches out the genre for something that is more sci-fi, as can be told straight away from the retro eighties computer text style title card. In this one a redneck (Russ Hackett) learns of the disappearance of several people in the woods near where he lives. Out one evening he discovers strange flashing lights, with it seeming aliens have landed in the area. A traditional story of alien abduction gets turned on its head a bit with this one. Again this one dragged a little, especially in the middle, but I did enjoy how it all ended. The alien costume wasn't the best looking, but this was got around by some nice lighting and fog effects.

Finally is Endangered that has a bunch of animal welfare activists heading to a forest in order to protect the wolves living there from hunters. One of the main characters in this one is Amber who also featured in the wraparound segment, I found that interesting. This felt like it fitted best in the anthology format mainly due to a news report at the shorts start that features a ticker tape running along the bottom of the screen that references characters and places from the previous shorts. I think this was my favourite one, the story was again relatively simple but it was entertaining, and I thought having everything lit in red for the finale worked wonders, it not only disguised the fact the monster costume wasn't stunning to see (though it wasn't bad), but it also added a lot of atmosphere, and a sense of a nightmare to what was unfolding.

I can't say that The Theatre of Terror was the best anthology I have seen in recent years, but there wasn't a terrible short here, at worst they were average. Being stand alone, or being longer than they were this might have been an issue, but as I cannot stop saying when it comes to these types of films; even if I'm not really enjoying the short I am currently watching there may be something better just around the corner. The Theatre of Terror is out now on DVD, thanks to BayView Entertainment.

Posted by Daniel Simmonds at 10:06