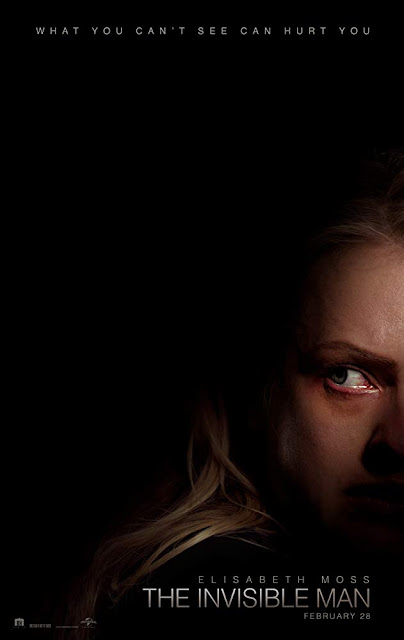 The idea of someone who is invisible to the naked eye has never been one that I have found too compelling, over the years there have been numerous attempts to bring this to the screen, from Universal's The Invisible Man to the Kevin Bacon fronted Hollow Man, and all the way up to the near present with Unseen. Of course effects have gotten better, but that is only one of the reasons why I think Leigh Whannell's (actor, and director of Insidious: Chapter 3) The Invisible Man succeeds. It is also down to making the titular man into someone far more evil than misguided.

Cecilia (Elisabeth Moss - The Handmaid's Tale) begins the film by fleeing from the home of her abusive and controlling boyfriend Adrian (Oliver Jackson-Cohen - The Haunting of Hill House) in the middle of the night, much to his fury. While staying at the home of a friend of her sisters; cop James (Aldis Hodge - Black Mirror episode 'Black Museum') she receives a letter stating that Adrian has killed himself. The letter also states that she has been left a large amount of money from him. While she initially doesn't believe Adrian would ever commit suicide a lot of the fear she has had since leaving him begins to subside. That is until a series of strange events occur that lead her to believe that not only is Adrian not dead, but that he has somehow found a way to make himself invisible in order to torment her. To everyone else around her though it seems Cecilia is losing her mind. 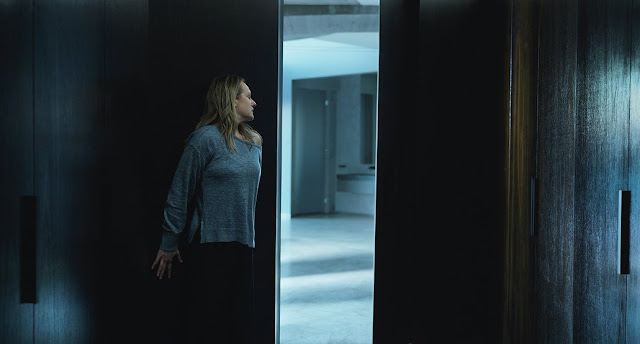 This might sound a tad sad but I have been trying to get around to watching the Sonic the Hedgehog movie for some weeks now (I was a huge fan of the games as a teen!), but every week at the moment a new horror is coming to the cinema. Because of this, and because I have never seen a decent movie about an invisible man I was not that excited for this one, especially learning it was over two hours long. I was happily surprised then to see how much fun this was. Usually the invisible to see fella himself would be the focus, with his discovery of invisibility taking up the first act, here though this is all done behind the scenes, it is up to Cecilia to work out what is happening. By doing this Adrian is turned into much more of a sinister antagonist, and in terms of suspense and horror this felt like a twin to supernatural films such as Insidious and Paranormal Activity in the way objects are moving around on their own. Making the viewer aware he is in the same room as Cecilia but keeping him unseen created so much tension throughout many scenes.

The first half was the more uncomfortable to watch due to how Adrian is messing with Cecilia, such as sending nasty emails from her computer, and punching James's teen sister (Sydney, played by Storm Reid). His many actions lead up to her being isolated from her friends and family, and appearing to the rest of the world as a mad woman. Moss is fantastic in the lead role, her descent into near madness, and her fragile mind shown well on screen. She has so many awkward scenes where I almost didn't want to watch due to how much it was making me cringe. Supporting roles were also well acted, especially liked the character of Tom (Michael Dorman - Daybreakers, Triangle) who plays Adrian's lawyer brother. The third act of the movie turns into far more of a physical horror, this starting with a scene in a restaurant that shocked in how swiftly things changed. The final section of this movie is a thrill ride with far more blood and violence than I expected, it was very enjoyable to watch and made this ominous figure into a good movie monster. 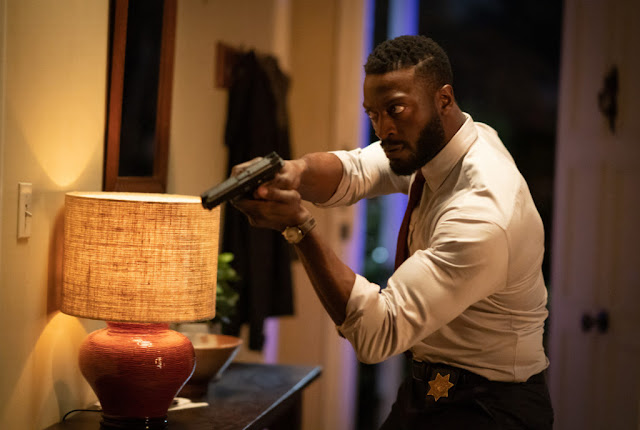 Coupling an abusive ex-partner with an invisible man is a perfect match. Even before Adrian turns up Cecilia is living in his shadow, jumping at every noise she hears, terrified he will appear again. So having him as a literal presence, rather than a psychological one was a great idea. The story has its fair share of twists and turns and while I liked it there were some moments that didn't quite land. A few times you just have to accept what the film shows you without thinking too hard about it as it raises some questions. The special effects here are nice, I liked the idea behind how the invisible man is invisible, and despite Cecilia often being the only person on screen during his attacks it seems believable rather than an actor just flinging themselves around a room.

The Invisible Man was a much better film than I imagined it to be. It ramps up from a psychological thriller into something much more physical, with the necessary effects used to get the job done. With a great cast, and a tale that fits into the world this side of #metoo this was a movie that finally makes the premise of an invisible man into a scary one.