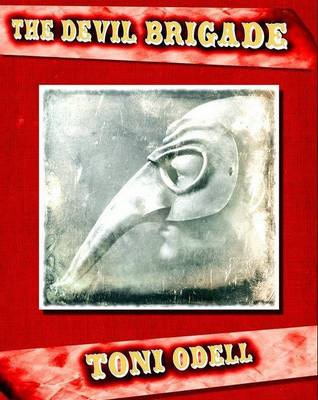 My digital pile of eBooks sent to me for review are an eternal fountain of shame, so it is always nice to finally get around to reading more of them. Toni Odell's The Devil Brigade I recieved way back in 2013, that sweet time of pre-apocalypse. This is a novella, and was the first in a planned series of books I believe. As such it serves as a kind of prologue to a much larger story.

It is the 1890's and Ringmaster Tom journeys around the back towns of America with his travelling freak show. His star attractions include twin little people, a mute wolfman, an obese man, and Ben, who Tom touts as 'Bubonic Boy: Black Death - Alive!' It turns out that Tom, at some point in the past made a Devil of a deal to fund his freak show ambitions, but now, his debtor has returned to ensure Tom keeps up his side of the bargain.

The aim of this novella seemed to be to get various characters to the certain places and roles they needed to be for the next installment of the series, a Phantom Menace if you will. Ben is the protagonist here, and it is a chance encounter with a mysterious young woman that starts off his story proper. The majority of The Devil Brigade takes place at the carnival and campgrounds the show are currently placed at. Tom is soon shown to be a nasty character, ruling his charges by physical and verbal abuse. His actions are eclipsed by a much larger in scope terror. A few scenes are set at the headquarters of this larger adversary, without going into details these parts had the more memorable moments of horror.

The plot initially appeared to be one thing, but then something happens at the start of the third act that really gets the story running. It all ends a bit abruptly with a lot of story threads hanging loose which cements the fact this was designed as a springboard rather than being a totally self contained tale. This can most keenly be witnessed with the character of Michael, he gets several chapters to himself, with what happens in them seemingly unrelated to the main story, at least to begin with, even though there is never any crossover.

The Devil Brigade was an easy book to read, and became quite descriptive when it wanted to be. While the story on its own felt a little incomplete it did set up the hints of a much larger 'good vs evil' story where both sides had grey areas to their ideologies. The Devil Brigade can be found at various sites, including Amazon.

Posted by Daniel Simmonds at 05:02