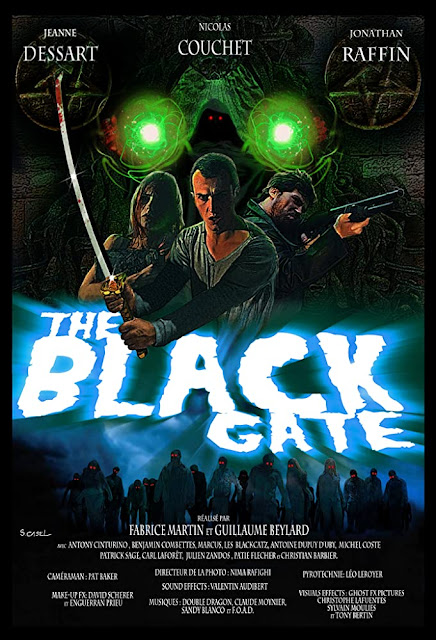 The Black Gate is a French horror film that was co-directed by Guillaume Beylard and Fabrice Martin, with Martin also writing this. It feels modern in how it was created due to the use of CG, yet the feel of this movie was straight out of the classic era in the eighties of Italian horror, especially the works of Lucio Fulci (Zombi 2, City of the Living Dead). That of course is no bad thing at all.

Estranged siblings, David (Nicholas Couchet in his sole film role) and Sarah (Jeanne Dessart) meet up after many years apart. As a child Sarah saw her parents murdered in bizarre circumstances, and she is pretty sure their uncle will be able to shed more light on what exactly happened. Together they decide to visit him to finally get some answers. Meanwhile, three men on the run after a bank robbery find their getaway vehicle breaking down in a remote French village. After they come under attack from seemingly invincible robed figures they flee for the safety of a nearby house, which just happens to be where David and Sarah's uncle lives. 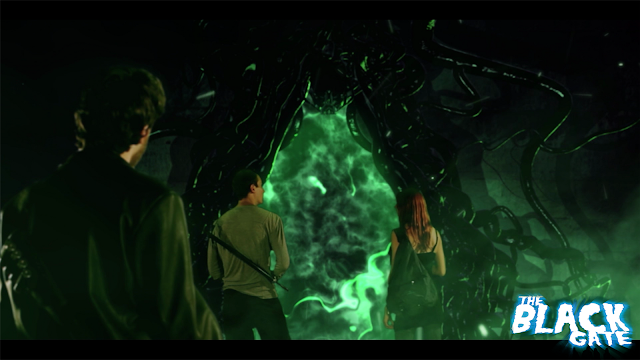 The Black Gate brings with it a feeling of unapologetic insanity, I got the feeling watching this that anything could happen, and it frequently does. The prologue wasn't that good and I worried I would be in for a dull ride. This then goes into the story proper and despite a barebones plot I found myself hooked. This is an indie film, and it brings with it a whole lot of sterile looking CG shots that always seemed too clean and artificial to fit into the film very well. This did bring with it a certain charm though. Magical effects, gun blasts, and even a decapitation all use CG to various degrees of success. Thankfully CG isn't used for everything, there are plenty of great looking zombies here that more than anything reminded me of Italian zombies of the eighties. The way these creatures walk, the way they look, and the make-up effects was all so cool and nostalgic.

There is a constant dream like feel with this film, of something not quite right. Sometimes this is literal with some early nightmare sequences Sarah has of an evil doppelganger of herself. Sometimes this comes from the imagery, such as a corpse nailed to a church's crucifix, and the CG landscapes of the demon dimension from which the robed figures are invading our world. The robed figures are a good threat, especially with the way they can phase through walls, meaning a traditional siege type situation is resolved swiftly due to walls and doors not being much of an obstacle. Later on there are a couple of action packed fight scenes. These are edited in such a way that gun impacts are off camera, but suggestive with the way they are edited in. A highlight was when a character jams a shotgun all the way through a zombie so that the barrel is then sticking out its back, and then shoots the gun to take out a different ghoul behind it! There were also a few effects of people getting their still beating hearts ripped out their chests, never a bad thing. 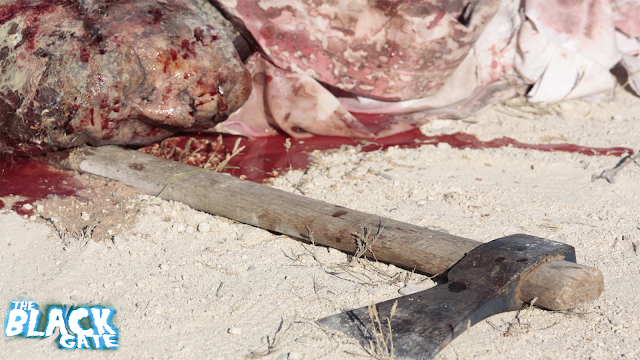 This is all in French with subtitles, there isn't a load of dialogue but it is all important in terms of the story. There is a H.P Lovecraft style horror here with beings from another dimension invading our world through the titular black gate. The screener I had featured some darn awful subtitles, mostly this wasn't an issue having to rearrange the subtitles in your head to make sense of them, but by the end it was getting exhausting to do this. Thankfully despite all the talk of magical tomes and supernatural horror the story was easy to follow. The main trio of David, Sarah, and Jeff (Jonathan Raffin) had little to their characters, but due to the fast pace there isn't any downtime with them, instead they react to events occurring. The soundtrack, much like the visual style of this was spot on, again giving heavy memories of the likes of Goblin and other synth based soundtracks of years gone by. That is except for the generic rock music that starts up each time one of the bigger fights begins.

After a bit of a rough start The Black Gate soon got into the swing of things. The story is nonsensical at times, yet there is such an urgent energy throughout this that it really doesn't matter. The characters are flung from one crazy encounter to another, with a lot of variation with what they encounter. From robed demons, to evil mirror creatures, alternate dimensions, zombie hordes, and black magic this film fits in a lot to stop things getting stale. Might not be the best made film in the world, but boy did I find it entertaining. The Black Gate is being released digitally and on DVD through Amazon by Bayview Entertainment in North America, and is also available here.