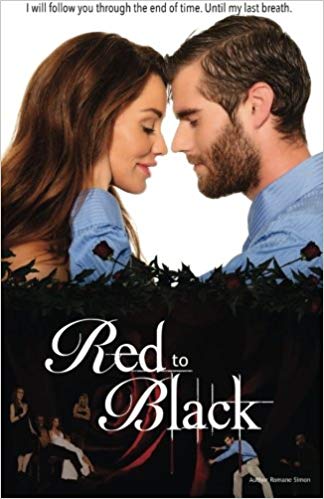 Red to Black is a vampire story based on a screenplay by author/director Romane Simon (Blood Runs Thick, Hybristophilia). Rather than tell a far reaching large tale this novel instead takes an up-close look at a small family of vampires, and the various struggles these characters face in their average day to day life.

Xavier Gains is a vampire who is nearly 1000 years old, he lives in a converted building with his sister Daniella, and his cousin Barry, who are obviously also blood suckers. Mainly taking place in modern day Los Angeles this initially follows Xavier who has fallen in love with a woman named Marisa, and after revealing who he really is has invited her, of her own free will to live with him. This romantic story has hurdles in the way though, especially in the form of small time reporter Douglas who is none too happy that Xavier has stolen away his wife. He has created a band of vampire hunters in order to exterminate Xavier and his kind with the hopes of winning back his wife's heart.

While this was initially very much about Xavier his character kind of fades to the wayside by the time the main meat of the plot appears. While there is the obvious supernatural aspect to Red to Black the plot itself felt something much more grounded in normal drama (again, I mean outside of all the horror parts). Boiling it down this story is about trying to find true love, with many of the characters motivations stemming from not wanting to be alone in the world. At times this felt as shallow as an episode of Friends, but there is also elements to this that felt like they were out of a Shakespearean tragedy. Despite Xavier being the catalyst for much of what happens he gets relegated to a back seat role with him personally never really in any peril. He is very much the protagonist of the story but I felt his more sadistic nature didn't make for a likeable lead. Sure Douglas is shown to be weak in character, yet Xavier's constant torturing of the poor guy made him into a character you could on some level identify with. His wife left him for a man who by his nature is better in every way, so he tries to get revenge on the pretence of wiping out vampires when in actuality his main problem is just with one of them.

Despite all the grounded drama of using and manipulating people, feelings of being slighted, and arrogance that is gained by being powerful there are moments of proper horror here which made for some of the more entertaining parts. A good example is when Barry tricks two victims into following him into an alley, I loved how this all played out. I also enjoyed the notion of different types of vampires rather than just the traditional kind, such as Xavier's followers who have hooked claws. The brief hunters vs vampire battle was also a highlight. With the protagonist being so old I had hoped there would be more of an Interview with the Vampire vibe of him talking about himself throughout history. Yet aside from when he is first turned this history is never explored that much. As a novel this was very easy reading, with a writing style that was simplistic in setting out its story. At 140 pages this was a quick and smooth read, telling its story in a way that covered a lot of ground without events feeling rushed.

Red to Black is a vampire story that focuses on the human element of existence as an undead blood sucker rather than anything that is full of bloodshed and violence. For me personally I preferred the few moments of horror here, the love triangle plot wasn't so involving to me. Red to Black can be found on Amazon if you want to check it out for yourself.

Posted by Daniel Simmonds at 05:35