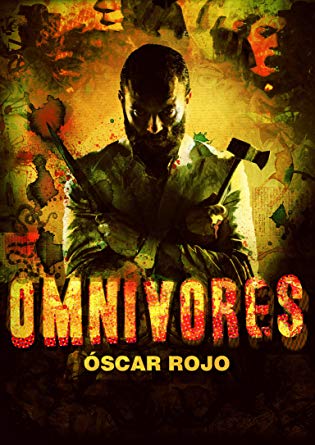 I have to get this out the way to begin with - the screener I received for review didn't have any subtitles, and as this was a Spanish horror that caused quite the problem for me. The sole word I know of Spanish is 'si' so that didn't really get me too far. I could have simply not reviewed this, I could have also asked for a screener with subtitles, but as I had scheduled in this movie for review anyways I decided to press ahead. As it is this wasn't the first film I have reviewed in which I didn't really know what was going on, that would be Turkish horror Baskin,which at least had a lot going on visually. Needless to say, take this review with this information in mind as I'm sure if it had been understandable it would have at least a single point higher rating.

This story is put together from my understanding of the film. After a boy's mother dies he is left with no choice but to consume her in order to not starve to death, eventually he is discovered and rescued by someone else. This child either grew up to be a wealthy businessman, or he grew up to be a butcher (I'm not sure which). In present day the wealthy businessman offers his rich clients a delicacy that is very hard to find, and also quite illegal. His butcher abducts people from off the streets and slices them up for food. A food critic (Mario de la Rosa - Hellboy, Terminator: Dark Fate) discovers all this and decides to check it out for himself, with the possible aim of secretly trying to find a way to stop it. 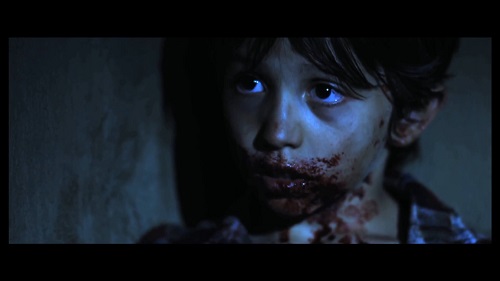 It doesn't take an understanding of the Spanish language to know this really wasn't my type of horror. Consumption of human flesh as a horror topic ranks up there with insects as one of my least favourite types of horror. In real life I really like meat, I often don't feel like a meal is a meal unless it contains some sort of meat. The idea of eating human flesh though is something repulsive, and so I felt queasy throughout Omnivores. This by default made me not like the film, I didn't enjoy the topic, and I was glad when it was all over. That is just me though, ignore that if it is the sort of thing that does appeal.

With Baskin I had a pretty good idea of what was happening despite the language barrier, there was plenty of action and excitement in it. Omnivores on the other hand is a very talky film, the first half especially has long scenes of characters talking to each other, with me having no idea what was going on. With subtitles you can kind of judge the acting even if it is spoken in a foreign tongue, here I can't really tell if the acting was any good or not. All I do know is there were a lot of dramatic deaths, and that if the food critic was pretending to be into human meat then he was doing a terrible job. The entirety of his infiltration he has an expression of pure disgust on his face, not even making an effort to try and fit in. 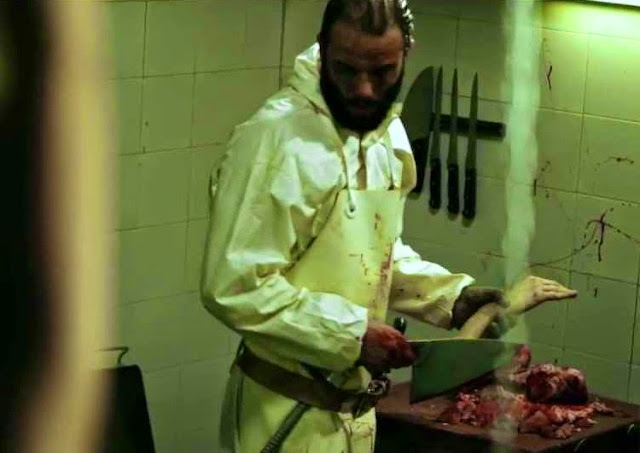 The second half became a lot simpler to understand, I was confident by the end I had got the general idea of the story. It is revealed by a series of flashbacks to a key scene in the movie, showing things that at the time were not shown to the viewer. Outside of all the grim dinner party scenes we often get to see the butcher as he abducts and abuses his victims. They generally end up naked and hung on a butchers hook, there was one decent enough scene where a victim manages to make a bid for freedom.This film includes full frontal male nudity, and some female nudity, but this is never sexulised except for one literal sex scene. The effects are fine, there is blood when there needs to be blood, and was one nice neck stab scene that had appropriate levels of claret flowing. This was filmed fine enough, but I didn't think the soundtrack was that good, it sounded a bit like something that would be made for TV.

If the idea behind Omnivores sounds appealing, and if you know Spanish, or get a version with subtitles then maybe this would be for you. It wasn't up my street though, and so I can't say I enjoyed it much. Omnivores can be brought on DVD from Amazon, thanks to BayView Entertainment.