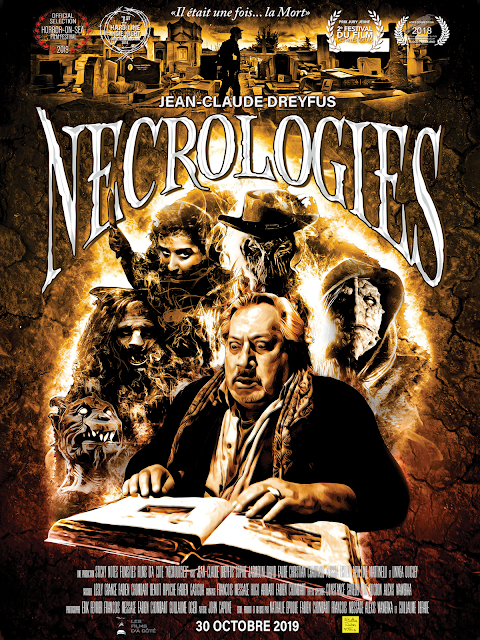 Anthologies are one of my favourite styles of horror films. I have said it so many times before, pretty much every single time I review one of them in fact, but it's a simple fact that having a variety of stories rather than just the one means even if some aren't great there is always something new and different not that far away. Despite the bland title, Nécrologies turned out to be something good, even the weakest of the short films here had something unique to offer at the very least.

Within the film there are five different stories, with a sixth one working as the wraparound. The set-up is that a horror vlogger has snuck into a graveyard at night in order to take some selfies. He gets caught however by the graveyard keeper (Jean-Claude Dreyfus - The City of Lost Children) who takes him to his hut. He tells the vlogger he is going to call the police to report him, but after learning the man is interested in horror he decides to tell him a series of bizarre and unsettling tales about how some of the many people buried in his graveyard came to meet their ends.

The first short is The Call of Death, that was written and directed by Nathalie Epoque. Here a woman who is home alone begins to get threatening calls on her phone from a man who seems to have an intimate knowledge of the woman's life. All the shorts within the movie are around ten to fifteen minutes long, and that really works for this one. There is the right sense of suspense here, and the length means to doesn't have time to become dragged out. The pay-off for this is absurd, but it wasn't something I at all saw coming, so this was a great start to the anthology.

Next up is The Beast, this was written and directed by Fabien Chombart. I really liked this one. Here, a man driving in his car sees a woman collapsed at the side of a large forest. He goes to investigate and ends up being hunted by the titular beast. I loved how this was planned out, there are so many questions to begin with, but as the great lead (played by David Faure) goes through his ordeal this is all naturally answered for the most part. Some good make-up and creature design, and some gory moments. This was suspenseful and thrilling right from the very start.

The third film is Return of the Lizardmen, directed and written by François Message. This was a found footage horror and was the weakest of the short films on offer here. A reporter and her cameraman boyfriend head to a secret duck worshipping cult who believe they must perform a ritual to stop lizard men from taking over the world. As you can tell from the synopsis this one was pretty out there. I liked the idea behind this but it didn't flow that well. There were too many random costumes and the events that happen came off as a bit staged and artificial. Still, the epilogue to this one put out an interesting idea at least.

The penultimate film is Alexis Wawerka's A Hell of a Bargain which is up there with The Beast for being the top film in this anthology. A land buyer arrives at the home of an elderly woman prepared to do anything it takes for her to sign her land over to him. However, he doesn't account for the lady's terrifying pet. I loved this one, it felt like Gremlins crossed with the supernatural, featured some entertaining puppetry, and some really crazy moments that were so inventive. Where this goes from the innocuous start was marvellous.

The final short is Guillaume Defare's The Eye of Taal. A struggling artist explains to a prospective buyer the inspiration behind her gothic pencil drawings, with her stories leading to mini shorts (shot in black and white) within the short itself. This had a good idea behind it, and at times a bit arthouse in style. I felt there wasn't really enough time to tell the story to a satisfying degree. I could really see this one working as a feature length film. I enjoyed it.

Usually with anthologies it is good enough to find one or two of the shorts are any good, with Nécrologies there wasn't a bad one among them, even the weakest had decent ideas behind it. There was plenty of variation, plenty of fun, and plenty of horror. This was nearly fantastic, but as it is, it isn't far off, very good indeed. Nécrologies is available worldwide here, later in the year SRS Cinema plans to release this on DVD and digital in North America, while Bounty Films will be releasing this digitally in Australia and New Zealand.