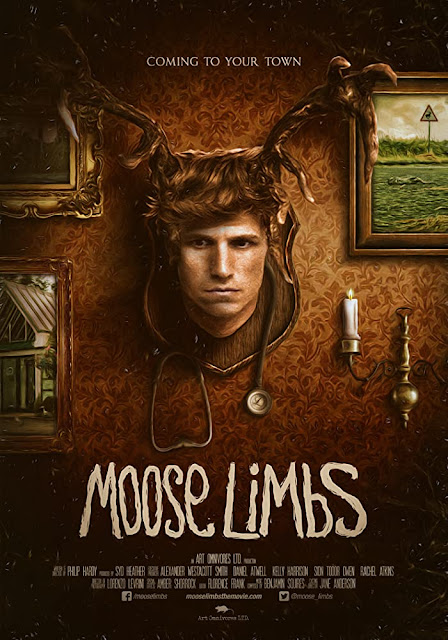 A few years back a friend from work recommended I check out a YouTube video titled The Blobby Witch Project. This was a found footage short horror film that in its three minute runtime managed to present a ridiculous situation (popular 90's TV mascot Mr. Blobby turned killer), yet still create genuine moments of horror with the idea. Earlier this year the creator of that video; Philip Hardy left a message saying I should check out some of his other short horror films he has made, and so I checked out 2017's surreal Moose Limbs.

Doctor Tom Beaumont (Daniel Attwell - 1917) has recently relocated to a rural English town with his wife, Sue (Kelly Harrison - The End of the F***ing World) where they find themselves treated badly by the locals. This is due to the fact that both of them are half-human, half-deer people and the country folk there are all into hunting. An incident occurs at the local pub (a place people used to go to drink alcohol) which may cause the locals to put aside their speciesism.

This short clocks in at just over fourteen minutes and is roughly in two halves. The first half introduces the doctor and it is clear to see the obvious contrast between these characters discriminated against due to what they are, and real world racism. Everything from graffiti scrawled on their car telling them to 'go home', to the very frosty reception they get at the pub, full of scowls and sideway glances. This works in showing how ridiculous that topic is. There was a Straw Dogs type vibe here that I liked, it is of course ridiculous to have half-man, half-deer creatures but this is handled in a way where it manages, like the Mr. Blobby film previously made to have layers of horror here. The tone of the music, and the way it is all filmed creates a sense of peril.

The second half felt like something different entirely, and if I was to give some criticism to Moose Limbs it would be that these two parts felt like they were different films entirely. The message of the first half is dropped to instead focus on a gruesome body horror section. This was well made, and chaotic, and I enjoyed it nearly as much as the first half.

Moose Limbs was something so much better made and put together than what I had seen of Hardy's work previously, I admit I was surprised by the quality here. It takes a surreal idea and normalises it, helped by Attwell's always straight faced performance, a zany one would have dragged the short down. The actors here, especially the main ones really made the idea here work. Check it out for yourself below.