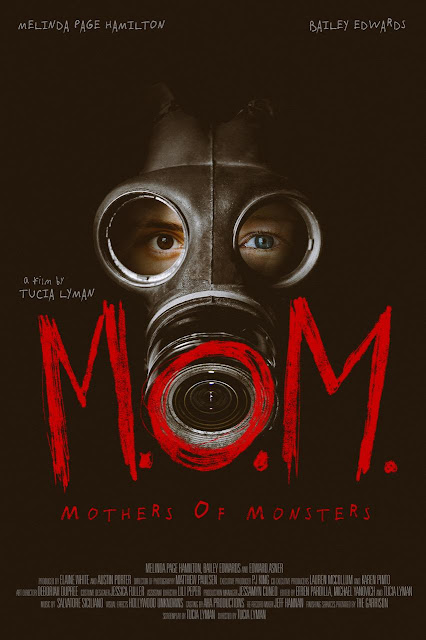 Nowadays it seems found footage horrors can either be quite good, or pretty dull, with there not seeming to be much that falls outside of those opposites. Tucia Lyman's feature length movie directorial debut M.O.M. (Mothers of Monsters) happily falls into the former. Maybe not happily as this film is short on light hearted moments. this uses the found footage format in a way that was unlike anything I can think of, at least in recent memory.

Melinda Page Hamilton (Grimm, iZombie, Ghost Whisperer) stars as Abbey, a 42 year old single mum who suspects her son, Jacob (Bailey Edwards - Bright) is a budding psychopath. In the past she had gone to the authorities with her suspicions but nothing had come of it. Now, knowing they won't believe her she has instead decided to secretly film Jacob, as well as vlog in the hopes that her footage can help any other mothers out there who also suspect there is something wrong with their child. However, it might possibly be that her son has discovered what she is doing... 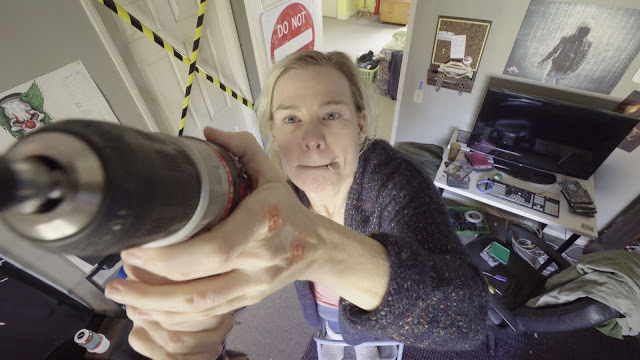 Anyone who has seen anything more than a handful of found footage horrors will know the general format. Typically there will be some text at the films start explaining how the footage came to be filmed and edited. Here, M.O.M. does something a little differently. The film plays out on a laptop screen, with an unseen person clicking on various movie files from a folder. At times these play out chronologically, at times they are more random. So there might be footage from when Jacob was a child, to then go to recordings from the camera Abbey has set up in the house, to then go to a personal video that Jacob has filmed while out with friends. There are a bunch of characters throughout, such as Abbey's mum, and Jacob's girlfriend, but the majority of this is just Abbey and her son.

With found footage it is essential that the actors play their roles realistically,  Hamilton in particular shone in this, which is handy as she has the most screen time. She not only narrates over scenes, but she also spends a large portion of the film talking into the camera. Edwards was also fine, but his portrayal of an angst ridden teen did fit into a character type seen plenty of times before. He had to flip between different roles, that of a normal teen around other people, and more of his real character type when he thinks he is alone. Especially towards the end he seemed to become much more of a scary character, helped by some of the bizarre antics he gets up to. Much of the movie is shown in such a fashion that you really don't know if there is actually anything wrong with Jacob, or if it is Abbey who is the one with the problems. A subplot of someone from her past having gone crazy leads to the suggestion that she is just seeing issues where there isn't any. 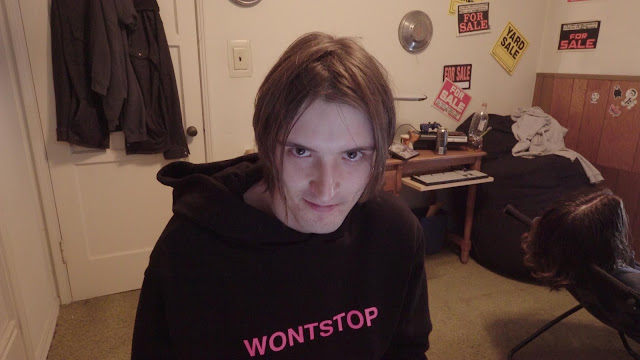 M.O.M. is split into two equal halves. Upto the halfway point I thought it wasn't bad, but I was beginning to feel slightly tired of the format. Then there is a revelation that occurs that not only changes up the pace, to make this into far more of a horror, but it also retroactively changes the first half in a drastic way. An inconspicuous noise that kept popping up is suddenly explained, giving greater meaning. Talking much at all of the second half would take this review into spoiler territory, needless to say things get a lot more interesting. This film follows the trend of a lot of films I have recently watched that have a good final shot. I liked how this was resolved. For anyone who does watch this, wait till after the credits as there is a short final scene that plays there. Much of the musical choices used here are utterly terrible angry songs. I really hated the music, but they were good choices, as that is the exact type of music I expect someone like Jacob would be listening to.

I was neutral going into M.O.M. as you can't really tell nowadays if a found footage is going to be any good or bad, it always depends on the actors. With a good cast, and an interesting way to frame the story this was something that felt more fresh than I expected. The subject matter is not a pleasant one, and this won't make you feel good, but it was a horror film that I enjoyed. M.O.M. (Mothers of Monsters) opens at the Arena Cinelounge in Los Angeles on 13th March, with a nationwide Digital HD rollout to follow.