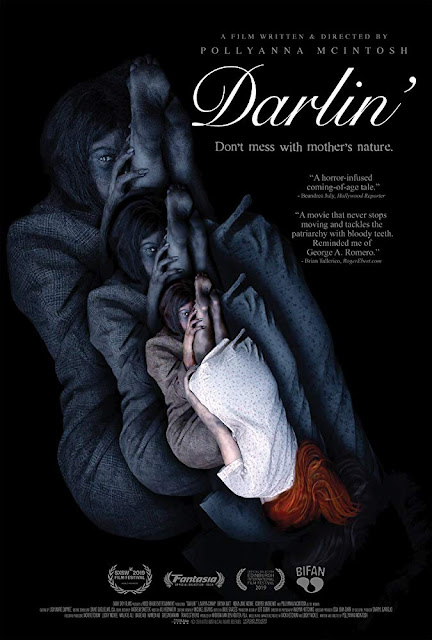 I discovered after having watched Darlin' that it was actually the third part in a trilogy about cannibal savages. First was 2009's Offspring which had a clan of cannibals out to kidnap a baby, and this was then followed up in 2011 with The Woman, in which the last member of the clan was captured by a sadistic lawyer who hoped to 'civilise' her. Darlin' obviously works as a stand alone horror as thinking back there were only a couple of moments that referenced past events, mainly this was a self contained film. It seems the only returning actor is Pollyanna McIntosh (The Walking Dead) who reprises her role as The Woman, and who this time around also directs in her directorial debut.

Feral teenager Darlin' (Lauryn Canny) is discovered at the doors of a Catholic hospital by nurse Tony (Cooper Andrews - The Walking Dead). The child is cleaned up and it is decided to send her to a Catholic school run by a sleazy bishop (Bryan Batt - Scream: The TV Series). With his school facing closure he hopes the publicity of a wild girl getting civilised and becoming a servant of God will save that from happening. However, the person who dropped off Darlin' at the hospital (McIntosh) is on a mission to find out what happened to her, and she will kill anyone who she sees as an obstacle to her goal... 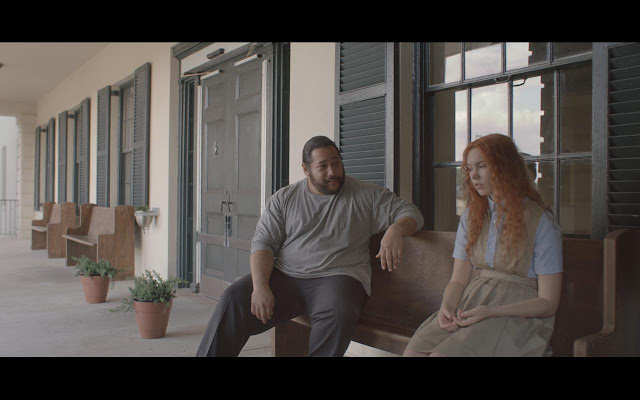 There were several different directions this movie could have gone in, but it kind of feels like it wanted to go in all of them at once. The main story about Darlin's rehabilitation into a normal member of society is the main part of this. There is a time jump of several months with the girl soon able to speak and read, and excited to 'have the devil' taken out of her. She lives with a bunch of other teenage girls and during her road to recovery she gets up to hijinks such as smoking pot and discovering music, but not much of horror occurs. The subplot features The Woman and is far more horror based. She acts like a movie monster, one scene as an example shows her on a rampage at the hospital. Along the way she racks up a body count, and eats her victims on occasion. Weirdly her rampage goes seemingly unnoticed. There is one scene where it appears the authorities are after her, but then this is abandoned with the later half of the film having her living with a group of oddball homeless people. Knowing this is a sequel it makes a lot more sense the films attempts to humanise her, but there is a weird disconnect between The Woman's murderous tendencies where many of her victims are complete innocents, and the moments where she is made out to be a good person, if misguided. The most disonate moment with her path through the film comes in a scene where Tony is driving her, with her crazed reactions at not knowing what a car is played out as a little comedy skit. This coming off the back of her rampage just felt odd.

Many of the characters here felt undeveloped, with many, such as the girls at the catholic school having nothing really to them. Even the nun who befriends Darlin' and who has a few scenes with her as the main focus doesn't really come across as that interesting a character. The same can be said for Tony. At first it appears he will be the protagonist here, but then he disappears for large chunks of the story, only popping back up every now and again, and really adding nothing at all to the story. I like Andrews, he is a good actor, I wish they had used him more. Batt was the perfect choice for the bishop, I liked how much of a slimeball he appears to be even before the plot advances to a point where this becomes legitimised. As for Canny, she is fine in her role, but having a protagonist who barely speaks means she always remained a bit of an enigma. Her backstory is shown via jumbled flashbacks, I don't know if these play into the previous films or not (there was a character named Darlin' in one of the previous movies, though played by a different actress).

The soundtrack is split between typical teenage coming of age hipster like songs, and the more traditional horror based soundtrack. The scenes of horror feature some decent looking special effects, such as a throat getting slashed, and the make-up on the feral characters always looked good. Also, the cannibal parts really reminded me of zombie attacks, so of course I loved those. I enjoyed the horror subplot a lot more than the main one so it would have been nice for more of that. By the end of the movie there is a good argument over who the real bad guy actually is, the misguided slasher, or a man presenting himself as an agent of God, but who has a very dubious moral character to himself. It leads up to a finale that was in a way satisfying, but also a bit open ended, the film cuts to credits before anything is really resolved.

Darlin' wasn't a bad film, but it also didn't feel that well tied up. Due to the mostly silent protagonist her motivations sometimes seemed a bit random, and the large amount of side characters sometimes felt like they were getting in the way of the core story. Still, there were moments here that stood out, but it wasn't one I would say I loved. Darlin' is out on 16th March thanks to High Fliers Films.