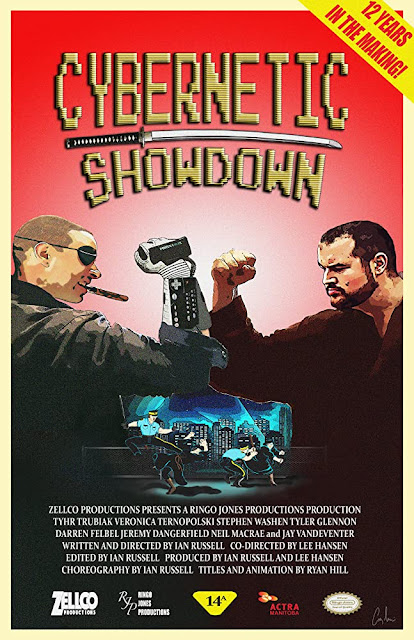 Cybernetic Showdown is the latest film from director, writer, editor, and producer, Ian Russell. His previous film, 2008's The Killing Death was an unexpectedly funny crime drama that was full of terrible jokes, and dodgy CG. Cybernetic Showdown is even more ridiculous, and to my surprise, despite the different genre this turned out to actually be a sequel to that film.

This is a post apocalyptic movie in which all of  the world has been destroyed by some unknown disaster. The last bastion of civilisation exists in New Winnipeg, a walled city that is under constant threat of invading mutants.The cyborg Detective Inspector Sergeant Jimmy Hopper (Tyhr Trubiak reprising his role from The Killing Death) is all that stands between the inhabitants of this place and the mutated disciples of 'His Holiness' (Tyler Glennon). 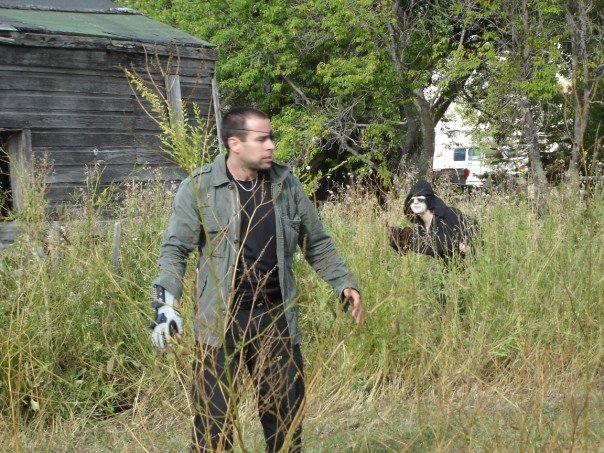 Throughout the movie I noticed a whole bunch of actors that worked on Russell's previous work. Due to this it took me longer to realise than I would like to admit that this was a sequel. Returning actors include Stephen Washen as the mayor, Neil Reimer (sadly reduced to a much more minor role), as well as a bunch who were, like Trubiak reprising their roles. Highlights being Caley Gibson, again playing a janitor who gets into a fun fight, and Jeremy Dangerfield as Frank, who was completely scene stealing despite technically only being there in audio form. It was just the one part with this character but he had the funniest and most witty dialogue of the movie, and had a fantastic new look. Before, Jimmy was the straight man to Frank's frequent nonsense, here he has changed to fill the main lead, and a lot of the film rests on his shoulders. With his eyepatch that he doesn't actually need, his ever present cigar, and his cybernetic enhancements, that seem to consist solely of a Nintendo Power Glove, this was a visually interesting character. He had a silly backstory, and his gruff and overly serious persona shone, but his way of talking in purposely tired cliches did feel a bit exhausting at times with the joke wearing a bit thin.

Trubiak was still a good lead, especially when it come to doing his own stunts in the frequent ridiculous fight scenes. With awful fake looking CG Cybernetic Showdown often felt like a videogame, and this is backed up by Scott Pilgrim VS the World style intros to his fights that feature a 'VS' screen. The fight sequences were better choreographed than I expected, with plenty of judo throws and over the top shenanigans, such as using ripped off limbs as weapons, and one part where Jimmy dragon punches a mutants head off, it flies out of the planet, eventually falling into the sun! At times the film entirely devolves into a video game, one part with Jimmy fighting his way to the police station played out in an 8 bit graphical style very reminiscent of River City Ransom. 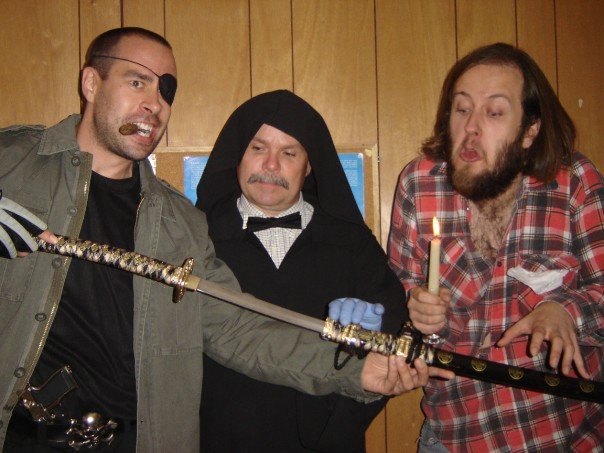 The special effects were wonderfully bad looking, this added to the low budget charm, which the exaggerated performances also helped with. I have to mention the soundtrack that was fantastic throughout, especially the trip hop style downbeat moments, I found myself bopping along a bit to those as I watched. Another well designed element was the editing, the intro credit sequence was one such example, a great way to start off the film. The plot itself was nothing special, but then this is filled with cliched characters for a reason. The humour really helped with this, it was funny, but never really to a degree that I laughed out loud (ok, once), and of course some bits didn't shine as well as others.

Despite the genre change the basic comedy elements remain the same, and due to that it was hard not to be charmed by Cybernetic Showdown. While the dialogue wasn't as funny as The Killing Death it did seem to be better made, the effects and editing in particular were highlights, it takes a special kind of skill to look this effortlessly bad. Finding out this was a sequel was another thing that I liked about this, was a nice surprise. While it is not the best comedy post apocalyptic movie out there (that would have to go to Manborg) this was still a fun movie all the way to the great epilogue. Cybernetic Showdown is available to stream on Amazon Prime Video and Streamlette, and a novelisation is also coming at some point in the future.