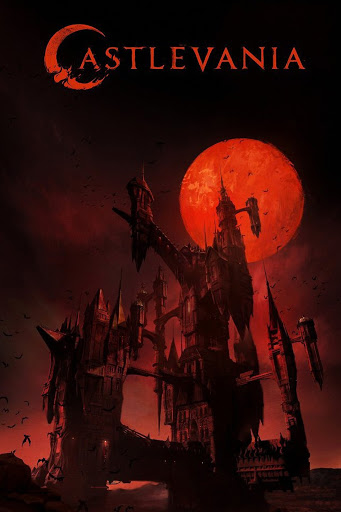 It was only when I noticed the upcoming release of season 3 of the Netflix show Castlevania that I felt propelled to getting around to watching the second season. The video game series of Castlevania is one of my all time favourites, it is horror based after all, and Castlevania: Symphony of the Night was one of the twins, along with Super Metroid that created the fantastic Metroidvania genre of platform games. One of my complaints of the first season was that it only contained four twenty minute episodes. This time around that episode count is doubled and episodes in general are closer to thirty minutes, so there is far more story being told. Spoilers for the first season are bound to follow, so if you have yet to see that then pop off and return here in approximately 80 minutes.

The vampire hunter Trevor Belmont (voiced by Richard Armitage - The Hobbit trilogy), magic user Sypha Belnades (Alejandra Reynoso), and half vampire Alucard (James Callis - Battlestar Galactica) have pledged to rid the land of Dracula (Graham McTavish - The Hobbit trilogy). Together they head to the Belmont family home where lies centuries of knowledge with how to battle vampires.
Meanwhile, Dracula is hell bent on wiping humans from the face of the Earth in retaliation for the murder of his human wife. In charge of his armies are two human forgemasters, Hector (Theo James - the Divergent trilogy), and Isaac (Adetokumboh M'Cormack - Lost). His vampire lieutenants led by Camilla (Jaime Murray - Gotham) however start to plan against him as they see it suicide to completely wipe out their primary food source. 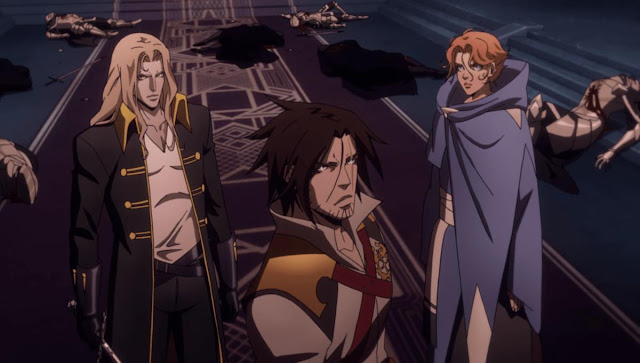 I expected that the action would really ramp up for this new season, I imagined there would be the heroes fighting their way across the demon infested lands in search of Castlevania. How wrong I was, however despite six of the eight episodes being more plot heavy than action orientated I loved this. The heroes spend nearly the entire season sat around in a basement researching, while the antagonists spend most their time getting up to intrigue and plots at Castlevania. A smaller complaint of the first season was that we see Dracula's commanders, yet I don't believe they actually got any speaking roles. This time around there is a lot of character development, especially around Hector and Isaac who were both great characters, and via flashbacks are shown just why Dracula saw them as needed. Even with quite a few of the high up vampires getting fleshed out there were still a few who didn't get any speaking lines despite being well designed. In particular, a vampire wearing a turban was one character I really wish had got to be an actual character as he looked cool.

This remains as adult as ever with characters ready to swear at the drop of a hat. The violence hasn't abated either with some really quite nasty looking moments that I loved. As well as stakings, decapitations, and mutilations you also get such highlights as the flesh being flayed off a characters head, and a great looking flashback sequence of Dracula going against a town of frightened villagers. The animation is a high quality, and the level of detail, and the level of easter eggs hidden throughout are delightful. The River was perhaps the most largest episode in terms of action going on, and it felt like the animation suffered a bit during this, but it pulls itself back together for the penultimate episode - For Love, which had such exciting fight sequences that I just could not look away. The music throughout is original ones created for the show, it is all gothic and fitting, but when a remix of a classic Castlevania tune from the video games appears I was grinning from ear to ear. That series really does have some of the greatest video game music of all time. 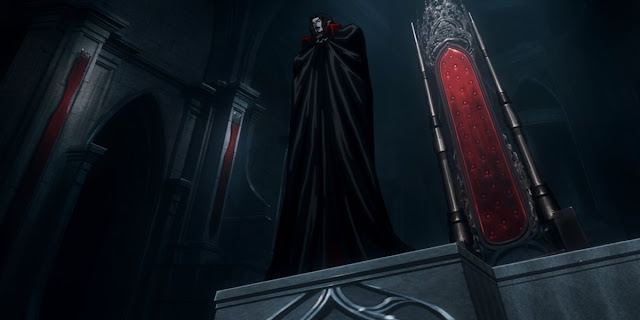 The acting is strong from all the voice actors, there wasn't anyone who sounded out of place. My continuing issue with the portrayal of Belmont continued, I found him still to be really quite unlikeable, though least other characters point this out on occasion. Dracula was the most interesting character here, I love how this show goes some way to humanising him, the final fight in particular became unexpectedly moving. The relationship between Alucard and Dracula is only looked into towards the seasons end but it really got me in the feels. Fan service includes expected moments such as a whole host of characters and monsters from the games appearing (even a portrait of Leon Belmont from Castlevania: Lament of Innocence!), to magic spells characters use, and even the floating shape from the save room in Symphony of the Night is utilised. It was a joy seeing all these little fan inserts, they added a lot for me. To go a bit geeky, the decision to make Castlevania just a castle (albeit one powered by magical means), rather than being a manifestation of chaos wasn't what I would have gone with, but the castle really becomes a key part of the story in this season, the ability for it to teleport was used to fantastic effect. Also, to continue this little geek out, I would have loved Death to be an integral character here like he is in the games.

My main complaint of this show was fixed due to the episode count being higher, and so this season was much better. It wasn't what I expected, but using the extra time to focus on character development was a wonderful idea, as was the idea to have around half the show centered on the bad guys, to destroy the risk of making them seem one dimensional. With season three now out on Netflix I am going to go straight onto that, I hope the momentum of this beautiful and violent series continues.