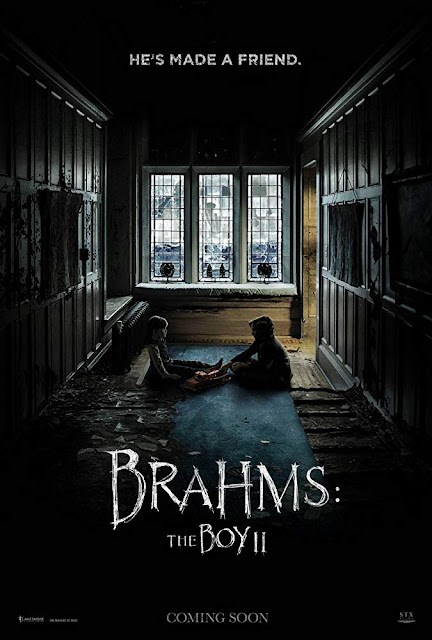 To say I was not looking forward to seeing Brahms: The Boy II would be an understatement. My review of The Boy is only one of three I have written where I have received a copyright claim on the images I used in the review. Coincidentally this has only ever occured when a big budget horror has received a middling score from me. Needless to say I wasn't that excited to see the sequel, time will tell if this also gets flagged. I saw the film last night (at the time of writing), with plans to write the review first thing in the morning. It's not really a good start to say I completely forgot I had even seen it until quite some time after waking up.

Liza (Katie Holmes - Batman Begins, Miss Meadows) was home alone with her young son Jude (Christopher Convery - Stranger Things, Gotham) in their London apartment one night when some burglars break in. During the intrusion Liza ends up getting knocked out by them. Fast forward half a year or so and Liza is still terrible PTSD, with frequent nightmares and hallucinations. Jude is faring even worse, having not spoken at all since the incident. Liza's husband, Sean (Owain Yeoman - The Belko Experiment) decides an extended vacation to the countryside will do them the world of good. They decide to stay at a cottage on the outskirts of a huge mansion, and it is while exploring the nearby woods that Jude discovers a doll buried in the dirt, and indicates he wants to keep it. Soon, he has named the creepy doll 'Brahms'. His parents at first think it is good that he has found a companion, but soon things start to take a darker turn when Jude starts acting more aggressive, and a series of strange events occur that he blames on the doll. Is something wrong with the boy, or is there really something sinister about Brahms? 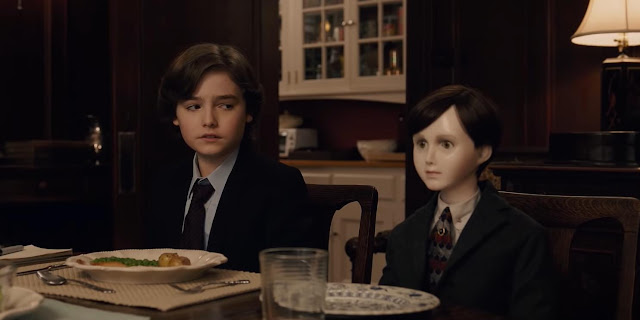 I have to say I thought Brahms: The Boy II was a lot better than the first movie, even if it does retcon some stuff. Spoilers for the first movie, but it is revealed at the end of that one that the doll is just a doll. Instead the real Brahms was a disfigured madman living within the walls of the mansion. Here that is changed, with the insinuation that actually, yes, the doll is a thing of evil. While we never get the Chucky levels of animation I always hope for, we at least move past the static Annabelle, as Brahms often turns his head, or moves his eyes when characters aren't moving. It raises the question of what came first - the doll, or the madman, as it is seen to have an influence over Jude that causes him to start acting, and to start dressing like the doll. Another change from the original is that the stinger at the end of The Boy is amended to feature a different character. Talking of ending stingers this one has a terrible one. I was surprised there was even a sequel, so to have another final twist that sets up the possibility of a third film was a step too far, just let it be!

There isn't too much here that excites but as a sequel it does enough of the things that I enjoy. Firstly the huge mansion makes a reappearance, it is a cool looking place. Secondly we have a character bringing the viewer up to date on what has came before. Groundskeeper Joseph (Ralph Ineson - The VVitch: A New-England Folktale) at one point talks about the dark history of the place, including a very brief summary of The Boy. It is from him we know the madman living in the walls was definitely killed. I liked the idea of Liza and Jude being traumatised as it allows the idea that things may not be what they seem. Liza, with her PTSD could just be imagining the doll is aware, as she is shown to hallucinate seeing her attackers on a few occasions. Elsewhere, with Jude he really could be projecting his own stress related issues by using the doll as a proxy for his outbursts of anger. 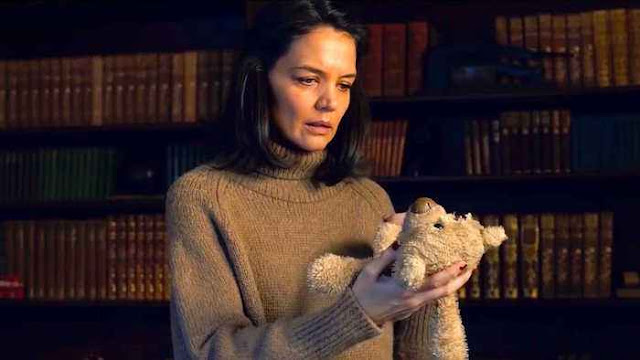 While Brahams has a good set up it is not the most thrilling film out there. The doll's antics extend to tipping over a table, and locking a door, hardly the most dramatic stuff. I was expecting an explosion of horror for the finale, instead not too much happens. The thing that does happen was a great twist, however due to some dodgy CG this twist was ruined somewhat. There was a wince inducing scene involving a broken wooden stake that I appreciated, but other than that, the supernatural hijinks may be high, but the peril to our protagonists always feels low. This is all fine to me, I didn't leave the cinema even half as grumpy as when I went in, I had a good time with the film, I also totally understand the complaints for this, it is a pointless sequel, much as The Descent: Part 2 was. I thought Ineson put in a spirited role as the groundskeeper, and I didn't find Convery that bad either, so they both made this more watchable than it would have been.

If you were one of the few fans of the original movie then you should check out Brahms: The Boy II, there is enough here to delight you. If, like me you thought the first one was a whole lot of nothing then there really isn't much point watching this. As I said previously though, I didn't leave the cinema begrudging the time spent with this one, but I did leave with my memory of it already fading.

Posted by Daniel Simmonds at 09:11