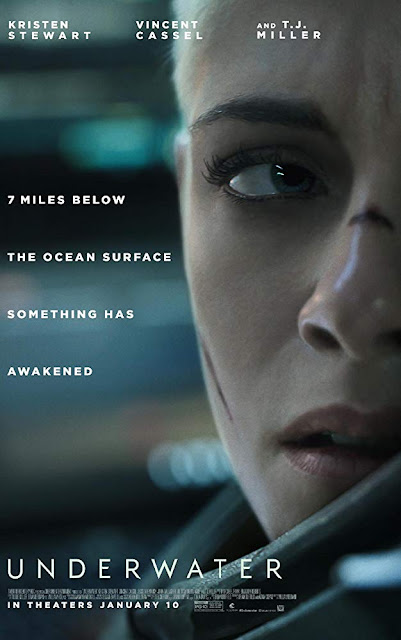 I wasn't even sure going in to watch Underwater if it was a horror or a disaster movie, it was hard to tell from the trailer. I was expecting something along the lines of Deep Blue Sea thinking maybe the threat here would be some type of animal, instead this falls firmly into the genre of horror. Some people say it is lazy to draw comparisons, but I feel if you have the knowledge of horror media why not put it to good use by sending out things that have similar styles and influences. So, for Underwater it shares elements with Gravity and, Aliens, video games Soma and Dead Space, as well as the works of a certain H.P Lovecraft.

Norah (Kristen Stewart - The Twilight Saga) is an engineer on a deep sea mining facility nearly seven miles under water. Some type of earthquake occurs which inflicts devastating damage. With the structural integrity at around 30% and all the escape pods destroyed or gone, her and a handful of other survivors, that include among them Paul (T.J Miller - Deadpool, Cloverfield), Emily (Jessica Henwick - Game of Thrones, Iron Fist), Smith (John Gallagher Jr. - 10 Cloverfield Lane, Hush), Rodrigo (Mamoudou Athie), and the Captain (Vincent Cassel - Westworld Season 3, Black Swan) must don deep sea suits and walk across the seabed to the next nearest facility, in the hopes of finding working escape pods. But, as the group soon learn, they may have far more to fear than just the impending destruction of the mining facility...

This really doesn't take any time at all to get going, within literal minutes of the film starting the base has started to fall apart. From the trailer I had imagined this would be along the lines of a disaster film, with the majority taking place inside, instead, after around ten to fifteen minutes the group have vacated the premises to begin their nightmarish (and very dark) adventure. I was actually impressed events started happening right away, I felt it was a bit of a brave move to give no time at all for character development, instead you kind of pick up the types of characters each one is as the movie progresses. I liked the actors here, and it was nice how many of them I recognised. I even didn't mind the token comedy character that Miller plays, putting aside the real life controversies he has been associated with in recent years I found his character to be inoffensive rather than annoying. It makes a change when the comedy character is actually a useful member of the team! There wasn't a character here that I didn't like, which made a change, usually you would have some sort of tension within the group. Here though I guess characters don't really have time for that, they have an objective and set out to do it working together.

With much of the film taking place in the sea itself I figured there could well be a lot of moments of darkness. I would lie if some of these outside sections didn't also become unavoidably the dullest moments. Every scene inside is great, and due to events that happen in the final third of the film these outside parts are also exciting. But, there is in the middle of the film some relative downtime with characters enduring trials and hardships, such as running out of oxygen, and getting their lines from their suits snagged on various things which is all shown by the poorly lit suits and the light they emit. If this had been too well lit though it would have ruined the atmosphere so I shouldn't complain too much about that. The special effects I thought were really quite good. I assume much of the world building exterior shots were some sort of CGI but they always looked decent, and for the scenes of destruction I found them to be exciting. The creature effects are also strong, without getting into too much detail for fear of spoilers I found the designs of these to be great, and some to be amazing, it led to some thrilling moments. I will say that there were far too many attempts at jump scares, and due to the more action packed scenes I never felt much fear at all, but plenty of tension at times. 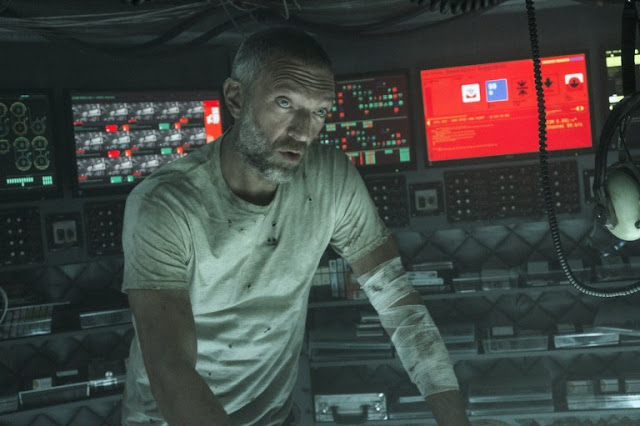 The story was simple, and followed a traditional route that I did expect. Needless to say but there are deaths along the way, each character virtually dying off camera. Water pressure is a hell of a thing! There are moments of disbelief and moments of convenience but the sets look good and the suggestion of being very deep underwater is well maintained. I had been expecting some sort of ancient ruins but there were none, I felt that would have made things very creepy. As for the way this ends, I liked the actual ending itself, but the credit sequence that includes a variety of newspaper headlines about the aftermath of the disaster didn't work too well, I didn't really see the point of what the viewer was being told.

I had zero expectations going in to see (sea?) Underwater, it wasn't a bad film, I certainly enjoyed moments of it, but I did feel a bit of a lull in the middle with the dark location sometimes creating boredom. The ideas behind the story I felt were a lot more interesting than the story itself, if only this had managed to be scary this could have been something special. As it is though, there are not many horrors that take place on the seafloor and so despite not being a stunning movie it is still worth a watch for something a little bit different.

Posted by Daniel Simmonds at 03:19