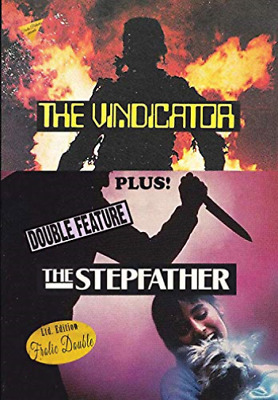 This review is something a little different as rather than write about an individual film I am instead reviewing a DVD double feature that contains eighties classics The Vindicator and The Stepfather. I have often mentioned Frolic Pictures latest releases and I have liked the idea behind them. They aim to replicate the experience of going to a drive-in of old by having two classics on the one disc. Rather than that be it though the features are bookended by trailers, notifications, and even the odd cartoon to really amp up the old school experience. So, after a short Superman cartoon, and a couple of trailers it is into the first feature; Jean-Claude Lord's The Vindicator.

David McIlwraith (Vampire High TV series) stars as Carl, a scientist working for a research and development company's special weapon project. After a disagreement on how the funds are being used he is killed on the orders of his boss Alex Whyte (Richard Cox). To add insult to injury Alex decides Carl's body will be used as a test subject for a new type of super soldier. The experiment is kind of a success, Carl awakens to find his brain implanted in a robot. However, before the scientists are able to attach the device that would allow them to control him, he breaks out of confinement and flees the lab. Knowing he was murdered by Whyte, and unable to be near anyone due to his suit's automatic response that makes him kill anyone who touches him, the reborn man sets out on a path of ...vindication. 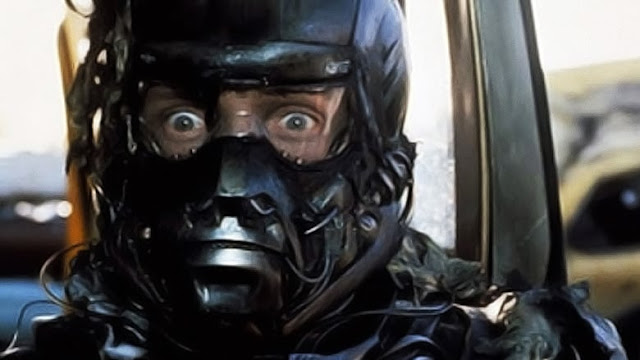 I had never heard of The Vindicator before watching it for review, but found it to be a great eighties action film. It is full of cheesy moments, and some classic tropes of the action genre, such as a vehicle immediately exploding in a ball of flame after it crashes off a cliff. This came out a year before Robocop did, yet this follows a similar style story. The biggest difference being that Carl is designed to be a tool for evil, rather than as a cop. There are plenty of great moments here, such as a sewer stealth scene, moments where Carl converses with his pregnant wife via a synthesiser, and a great showdown when Carl finally returns to the lab he was born in. Sometimes I struggled to make out what the robotic voice of the protagonist was saying, but mostly the story doesn't really matter. Some great death scenes here, including a biker getting his helmet crushed into his head, and one awesome bit where Carl crushes a man into the car he was trying to mow Carl down with! With wild eyes and a weird black suit this isn't really a character you can identify with, but has lots of stupid, yet fun moments. This made for a fun first half to the DVD double feature.

I thought that the second feature; The Stepfather wouldn't be as good as the crazy first film, yet I'm pleased to report I enjoyed this even more, thanks in no small part to Terry O'Quinn (Lost TV series) who was just plain fantastic as the gleefully evil titular stepfather. I enjoyed this one so much that I was delighted when I saw this had spawned several sequels. 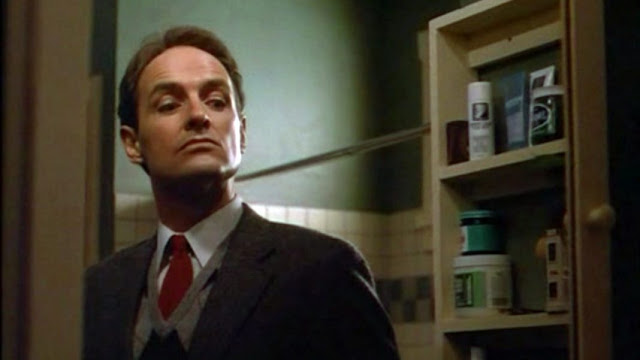 At the start of the movie O'Quinn's character casually leaves the house in which he has just murdered his wife and stepchildren, having changed his appearance first. A year or so later and now calling himself Jerry Blake he has married a new woman, Susan (Shelley Hack) and moved in with her and her teenage daughter Stephanie (Jill Schoelen - Cutting Class). Blake is obsessed with the idea of having the perfect family, and so when this starts to unravel he decides it may be once again time to take drastic measures.

I loved this one, again this is all so eighties. I thought it might be a bit nasty to begin with but thanks to O'Quinn this was wonderful stuff. I liked how the character has meltdowns when he thinks he is alone, and I particularly liked the moments when he forgets who he currently is. These elements gave some depth to his character. Being a psycho there are of course moments of horror, and they often surprised with just how suddenly violent things could get. A man gets his head beaten in with a plank of wood at one point, at another point a character suddenly gets smacked round the face with a phone! These moments were fun to watch, and there is enough blood to really sell the violence being inflicted. Films like this, and like The Vindicator just cement how marvellous the eighties really was for violent horror films. Back when the special effects were all practical things just look more raw, and more gruesome. My biggest complaint with The Stepfather is that this version has thick yellow subtitles in maybe Romanian or Spanish that when a lot is being said can cover up to half the screen, and so were distracting.

These two films combine to make a DVD double feature I had an absolute blast getting through. Both films are different enough that I never once got bored. While The Stepfather was the more enjoyable movie, I did like how crazy The Vindicator got. Replicating the look of the films from the time means the picture quality can often be kind of awful, but for me this just added to the charm. For fans of eighties horror I heartily recommend this double feature, lovely stuff.