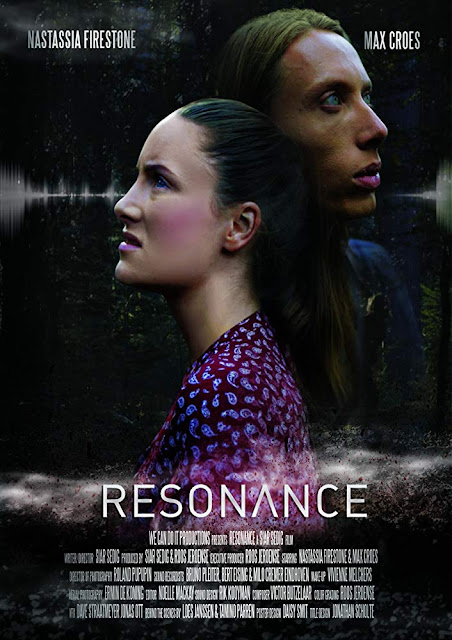 Resonance had a simple idea behind it, and one which I felt would work perfectly as a low budget indie horror. Directed and written by Siar Sedig (The Collector) this uses the simple location of a forest, a very small cast of just two, and a reliance on suggestions rather than showing any kind of peril. The question is, would this movie resonate with me?

Max (Max Croes - Rocketman) and his girlfriend Elena (Nastassia Firestone - The Collector) have gone on holiday to a remote cottage in the middle of a giant forest. While out for a walk the couple both get nose bleeds, not long after they start to hear a strange industrial hum resonating from deep in the forest. As well as this mystery, the two keep finding their bungalow door wide open, but always with no evidence anyone has been inside.

The idea behind this movie was so simple, and it works surprisingly well. The strange noise the couple hear that causes them all sorts of problems appears to be incorporated into the films soundtrack. On a few occasions the dronning noise worked both as an accompaniment to what was going on visually, the hum giving a feeling of something not quite right, but then is also acknowledged by the characters. I found this duel use of the sound to be quite clever. With sound being the threat it means visually there isn't much need for any sort of flashy special effects. Outside of the constant nose and ear bleeds the two characters get there are no special effects. The door constantly being open is another aspect that worked nearly as well. Just the sight of the door ominously hanging open always led to the anticipation of something really messed up about to happen.

For people who enjoy things being explained Resonance might not be for you. There are a couple of half hearted suggestions put out by the characters, but outside of that there is no explanation whatsoever. That these two people are in such a remote location, and having these strange events happen to them creates a feeling of unease that persisted right up to the end credits. There is the one scene that maybe hints at something more than what is revealed, but even that is wrapped up in mystery. Sometimes this goes against the films betterment though. I felt there was a missed opportunity with the motion detection trap Max sets up, showing anything rather than nothing would have helped.

With a cast of just two characters this would have struggled to be too long, as it is, sitting at 73 minutes this doesn't have time to get dull. There are prolonged moments when the film follows one of the two characters, which obviously leads to Resonance being a quiet movie. Of the two, I found the workaholic Elena to be a much more relatable character, she speaks the most sense out of the two, with Max far more inclined to want to ignore everything going on. I enjoyed the acting of Firestone more, but with Max you have a character who is less likeable. I felt there was a subtext of their relationship not being as strong as it at first appears to be. Like with Exit 0 I wondered if this trip was a last ditch effort to save a failing relationship. There are lots of camera shots of the forest, and this seemed to be a go to element to draw out the feeling of being isolated from the rest of the world. It succeeds though, as the shots just amplified the feeling of being truly alone, the beauty of the trees turned into a feeling of something not being right.

Resonance isn't a film that has a lot going on visually. What it does do marvelously is use what it has to create a strange, and at times unsettling picture. With a little bit more happening this could have been something more special, as it is this was an oddity of a film, and that isn't necessarily a bad thing. Resonance is now available on DVD thanks to BayView Entertainment.

Posted by Daniel Simmonds at 04:00