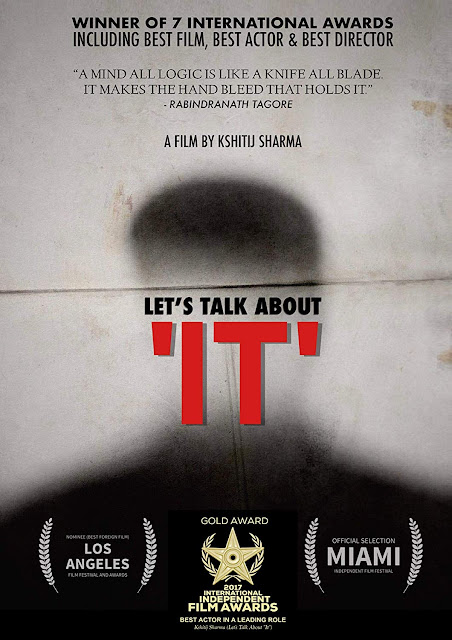 The award winning Let's Talk About 'It' is a low budget Indian horror film that was directed, co-written and co-produced by Kshitij Sharma, who also plays a supporting character here. With limited sets and a mostly uneventful story this is pretty no thrills, however the actual idea behind it really wasn't that bad.

Kavita (Deeya Dey, who co-wrote the screenplay as well as did the costumes and makeup) is a psychiatrist who one day gets a new patient, a scared man named Virat (Sharma). The man says he has been unable to sleep recently due to the appearance of a figure in his home who watches him. She arranges to see Virat in a few days time to see how the medication she has prescribed him is going, but the man turns up in even more of a state. Soon Kavita starts to experience strange events in her own home, and it begins to seem to her that what is plaguing her patient may be something that medical knowledge cannot fix. 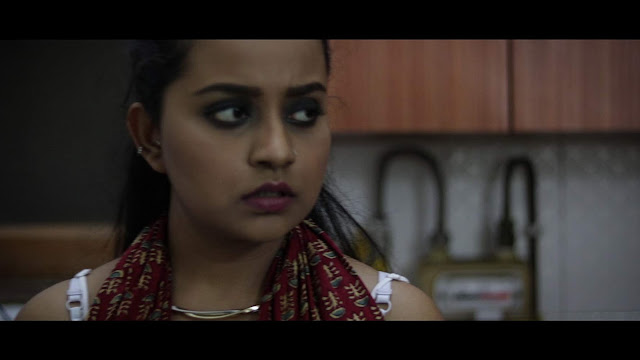 This is a no thrills horror that looks to create a feeling of tension and fear through psychological means, rather than having a lot of visual events happening. The eighty minutes is split almost evenly between Kavita's sparse and small clinic, and her larger home. Her conversations with Virat are the most rich moments of the movie, as outside of this, other than speaking to her receptionist, a Skype call, and talking to her mum over the phone she has no other interaction with anyone. It was interesting how Kavita seems to get infected by the ideas her patient has. The thought that everything happening could all be in the characters minds rather than real was mostly set out well, but a later plot twist seemed to come out of nowhere. The last eight minutes take a far different turn that I didn't see coming, but which I also felt side stepped the point of the main story.

There are nearly no special effects here, you get the odd cupboard or door opening on its own, a chair moves across the room at one point, and creepy voices can be heard. There isn't anything more than this, with Let's Talk content for the psychological aspect to create the chills. I did like how isolated Kavita is but I never felt much concern for her wellbeing, I think a few more special effects, or events happening and I would have been, as her isolation does help build up a feeling of something not quite being right. The culmination of all this didn't really land well with a finale (before the twist) that just seemed run out of steam. The film looks quite basic, but then it is obviously low budget. It also has quite a eclectic soundtrack that features a soft cover of Metallica's Enter Sandman as well as a couple of Christmas carols. These felt like weird inclusions, but then there are signs around Kavita's home that she is fond of Western culture. This is mostly in Hindi, with English used occasionally, but the subtitles were perfectly fine.
The acting was all decent, but it was quite an uneventful film that I felt could have benefited by more scenes of Kavita and Virat together as they were the most enjoyable moments. The actors were good in their roles but there was never too much development with their characters.

Let's Talk About 'It' was an interesting horror, one that isn't concerned with throwing spectacle in your face, but rather letting the psychological tension simmer. With some strong actors I felt the only thing that let this down was too many moments of scary things happening, but only happening at a low threat level, the plight of characters never really becoming a concern. This may be rough around the edges, but within there are some moments of good horror to be found. Let's Talk About 'It' is available on DVD now, thanks to Bayview Entertainment.